The following is a work-in-progress feature for the TFB project. This page will be moved within this Wiki if and when the feature described here is completed.

Using the upcoming composite scores for frameworks as a basis, we will be providing a new measurement of the performance of the hardware environment used to run our tests. Some lightweight arithmetic will massage the existing results to yield a simple numeric representation of an environment's relative performance. For example, the current Citrine environment used for our official results currently is measured at "416" with the current arithmetic (with placeholder weights), which is detailed in a later section of this page.

This hardware performance measurement may be of interest to a new audience of users who want to assess the abstract capacity of hardware in a web application server role. The utility of this is, at present, unknown. But the level of effort necessary to compute a hardware score is relatively minor, so we plan to offer it and see if it finds interest.

The following is a work-in-progress rendering of Citrine's TPR-3 score. 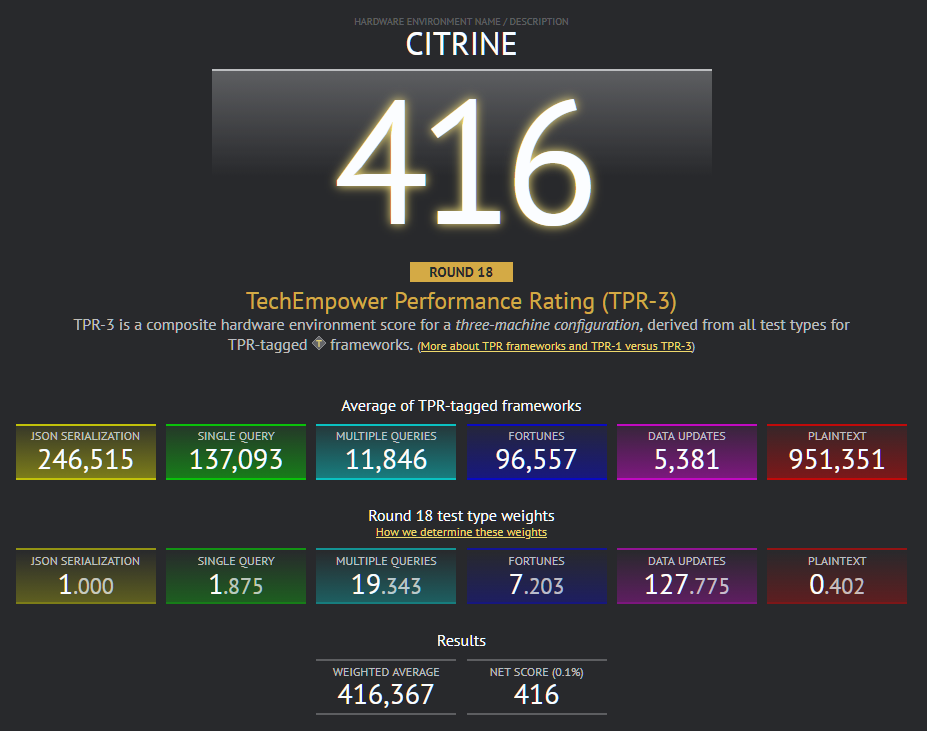 As a placeholder name that may or may not be replaced later, we are calling the resulting score a TechEmpower Performance Rating (TPR).

Historically, we have recommended that any measurement of web app framework performance be conducted in a three-machine configuration (application server, database server, and load generator) for two reasons:

However, for a hardware performance measurement, these constraints no longer apply. Conversely, hardware measurement often has a different constraint: You often only have one unit of the machine being tested. So for hardware testing, we will encourage a single-machine configuration.

Scores from three-machine and single-machine configurations should not be compared. So we will identify them as two separate measurements:

Hardware performance scores will be associated with a specific "Round" of this benchmarking project. Unlike the traditional framework performance side of the house, where dynamism and continuous changes to the implementations are expected, the hardware measurement side will rely on a fair degree of stasis.

We will be separating the toolset from the framework implementations, creating two GitHub repositories where there is presently one. Doing so will allow us to create tooling that can pull a specific Round from the frameworks repository based on a commit label (e.g., "Round 19").

Currently, the full benchmark suite takes approximately 100 hours to complete, regardless of the hardware environment. This is due to the very large number of frameworks and permutations that exist today thanks to numerous community contributions. However, for measuring hardware performance, we want to provide a execution scenario that completes in less than 1 work day (less than 8 hours).

In order to reduce the total execution time in the hardware-testing scenario, we will introduce a new notion of flagging the frameworks that should be included when executing the hardware performance measurement scenario.

We have the following goals for TPR-tagging frameworks:

We seek community input on selecting frameworks for TPR. But a tentative list is:

It remains TBD whether the TPR-tagging will be at a framework/project level or at a permutation level. Presently, the TPR scoring algorithm will select the best performance for each test type from all permutations provided for a framework. However, supporting the full set of permutations may run counter to our effort to minimize execution time, so we may move the flagging to the permutations (e.g., allowing a framework's "Postgres" permutation to be indicated as part of TPR, skipping its MySQL permutation).

We will include a small icon to indicate frameworks that are TPR tagged and are therefore included in the hardware scoring.

In addition to the obvious new "Composite scores" section and rendering of the TPR score, the results web site will see some minor changes:

The TPR scoring algorithm is intended to be fairly simple.

We have the following goals for scoring hardware performance:

Note these goals come from both the needs of TPR hardware scoring and composite scoring for frameworks.

As a result of the goals above, we are tentatively considering the following bias coefficients per test type:

These per-round weights will be rendered on the results web site, along with a link to a wiki entry (like this one) describing the scoring algorithm.

From the above weighted scores for each test type, we: