Stamper is the tool which should be used by the administrators of Diavgeia in order to store public sector decisions on the bitcoin blockchain. The stamping procedure is described as follows:

A stamping transaction in our model consists of two outputs and one input. The first output contains the OP_RETURN opcode followed by the Merkle root in the scriptPubKey output scriptPubKey = OP_RETURN + Root. This output guarantees the immutability of decisions. The second output is a pay-to-pubkey-hash, having as pubKey the next derived public address of the HD wallet. The input scriptSig consists of Diavgeia's signature and the current publicKey derived from HD wallet (scriptSig = signature + publicKey). The size of a stamping transaction is 267 bytes. In order to have certain guarantees that our transaction will be written into the next block and confirmed nearly immediately, mining fees can cost up to 120,150 satoshi (0.00125 bitcoin), which at the time of writing roughly amounts to $16.84.

A visualization of the procedure: 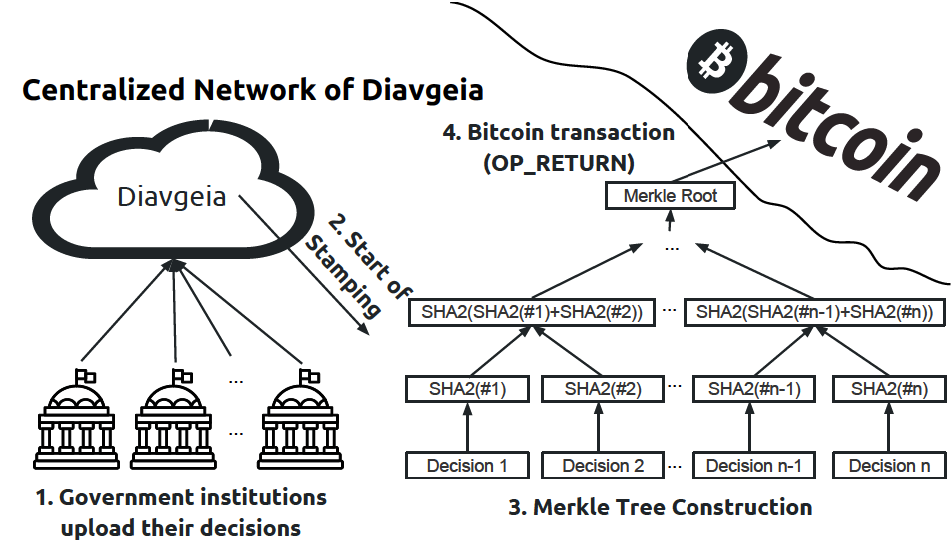 After the end of each stamping transaction, Diavgeia publishes to its website the transaction identifier (Txid) and the order of decisions, as used for the Merkle tree construction. It also publishes once, the Master Public Key of its HD wallet. By publishing Diavgeia's master public key, interested parties are able to track the sequence of public keys and stamping transactions of Diavgeia. These publications are necessary to be made for the proper functionality of the Consistency Verifier.

The Stamper tool provides high levels of immutability guarantees, especially when t value is configured to be small. Generally, the threat of a decision's modification or deletion appears on the time gap between two consecutive stampings. Small t values imply more stamping invocations and as a result Diavgeia creates more stamping transactions, but this comes at a higher cost. We consider a t value ranging from 3 hours to 1 day, to be an affordable solution for the government, since the daily cost of the usage of the blockchain will range from 0.00125 to 0.005 bitcoin ($16.84 - $134.72). The threshold for a decision's modification is also small, since an adversary (the administrators of Diavgeia, the government or other public authorities) are able to modify the decision in the next 3 hours to 1 day after its publishment.

As mentioned, the Stamper tool uses the open source bitcoin library (bcoin) in order to create the stamping transactions and relay them to the network. DiavgeiaRedefined does not use existing blockchain timestamping services (such as Stampery or OpenTimeStamps) because, in case of a foul play by an adversary, these third-party services might be accused of having modified the Merkle root in the first place.

The application uses the node-config module, in order to easily configure its settings. Before running the application, you have to first define a .json file having the same keys as of this json file. For instance, consider the following configuration:

wallet_location : The path in which .bcoin components (database, chain, wallet) will be stored.

network : The Bitcoin network in which decisions will be uploaded to. The value can be one of main, testnet, regtest, segnet4. Main corresponds to the main Bitcoin Network and this is the value that should be used in production. For testing reasons i highly recommend to use testnet as you can get free BTC and experiment with the application without worrying about real BTC.

The main script which is responsible for committing the decisions to the Bitcoin Blockchain, can be found at src/scripts/main.js. This script provides the following three functionalities:

This is the procedure that one may follow in order to test the application.

The Stamper tool does not guarantee you against theft or lost funds due to bugs, mishaps, or your own incompetence. The administratiors of Diavgeia alone are responsible for securing the money.