An RPG based on Dragon Age using jQuery 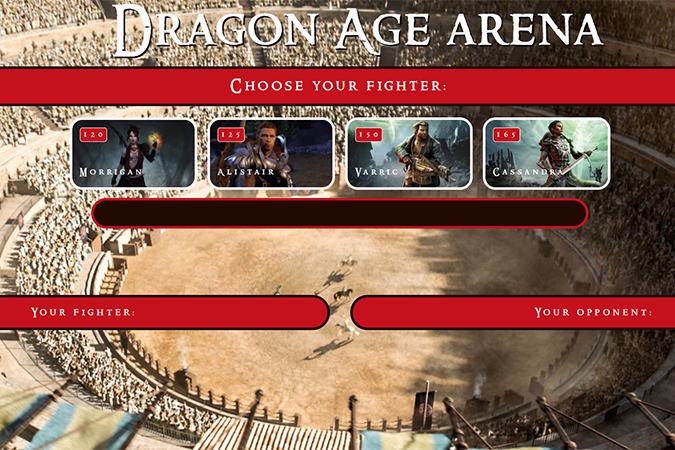 An RPG based on characters from BioWare's Dragon Age series of games. All characters, music, and the name Dragon Age are copyright BioWare.

Each character available to the user has 3 unique values:

The enemy attack power for the opponent remains constant during the battle, but the fighter gains an increase to attack power by the base value with each click. This increase carries over between opponents until the user wins or loses.

Each character has the ability to win and lose the game, and the strategy comes in figuring out the order in which each fighter should fight the other opponents.

Main theme music and winning music can be toggled on/off at any point during the game. Sound effects cannot be turned off.

The main theme music starts when the game loads, except on mobile/tablet where autoplay is disallowed. On these devices, the theme music begins when the user selects their fighter.

4 Dragon Age characters were included in the game:

This is a simple RPG built with jQuery. It expands on previously learned JavaScipt concepts, but it uses the primary advantages of jQuery in the construction of the game:

An RPG based on Dragon Age using jQuery