Each ziftrCOIN will have a minimum redemption value of $1 within the ziftr merchant network for up to 5% of the customers transaction.

ZiftrCOIN Core is released under the terms of the MIT license. See COPYING for more information or see http://opensource.org/licenses/MIT.

A few new configuration parameters have been added:

In addition, the "-rpcuser" configuration parameter now has an extra function. If it is a valid ziftrCOIN address, then any coins that are mined with that node are sent to that address. The code for this can be found in miner.cpp:CreateNewBlockWithKey.

These are the main features of ziftrCOIN.

The block size limits are stored in the CChain class, defined in main.h and implemented in main.cpp. Internally, the blocksize limits are stored in CChain's mapBlockSizeLimits property, which is a map of block height to limit at that height, with the caveat that the keys are multiples of 3 months (every 131400 blocks). Whenever a new tip is set via CChain::SetTip, the mapBlockSizeLimits is kept up to date.

ZiftrCOIN uses a mining process that can be configured to prove that a miner has knowledge of the transaction data they are mining. When mining with proof of knowledge turned on, you can claim 5% more in your block rewards.* Proof of Knowledge mining requires that you prove you know the transaction data in your block, meaning you likely built the block yourself instead of blindly mining on work that a pool operator gave you. This levels the playing field for mining pools and miners who build blocks themselves, as the pools will make less money without the 5% bonus but will also have less variance in rewards, due to the pooling of hash power.

The technical details of mining with and without Proof of Knowledge follow.

The mining process basically consists of:

The byte-masks for the nVersion field are shown in core.h. The selection of which transaction data to prove knowledge of is shown in core.cpp.

One of the nice things about proving knowledge of transaction data by pseudorandom sampling is that it can be verified with much less data than was required to actually mine the block. For example, an SPV node can verify a block header by downloading the header and just one extra transaction with its merkle branch.

Also note that the reason that the POK_DATA field is set each time regardless of whether you are mining with PoK or not is to keep mining with/without PoK as similar as possible, so that their work/hashes can be compared. Mining with PoK involves an initial serialization and then then an additional XOR each time, but the serialization is just done once (per update of merkle root) and the XOR is very fast.

All that is left is to explain what happens in ZR5. As mentioned above, ZR5 (ziftr's set of 5 randomized algorithms) is basically a chained hash, with Keccak executed first and then the next 4 (JH, Grøstl, Skein, Blake) done in a pseudorandom order dependent on the result of the Keccak. The code for this is in hash.h.

A sample ZR5 hash is included here for anyone looking to implement a compatible function:

This is a feature added to the scripting language for verifying the validity of spends. It allows you to create a transaction output which cannot be spent until a certain time in the future.

Bitcoin recently soft-forked in OP_CLTV, but ziftrCOIN comes with both OP_CLTV and its counterpart OP_CLT built in. OP_CLT is basically OP_CLTV with an OP_VERIFY right afterward, where OP_CLT just pushes the boolean on the stack instead of verifying that it is true, which can be useful in some cases. OP_CLTV verifies that a spending transactions locktime is set, is in effect, and is at least a certain time specified by the script. Since transactions cannot be mined that a lock time that is in the past, OP_CLTV essentially creates outputs which cannot be spent until a certain time in the future. The relation looks like this:

The inequality that we actually care about is the inequality above without the middle parameter, so as to make sure that the real time that a transaction is spent is after the time specified in the script that uses OP_CLTV. The spending transactions locktime is a convenient intermediate comparison.

ZiftrCOIN uses a custom chain tie-breaking algorithm to choose locally correct chains in the event that a new block is solved while another is propagating. When nodes hear of a new solved block, they essentially start a 13-second timer. If before the timer ends, the node hears about a new block and the new block spends more mature coins than the alternate block did, then the node will choose it as the tip of the new correct chain. This will allow the network to quickly come to a consensus as to the correct chain in the event of multiple blocks simultaneously being solved.

The chain with the most work is always considered the correct chain. However, when two (or more) blocks are solved on the tip of the chain near simultaneously, the one that spends more sufficiently old (older than 1/2 a day) coins is chosen as the correct block. Near simultaneosly means the node hears about the second new block within 13 seconds of hearing about the first new block. This gives an incentive to include transactions.

In the code, the number of sufficiently mature coins that each block spends is stored in each CBlockIndex, in the nMatureCoinsSpent property (defined in main.h). This field is populated when main.cpp:CountMatureCoins is called, which is called by main.cpp:AddToBlockIndex. Only coins that are older than the TRANSACTION_MATURITY_DEPTH are added to the mature coins count, and there is no multiplier.

After the mature coins are counted, then instances of CBlockIndex are compared to find the best chain in the main.cpp:CBlockIndexWorkComparator comparator. This comparator first compares by work, then by height, and then, if all of the necessary preconditions are met, it will compare by the number of mature coins spent in a block. Those preconditions include checking that the second received header came in less than 13 seconds after the first received header.

Most coins have a constant reward for a period of time and then that reward halves at a fixed frequency. The distribution of ziftrCOINs, however, follows a standard bell curve, as that is typically predicts the rate at which new technologies are adopted. The block reward is constant throughout the day, changing after a day's worth of block. This curve was chosen to model the adoption rates of new technologies.

The formula for the bell curve distribution is below, where x is a constant spread multiplier times the number of days from the half way (15 year) marker. 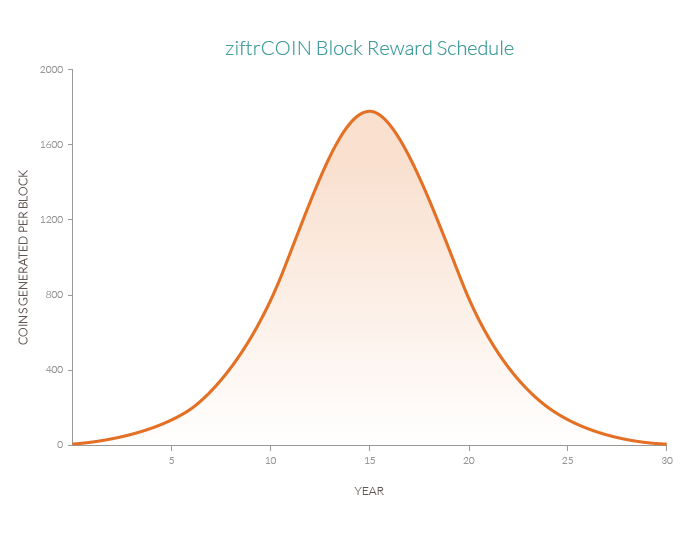 ZiftrCOIN uses the same basic approach to calculating the next difficulty, although the frequency that this calculation is done is much higher, at once every 4 blocks. In addition, rather than a 10 minute block time, we use a 1 minute target block time. These constants are defined in main.cpp, as RETARGET_INTERVAL and TARGET_SPACING.

In ziftrCOIN, this bug has been fixed by standardizing the blocks chosen as to calculate the next difficulty, ensuring that the last block of one period is used as the first block in the next period. As noted, the relevant code is in main.cpp:GetNextWorkRequired.

What Defines a Coinbase Transaction?

Bitcoin requires that a coinbase transaction have only one input and that it have less than 100 bytes in its scriptSig. We found this to be unnecessarily restrictive, and changed the MAX_COINBASE_SCRIPTSIG_SIZE to be 250 bytes, and allow up to 25 inputs in the coinbase transaction. The script size limit is checked in main.cpp:CheckTransaction and the number of inputs is checked in core.cpp:CTransaction::IsCoinBase().

All unit tests are passing. Note that strict DER encoding is required in ziftrCOIN.

The integration and regression tests (qa folder) have not been updated, so they cannot be expected to run successfully.

The GUI has been completely redone, and looks quite good.

To edit the GUI, you should use QT Creator, available at http://www.qt.io/download-open-source/.