This experiment depends on internals of ``aiohttp`` which tend to change often and increase in complexity. It isn't maintained any longer.

django-c10k-demo is an experimental playground for high concurrency in Django with WebSockets.

It was originally written to handle 10 000 concurrent real-time connections to Django, hence the name.

This demo is a distributed Game of Life. One client manages the life of one cell. Clients connect to a server through a WebSocket and register to receive updates from their neighbors. The server coordinates the startup sequence and relays messages between clients, but it doesn't know anything about the rules of the game; all the logic is handled by the clients!

The page in the browser registers to receive updates from all clients, and updates in real time as soon as the workers start running. Alive cells are dark, dead cells are light. Their hue shifts slightly at each step to show how the grid updates. 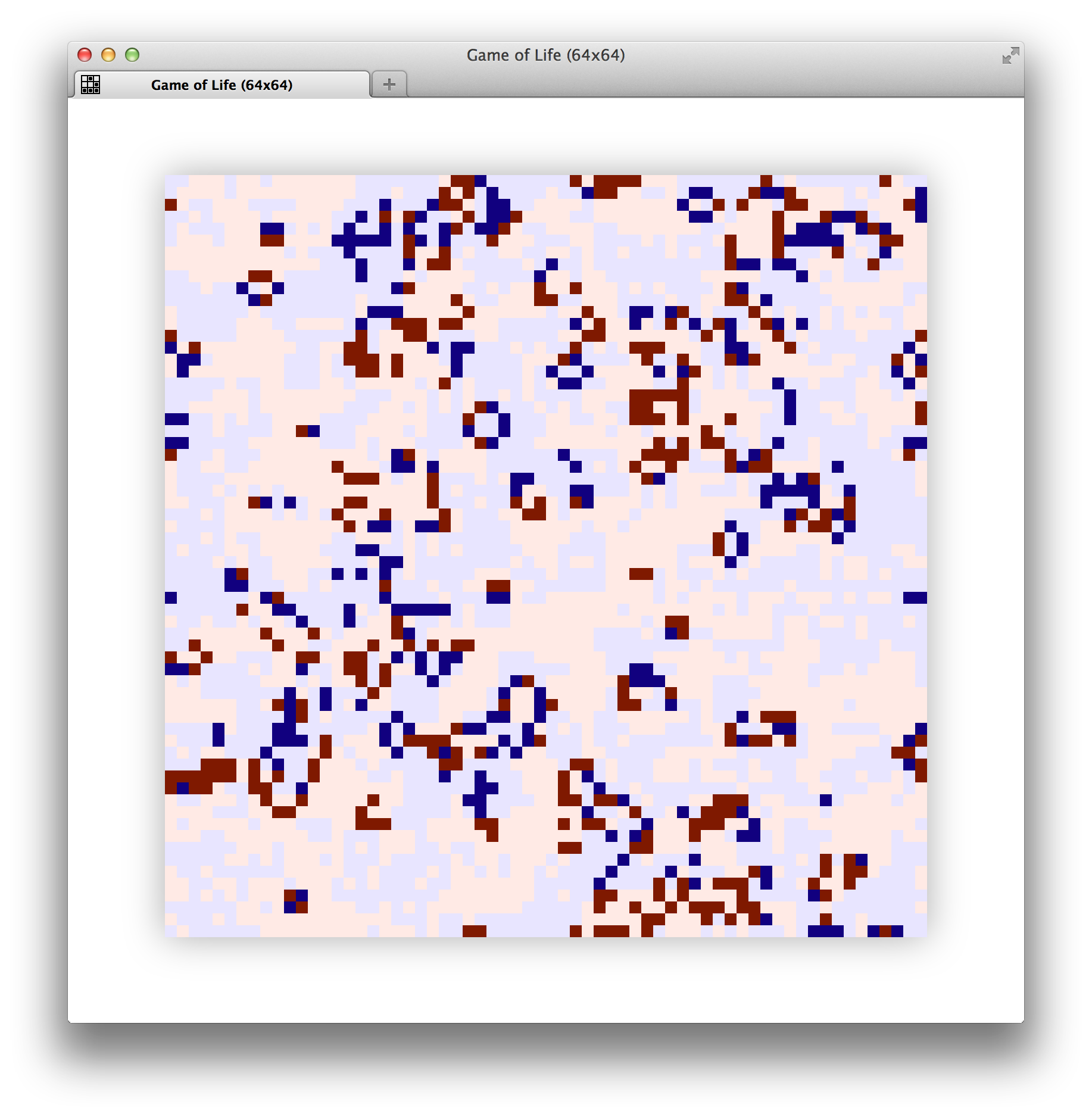 gameoflife accepts a number of options to configure the game:

This is the original demo in this project. It handles 10 000 concurrent real- time connections to Django.

runserver shouldn't display anything and testecho should show the number of connections, peaking at 10000 clients are connected!.

The connections are established over a period of two minutes. Once connected, each client repeats the following sequence three times: wait one minute, send a message, and read the reply of the server. Clients also receive a welcome and a goodbye message from the server. The entire demo takes five minutes if your system is fast enough.

If you don't reach 10 000 connections, it means that some clients finish their sequence and disconnect before all the clients are connected, because your system is too slow. If you see exceptions, it means that your OS isn't tuned correctly for such benchmarks. Decreasing CLIENTS or increasing DELAY in testecho may help in both cases.

Here are the underlying components in no particular order, with some hints on their quality and reusability.

Here's an example of a WebSocket echo server in Django:

This doesn't allow sharing an URL between a regular HTTP view and a WebSocket handler, but I'm happy with this limitation as it's probably a good practice to keep them separate anyway.

The @websocket decorator should only be applied to coroutines. It takes care of closing the WebSocket connection when the handler terminates.

Hook for the upgrade to WebSocket

The API described above requires the upgrade from HTTP to WebSocket to happen after Django's URL dispatcher has routed the request to a view. As a consequence, the upgrade must be performed within the framework of WSGI.

PEP 3333 predates real-time on the web and PEP 3156 doesn't propose to update it. This point might be addressed by a future version of the standard (PEP 3356 anyone?) In the meantime our only choice is to bastardize WSGI, steering away from compliance — sorry Graham.

The WebSocket opening handshake is completed by sending a HTTP response. This is achieved with WSGI, but it isn't compliant because the response includes hop-by-hop headers, Upgrade and Connection.

This component can be used independently by adding the 'c10ktools' application to INSTALLED_APPS. It monkey-patches the django-admin.py runserver command to run on top of the asyncio event loop.

Of course, this stack is experimental. It's unlikely to ever become "production-ready". Use it at your own risk!