Getting Started with Video 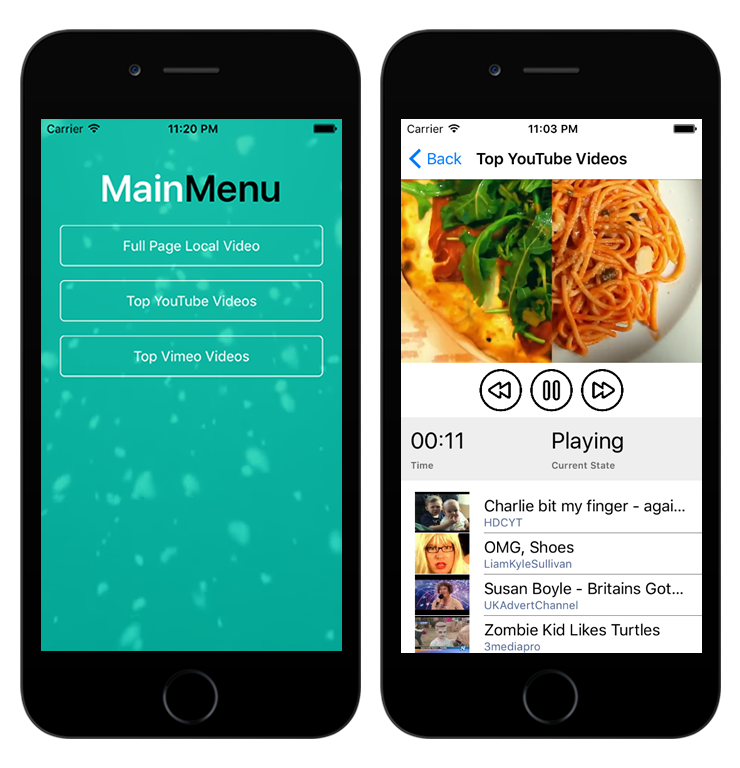 When adding a video player to a Xamarin.Forms application, Octane.Xam.VideoPlayer is a a separate NuGet package that you should add to every project in the solution using the NuGet Package Manager (see Walkthrough: Include a NuGet package in your project).

After installing the NuGet package, insert the following initialization code in each native application project:

This call should be made after the Xamarin.Forms.Forms.Init() method call. The Xamarin.Forms templates have this call in the following files for each platform:

Once the NuGet package has been added and the initialization method called inside each applcation, Octane.Xamarin.Forms.VideoPlayer APIs can be used in the common PCL or Shared Project code.

3. Create a Video Player in XAML

The snippet below shows the most basic example of using the video player. Be sure to check out the Chill Player example application for more advanced example usage as well as all of the documentation that follows.

When developing on Android, you will need to use a real device to debug your application since the emulator is likely not powerful enough for video playback.

Shown below are the complete set of options available with the VideoPlayer control and the possible values separated by the bar symbol. All properties of the player are documented extremely well in code comments if you need more information on a specific property. Due to the vastly different nature of video playback on each platform, the properties and events below are the common ones that all platforms share.

The Source property takes a VideoSource which behaves very similarly to the Xamarin Forms ImageSource. The same behavior and logic described in that documentation can also be applied here by using VideoSource instead of ImageSource.

This component gives you the ability to subscribe to a wide variety of events that typically occur during video playback with the event handlers below. The EventArgs that are passed to each event firing contain a wealth of information about the current state of the player (current time, total duration, volume level, etc.).

It's also possible to bind other Xamarin Forms controls such as buttons to common video player operations noted below. This could be useful in situations where you want to create your own cross-platform buttons for these operations and perhaps set DisplayControls="False" on the video player.

You will want to make sure the video files you play are compatible with the mobile platforms you are targeting. Android, iOS, and Windows Phone all have documentation on the media formats and baseline encoding parameters they support.

This video player component requires a valid URL to a video file with a file extension (for example: .mp4, .webm, .avi). If you want to use a video codec that works on the majority of devices, use H.264-encoded video in MP4 files.

Without some help, the native video players on mobile devices are unable to stream URLs directly from popular video hosting sites like YouTube and Vimeo. There is a little more work involved to get the correct URL for playback. The XAML markup extensions for Vimeo and YouTube shown below are provided as a convenience in the Chill Player sample app and are not guaranteed to be as reliable as integrating the YouTube or Vimeo APIs into your application. They are provided as experimental functionality.

You can access these markup extensions by adding the following namespace to your XAML page:

Depending on what you are using the video player for, you may need to add some of the following permissions to your manifest files for each respective platform.

If you are using the video player to stream network-based content, your application must request network access.

If your player application needs to keep the screen from dimming or the processor from sleeping.