HEXXX is a DIY 3-player console with a hexagonal grid of 400 RGB LEDs, 6 game buttons, and based on a Raspberry Pi. HEXXX is being built at http://opengarage.org

Click the image below for a video of our kids playing "Tron for three" on the HEXXX ...

For development without the hardware, HEXXX applications can be run in a HEXXX simulator on systems that supports building with SDL (http://libsdl.org/ - Mac, Linux confirmed to work). More video:

The repository contains various demos, such as Pong and Tron for three, Flappybird for 6, a X11 screengrabber and a cube demo. The sample application in example.cpp shows you how to build your own HEXXX apps.

The repository also contains the Inkscape SVG files for laser cutting and documentation to construct your own HEXXX hardware. 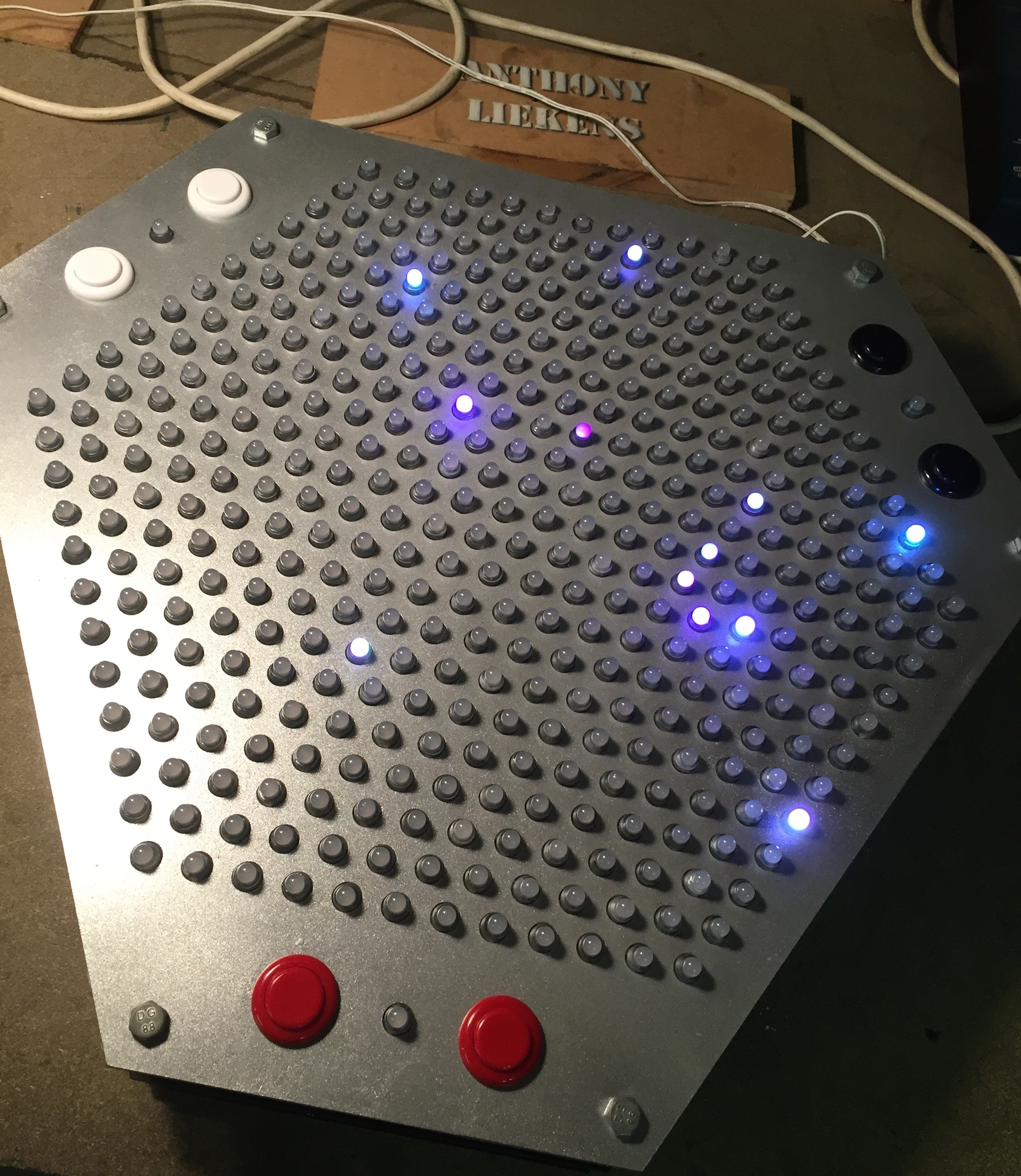 X11 is mainly required for the screengrab example. Install libx11-dev with

For the simulator, you'll need SDL2 (http://libsdl.org) and SDL_gfx for SDL2 (https://github.com/thp/SDL_gfx). To check whether you have SDL, run sdl2-config, which should be an existing executable.

LibSDL2 can be downloaded from https://www.libsdl.org/download-2.0.php, with binaries for your Mac or Windows development machine. Mind that the binary distribution only includes the runtime framework and not the binaries (e.g. sdl2-config). So for development, you will need to grab the sources and compile them.

SDL_gfx can be installed with

The HEXXX source code comes with a simulator based on SDL, on which you can simulate LEDs and button presses.

In order to compile the SDL example, run

which generates a bunch of *_simulator executables.

How the simulator works

The interface (and main loop of the programs) defined in hexxx.h is implemented in hexxx.cpp to work on the Raspberry Pi only, because it tracks GPIO for button presses and uses Raspberry Pi-only hardware to light the LEDs. The rest of the whole framework is hardware independent.

The alternative hexxx_simulator.cpp also implements the hexxx.h interface, but contains calls to SDL to handle graphics and button presses. Linking your application with hexxx.o and hardware-related libraries makes it run on the hardware, while linking with hexxx_simulator.o and the SDL library provides us with a simulated version of the HEXXX application.

The simulator also support erroneous LED illumination with a faked Gamma error. The library in color.h supports Gamma correction, but it needs to be used pro-actively (except when using video buffers as in buffer.h, which handles Gamma correction upon copying to the actual screen).