Pollendina is an X.509 identity provisioning service designed to simplify mutual TLS authentication for microservices deployed in containers... and without distributing secrets!

Pollendina is an X.509 identity provisioning service designed to simplify mutual TLS authentication for microservices deployed in containers. This project helps you provision your PKI as easily as you provision containers and exposes an API for integration with your existing scheduling / deployment infrastructure.

Pollendina accomplishes this without distribution or centralized management of secrets!

Authentication and authorization are difficult to implement in any meaningful or secure way. This is even more the case in a microservices infrastructure. One reason authentication is difficult for services is that the actors are not human, and instead of relying on human memory or some password vault machines need their secret keys stored somewhere. That fact creates a long conversation about how and where to store passwords, and then how to get the passwords to the machines or containers running the microservies. But password management is only one issue.

The second big question is, "What should my authentication protocol look like?" A quick answer for HTTP service owners might be using HTTP basic auth. This approach is better than some because it moves the act of authenticating out of the application protocol and into the underlying HTTP protocol. However HTTP basic auth has a few issues. The biggest issue is that it requires pre-sharing cleartext passwords. The next issue is that it is expensive to maintain large sets of users.

In an ideal situation you should be able to authenticate unique instances of a client service. It is unlikely that you will want to do so if you use preshared keys and a user management system that is painful to scale. More often than not, developers end up using a single password for each client service. In that situation it becomes more difficult to determine when a key has been compromised and more likely that a key will be compromised.

The general solution to this problem lays in two key cryptography and three party trust protocols. These are the foundation of SSL/TLS. Most people use SSL/TLS every day when they access and HTTPS URL. In that case their web browser is authenticating the remote web server by verifying that the common name in the certificate presented by the web server matches the host name they were trying to access. However, TLS connections can be, "mutually authenticated." In such a scenario, a server presents it's certificate and then a client presents its own. The server can then examine the certificate (just like the client does) and decide if it can trust the certificate. If it can, then it can identify the client by the common name in the client certificate. Yay!

Working with certificates is epicly painful. If you want to get a good sense for just how painful open Google and start typing, "pkix." The auto-suggest feature will show a list dominated by poor Java developers trying access an HTTPS service or website in development.

The reason that working with certificates is so painful is that it is difficult to get a signed certificate. They are prohibitively expensive to buy, difficult to generate (the OpenSSL command line and config files are the absolute worst), and maybe even difficult to install into the trust store for your browser/language of choice.

Pollendina does the hard work for you. The Pollendina service (distributed with Docker) will provision a new certificate authority for you with a single command and produce a server certificate that you can predistribute to your Pollendina clients (your microservices). The service does two things, sign certificate signing requests (come from the clients) and accept pre-authorizations from your provisioning/scheduling infrastructure (more on that later). Each client (read container/VM running a microservice and the Pollendina client) will generate its own unique private key and certificate signing request at startup (just-in-time) and retrieve a signed certificate from the Pollendina service. The keys only blink into existance once the container / VM has been provisioned.

Since Pollendina enables clients to retrieve signed keys just-in-time (sub-second latency) and there is no cost associated with each certificate, you could use Pollendina to build a mutually authenticated TLS infrastructure for all of your microservices with very little effort. Its use scales easily to infrastructures that provision thousands of short-lived instances of a microservice.

Mutually authenticated TLS is the best and correct authentication mechanism for a microservices environment. Pollendina makes establishing your own public key infrastructure simple. 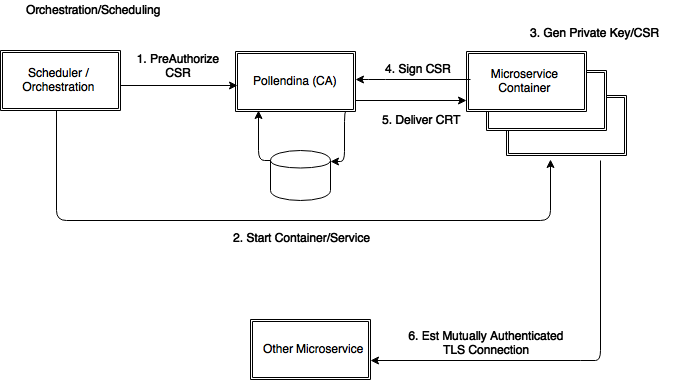 Provisioning a service for use in a new container would consist of the following steps:

The above command will start Pollendina in a new container and provision a new CA in the present working directory. The files created at PWD represent the full state of the CA. If Pollendina is stopped, and another Pollendina container is started from this folder it will resume the state of the previous CA. One file named openssl-ca.cnf is created. You can customize the settings for your CA by modifying this file and restarting Pollendina.

Adopters using Docker should not need to run a custom build. Both the service and client are available as automated build images through Docker Hub. The latest tag will always contain the latest source from MASTER. Other adopters can download releases from the releases page of this repository.

If you are working on Pollendina, you can use the Dockerfiles for each portion of the project or build it yourself using the Go compiler. Instructions are as follows.

You can build the service as a Docker image or as a stand-alone binary. Either way the following build instructions use Docker because I hate installing and managing arbitrary packages on my machine. As the project progresses I might just breakout the service and client into separate repositories and make them go-getable.

To build the Pollendina service image:

To build the Pollendina service binary:

The native client is currently a single binary file. In the near future there will be two distinct build artifacts, a CLI client, and a composable program designed for use as a contianer entrypoint.

To build the native client:

Pollendina was conceived in the months leading up to DockerCon 2015. Jeff Nickoloff submitted the idea for a hackathon project based on real world needs he encountered building microservices. During the hackathon he met and was joined by Dário Nascimento, Jason Huddleston, Madhuri Yechuri, and Henry Kendall. Each member of the team brought a unique set of skills and experience. They decided to use Golang where they could, shell and OpenSSL for the especially sensitive portions of the project in an effort to maximize their chances of building a working proof of concept. They worked through the night and Jeff presented the project for the judges the next day. The project took second place.

With a working proof of concept, and a real need for the project in development of other services, Jeff and a few other team members decided to continue development after the conference.

Prior to provisioing a container for a microservice, the provisioning agent should post an authorization to Pollendina at /v1/authorize.

After the authorization has been registered, the provisioner should pass the token to the new container as an environment variable. That new container will then make the call to /v1/sign/ to retreive a signed certificate.

There is a great answer on StackOverflow that goes over running a certificate authority, and creating certificates at: http://stackoverflow.com/questions/21297139/how-do-you-sign-certificate-signing-request-with-your-certification-authority

Pollendina is an X.509 identity provisioning service designed to simplify mutual TLS authentication for microservices deployed in containers... and without distributing secrets!