What is NAT pinning

###Connection Tracking Connection trackers are modules within netfilter that enable protocols that require secondary connections to operate on NATted networks. Take into consideration the following example of an FTP session 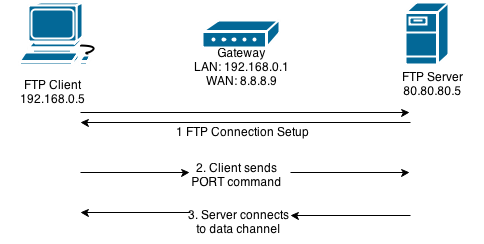 In step 1, the client initiates an FTP connection with the FTP server. At this point, the gateway performs normal NATting operations.

In step 2 the client wants to instruct the FTP server that it wishes for the data connection to be setup on ip 192.168.0.5, TCP port 62001. This is done via the FTP PORT command. PORT 192,168,0,5,x,y Whereby x,y donates the port number. As there is no way the FTP server could respond to this command, as 192.168.0.5 is a private IP address this would break FTP operations. This is where connection trackers on the gateway come in to play. When they see this PORT command passing through, they will perform two actions:

The operations described above are to be considered normal and are required to have some protocols functioning on NATted networks.

For example, the following Javascript will send the FTP Port command as shown in the diagram above.