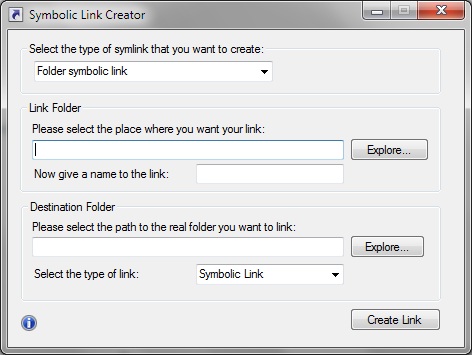 Back from the dead. Switched to GitHub instead of Google Code since they are going to close soon.

I will be updating this little app over the course of the next days and hopefully release it in better shape. A lot of people has filed issues with it and I plan to sort them out.

Better late than never some might say. I hope that is not too late for this app to get new light.

With this utility you can use the symlink application Microsoft Windows has well hidden inside the cmd.exe app.

The goal is just make it easier to create symbolic links, hard links, or directory junctions, using a pretty simple interface, so no more bogus command line to do it...

This application needs .Net Framework 3.5 to run (SP1 recommended) and as of 4/24/2015 this software will only work under

Windows XP doesn't have the mklink command available from the cmd.exe app.

If you encounter a bug, please let me know in the issues section, I will look into it when I have the time!

Thanks for your downloads and support, hope you like it!