dynStruct is a tool using dynamoRio to monitor memory accesses of an ELF binary via a data gatherer, and use this data to recover structures of the original code.

dynStruct can also be used to quickly find where and by which function a member of a structure is write or read.

To compile dynStruct for a 32bits target on a 64bits os execute build.sh 32

We are going to analyse this little program. 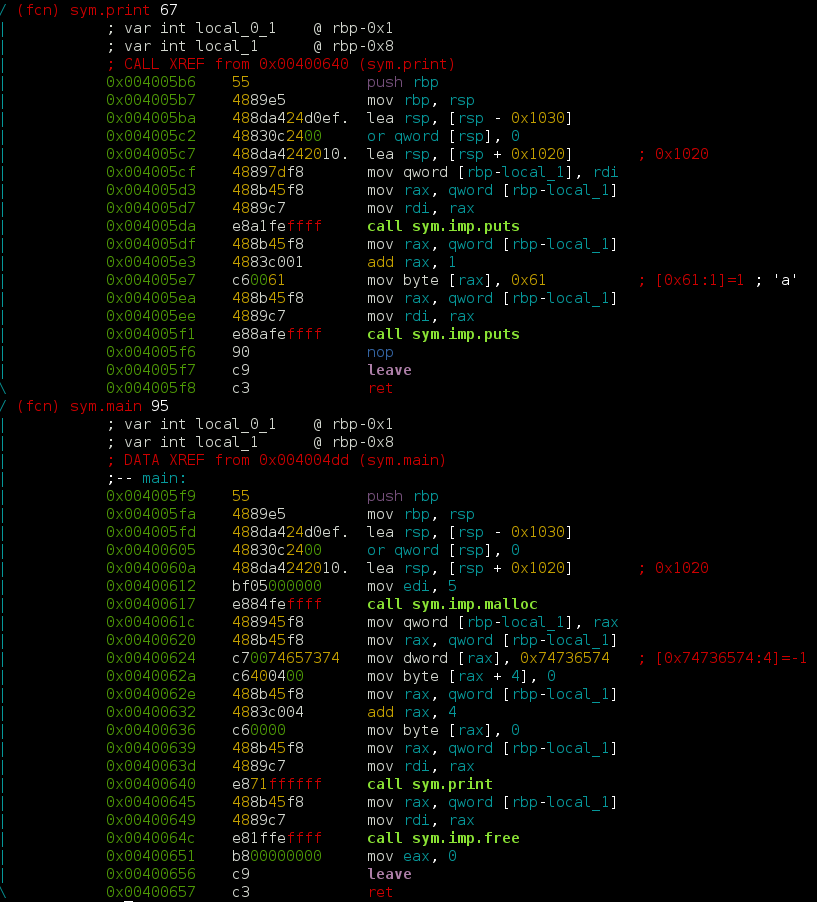 We see all the write accesses on str done by the program himself. We can notice the 4 bytes access at offset 0 of the block due to gcc optimisation for initializing the string.

Now if we run drrun -c dynStruct -m libc - -- tests/example we are going to monitor all the libc accesses, and we get

Now all the read accesses done by the libc are listed.

If you use the data gatherer on a multi-process program, a file per process will be written. This allow to analyse each process independently. In the case of an execution of an other program the new file will have the name of the program executed. If you don't want the data gatherer to follow new processes use the options -no_follow_children for drrun (example : drrun -no_follow_children -opt_cleancall 3 -c dynStruct -m libc.so - -- ls -l)

In order to reduce the memory overhead of the data gatherer, if there is an output file the data will be written in it every 100 block free.

The buffering has an issue on my setup when analyzing xterm, no problem with other program or other systems. The issue is a bit of the json output is missing. If you have this issue as well please fill an issue with detail of your setup and of the program analyzed. To fix it if needed comment the macro in includes/out_json.h and uncomment the first macro named DS_PRINTF.

The python script dynStruct.py do the structure recovery and can start the web_ui.

It's impossible to recover exactly the structures used in the original source code, so some choices had to be made. To recover the size of members dynStruct.py look at the size of the accesses for a particular offset, it keep the more used size, if 2 or more size are used the same number of time it keep the smaller size.

dynStruct also record the assembly instruction which does the access and a context instruction, the context instruction is the next one in the case of a read access and the previous one in the case of write access.
This context allow to recover type of structure members, the recovered type are pointer (when possible with commentaire for struct pointer and array pointer), function pointer, double, float, signed integer and unsigned integer. When a type is recovered it replace the type in the default type of the structure member.
This context analysis if not 100% reliable but is usually right.

The recovery of struct try to be the most compact as possible, the output will look like :

The recovery process can take a few minutes if there are large blocks.

The same output can be obtained via a serialized file:

The recovering of structure is actually not always 100% accurate but it can still give you a good idea of the internal structures of a program. Improving this will be the main goal in the following month.

For now the script dynStruct.py keep all loaded data from the json on memory in diverse objects. This mean for big json file (multiple hundred of Mo) the memory consumption of this script is very high and may even run out of memory, making the structure recovery process through dynStruct.py impossible. This is not a priority right now but in the future this issue will have a particular attention.

DynStruct has a web interface which display raw data from the gatherer and the structures recovered by dynStruct.py

This web interface can be start by using dynStruct.py with the -w option (and -l to change the listening ip/port of the interface).

If we took the last previous example we can start the web interface with:

When you go to the web interface you will see something like:

The navbar on top allow you to switch between the different data dynStruct can display.
Blocks and accesses are raw data from data gatherer (but more readable than console ouput of the gatherer and with search fields).
Structures contain structures recovered by dynStruct.py and the structures created by the user if any.
Download header allow you to download a C style header with the actuals structure (similar to ./dynStruct.py -e or ./dynStruct.py -c).

The detailed view of blocks display blocks informations, all accesses made in this block and a link to the corresponding structure if any. The context instruction is the previous instruction for a write access and the next one for a read access, this is used to in the structure recovery process. ![Block detailed view] (http://i.imgur.com/sB4PpjD.png)

There is also a detailed view for each member with the list of accesses made to this member on each block associated with the structure. ![member detailed view] (http://i.imgur.com/cGJN0ZC.png)

A member can be an inner structure, an array, an array of structure or a simple member (everything which don't match with the previous categories). Union and bitfield are not actually handle by dynStruct.

When you edit a structure you can remove it, remove a member (on the edit member view), or edit a member (it's name, type, size and number of units in the case of an array). You can also create new member in the place of any padding member.

On the Edit instance view you can select multiple blocks (by clicking on them) of the first list to remove them and multiple blocks on the second list to add them. When you click on Edit instances both selected suppression and addition will be executed.
On the second list only blocks with the same size than the structure and not already associated with the structure will be displayed. ![edit instance view] (http://i.imgur.com/an97OHp.png)

All edits are saved in the serialized file if any (work with files give with args -o and -p).