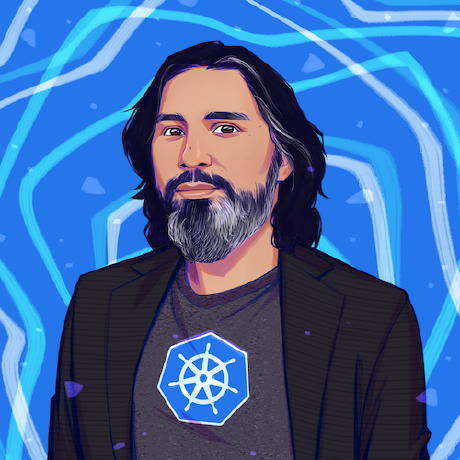 Book a meeting with me

I'm Alessandro, a software engineer living in Amsterdam, working at Microsoft and in my spare time as trainer for all things Cloud Native & Kubernetes. I organize the Dutch Kubernetes Meetup and Kubernetes Community Days Amsterdam.

Things I believe in:

Some of my work:

You can find my blog on Medium under the Cooking with Azure publication. My (almost) current CV is in here. I just started using Polywork my profile is at poly.work/ams0

Some videos of me will soon appear under /videos, and I hope to be able to post some cool techno set or track on my Soundcloud soon.

A little history of me:

I started working with computers at the early age of 8, with a Commodore64 around 1983, playing games and tinkering around with my brother on a Commodore64: I discovered Linux in 1999, installing Slackware 0.9 on the old PC's at the Chemistry department of the University of Ferrara (and joined the Ferrara Linux User Grup), and I never really stopped loving open source software.

I studied chemistry all my academic life, and I attended the Ph.D. program at the University of Amsterdam under Professor Fred Brouwer. I published a few scientific articles, here's a list. My research was mainly about synthetic organic synthesis of metal-organic compounds and their study with ultrafast femtosecond laser spectroscopy.

After my experience at the UvA, I switched careers and moved thru a number of organizations until I scored my dream job at Red Hat (for an open source software lover, there was nothing better!). I eventually left and stared my own company, Lovelace Engineering (in memory of Ada Lovelace), and after a while joined Microsoft as Technical Evangelist and now as a Principal Software Engineer in the Commercial Software Engineering organization.

How to reach me:

844 contributions in the last year