The Sinclair ZX81 was my first computer, in 1982. It is one of those home computers very popular in the '80s and affordable (£49.95 in kit). Other very popular computers were the Commodore 64 and the Apple II but were far more expensive. The successor of the ZX81 was the ZX Spectrum. 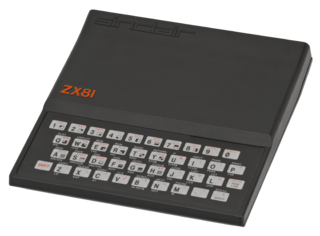 The characters set was not based on ASCII but was custom and includes only capital letters. It includes also some graphic characters:

I wanted to learn Typescript and thus, I was looking for a project not too small (not just an example), but also not too big. I find also interresting to explore the question of how to transform a Java applet into a pure HTML5/Javascript program.

I find a HTML5/Javascript ZX81 emulator made by Simon Holdsworth, but I found only a minification version, so it was not usable. However, on the same page, there is also a Java version. So I took this Java application as a starting point.

These are my objectives for this project:

Currently, all the objectives are fullfiled except those:

I found one of my first applications: a game I build in 1985. Texts were in French and I have translated them in English.

It is written with a mix of BASIC (to display the menu, the rules of the game, etc) and Z80 assembly code (for the game itself).

Want to try the game and the emulator? It is available at the following address: www.andrivet.com/static/ZX81/: Use q and a keys to move the left character, p and l to move the right one, and j to abandon. In the menu, if you choose item 5, you will exit the game and play with the ZX81 emulator. The original manual Sinclair ZX81 BASIC Programming is available.

Note: A full list of components used by the emulator can be found in NOTICE.md.

This emulator is based on these software: