Welcome to the Mozilla and Eclipse Defect Tracking Dataset: a dataset with over 200.000 reported bugs extracted from the Eclipse and Mozilla projects (respectively 47.000 and 168.000 reported bugs). Besides providing a single snapshot of a bug report, we also include all the incremental modifications as performed during the lifetime of the bug report. Below, you can find additional information about the dataset.

With each report in the dataset, a list of modifications provides the full update history.

Structure of the Dataset 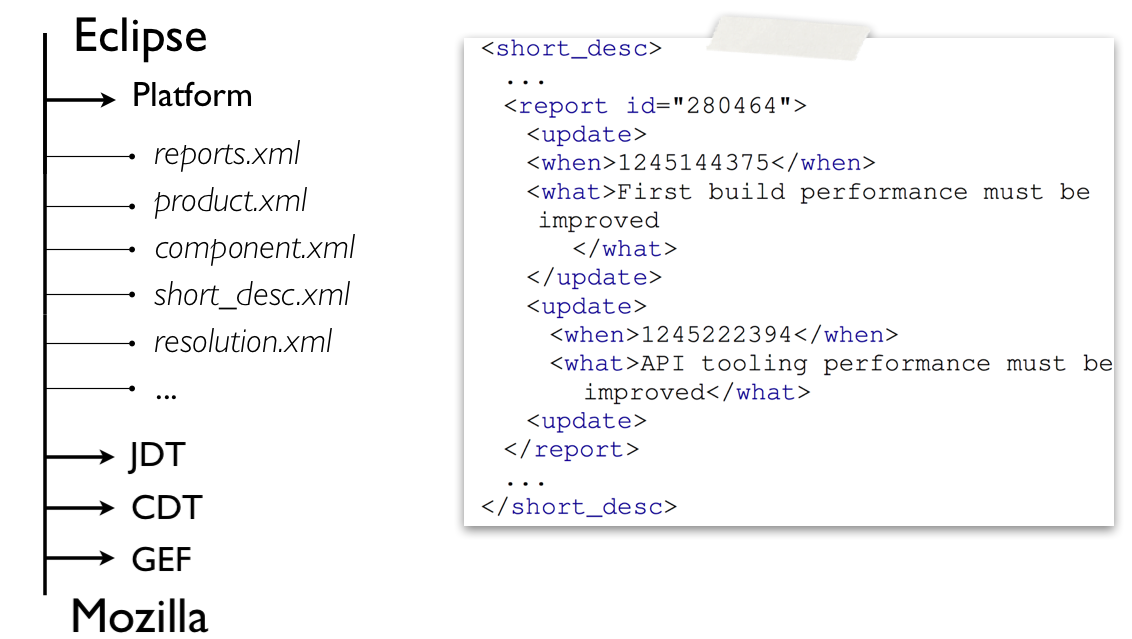 As we see above, the Eclipse and Mozilla Defect Tracking Dataset is bundled as a set of XML files. Both Eclipse and Mozilla have a separate directory consisting of the products we previously selected. Each product directory contains for each bug attribute an XML file containing the corresponding information. We distinguish reports.xml from the other XMl files: reports.xml contains the attributes that remain unchanged after reporting while the other XML files provide all the updates occurred for the particular attribute. We also show an example of the updates that occurred for the short_desc bug attribute.

We demonstrate the usage of the dataset using the following examples:

We need you to make the dataset more useful for researchers. If you have any questions and/or suggestions to improve the dataset, don't hesitate to contact us or submit an Issue on this page. In our case, we are particularly interested in the following things:

Please refer to our work when this dataset was relevant to your paper.