Run an isolated instance of a tor network in Docker containers

This will create 3 directory authorities (DA's), 1 client listning on port 9050, 5 relays, and 3 exits. You can scale to whatever you want.

If you're going "Why do I want this?" here's a few examples:

tor research: learn how tor interacts with nodes, make modifications to settings and see what happens, understand how the Tor Network operates without affecting real people. Originally this project was part of a class I wrote to teach about how tor works.

tor development: in the case you're working on a patch that is more complex and requires seeing what happens on the tor network, you can apply the patches to the containers.

traffic analysis: Test out the latest tor exploit and pretend to be a nation state adversary.

If this needs to be said, this should never be used as a replacement for tor. This is for research purposes alone.

All of the required information that other nodes need to know about on the network are stored in a named volume torvol which you can find the path for doing docker volume inspect privatetornetwork_torvol or use docker volume ls to find its name on your system.

If you are running multiple instances or are rebuilding it, make sure you delete this named volume or you'll accidentally use a previous iteration's keys. Easiest way is:

You can manually build a tor network if you don't want to use docker-compose but you'll need to make sure you pass the correct DA fingerprints to each of the servers. Also make sure you create a user defined interface so that it doesn't try to use the default bridge. For example, this would make the first directory authority (DA) docker run -e ROLE=DA --network tornet antitree/private-tor

If you'd like to try a very specific version you can rebuild the Dockerfile and edit the "TOR_VER" environment variable. These values should match the branch names from the official tor repo.

If you'd like to run an onion service, you can use the TOR_HS_PORT and TOR_HS_ADDRESS environment variables. By default, there is a hidden service setup in the docker-compose.yml file.

Example configuration that will run an onion service named "hs" and a web server named "web". This will link the web service to the onion service so that "hs" will forward connections to "web" on port 80. This is done using the links configuration feature for docker-compose.

NOTE: By default, this just displays the nginx start page so you may want to replace the image with a more interesting one or configure the nginx container with some static HTML to host.

This configuration is based on the Tor documentation for how to run a private tor network. You should also check out Chutney which does something similar with separate processes instead of containers. If you need to make a modification (such as changing the timing of the DA's) edit the config/torrc and/or config/torrc.da files. You may need to modify the Dockerfile as well.

The container is built off of chriswayg/tor-server but has been heavily modified to support some other env variables that you can pass to it:

The /util/ directory contains a few scripts to play with one the host computer. Once you have a private tor network up and running you can try out some of the tools in there.

With the tor control port exposed to the host, you can use arm to monitor the client. 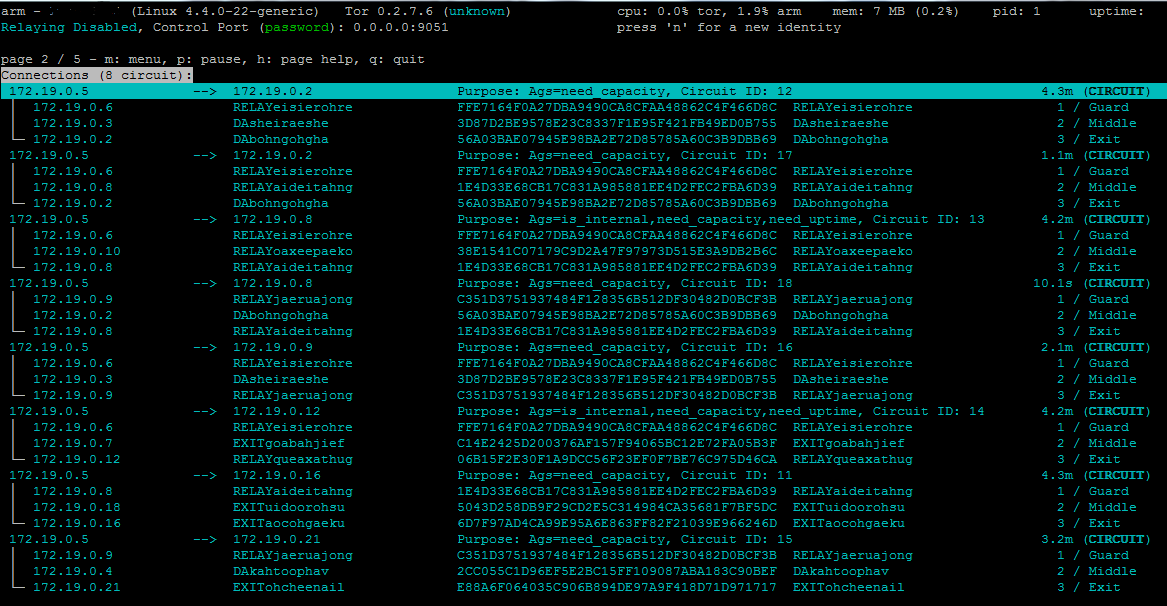 You can also connect arm to one of the containers if you know it's ip. You can find the IPs by running the get_consensus.py script provided or however otherway you feel like.

This will connect to the CLIENT docker container via the tor Control Port and download the consensus which contains the nicknames and IPs of the relays on the network. (If this is blank, you may have to wait 30s while they decided on a consensus.)

If you've installed arm you will probably also have the tor-prompt command. You can use it to manually gather information about some of the containers that have their Control Port exposed like so:

Here are a few things to try if you're runing into issues:

This project is in no way associated with the Tor Project or their developers. Like many people I'm a fan of Tor and recommend considering ways you can help the project. Consider running a relay, donating, or writing code.

Run an isolated instance of a tor network in Docker containers