These are the release notes for appleseed 2.1.0-beta.

This release of appleseed has a DOI: https://zenodo.org/record/3456967

This release is the result of more than ten months of work by the incredibly talented and dedicated appleseed development team.

Many thanks to our code contributors for this release, in alphabetical order:

Many thanks as well to our internal testers, feature specialists and artists, in particular:

appleseed now has native support for Cryptomatte via a pair of new Cryptomatte AOVs. Cryptomatte is a system to generate ID maps that work even in the presence of transparency, depth of field and motion blur. 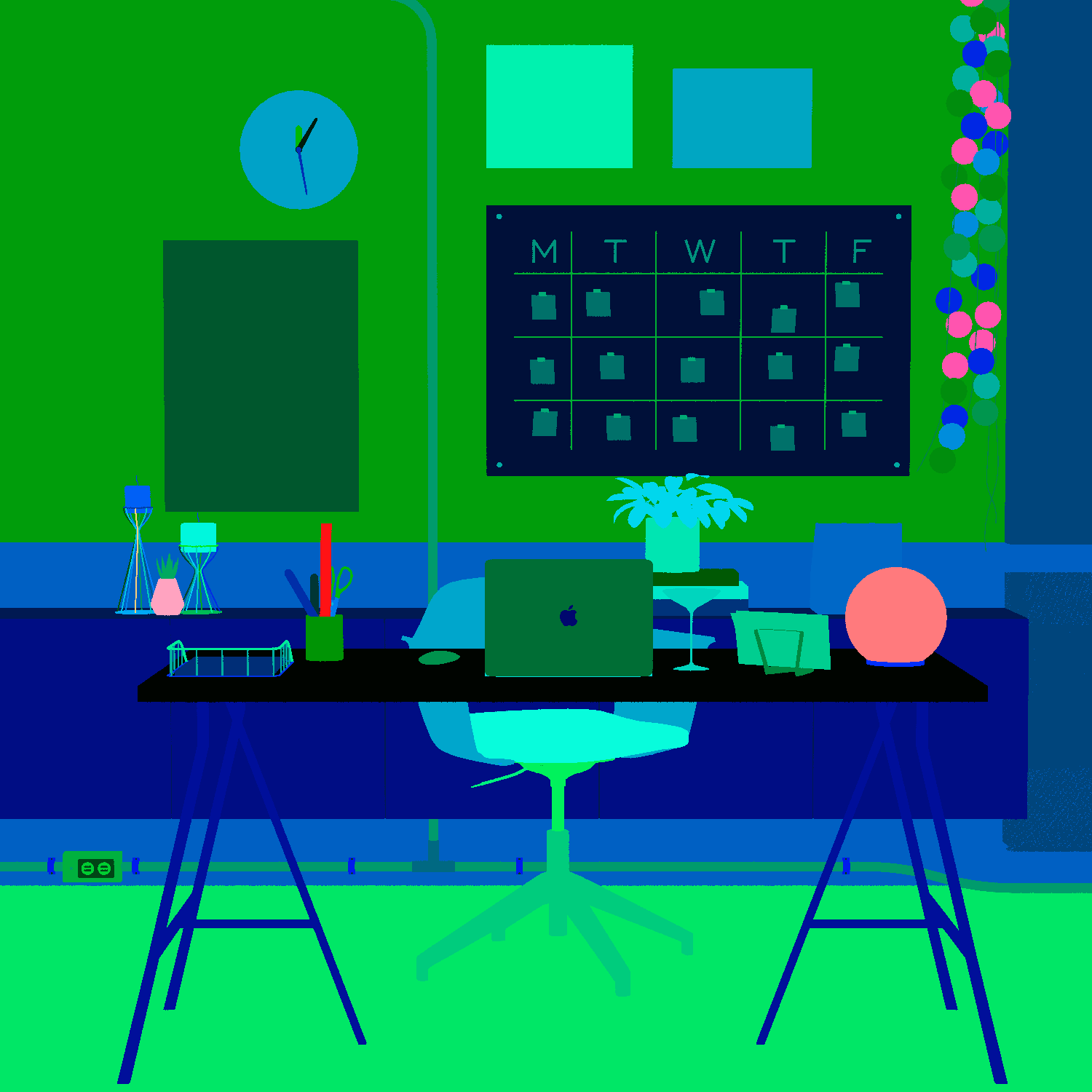 We've added render checkpointing, a mechanism to resume multi-pass renders after they were interrupted (voluntarily or not), and to add rendering passes to a finished render.

At the moment render checkpointing is only exposed in appleseed.cli. Eventually it should become available in appleseed.studio as well.

Here's an example workflow: when starting your multi-pass render (notice the --passes option), you add the --checkpoint-create option to create/update the checkpoint file after each render pass:

After you've interrupted the render with CTRL+C, or, Heaven forbid, after appleseed crashed, you can simply resume the render from the last complete render pass by adding the --checkpoint-resume option:

You can also pass both --checkpoint-create and --checkpoint-resume at the same time to simultaneously resume rendering from a checkpoint and continuing updating it as new passes are rendered:

Finally, you can pass both options even if no checkpoint exists yet, in which case rendering will simply start from the first pass:

appleseed now has the ability to compile OSL source shaders on the fly. We currently exposed this feature in our Blender plugin. In the following screenshot, the user has written a small OSL shader that remaps its input to a color using a custom color map, then has connected it to the V texture coordinate of the object: 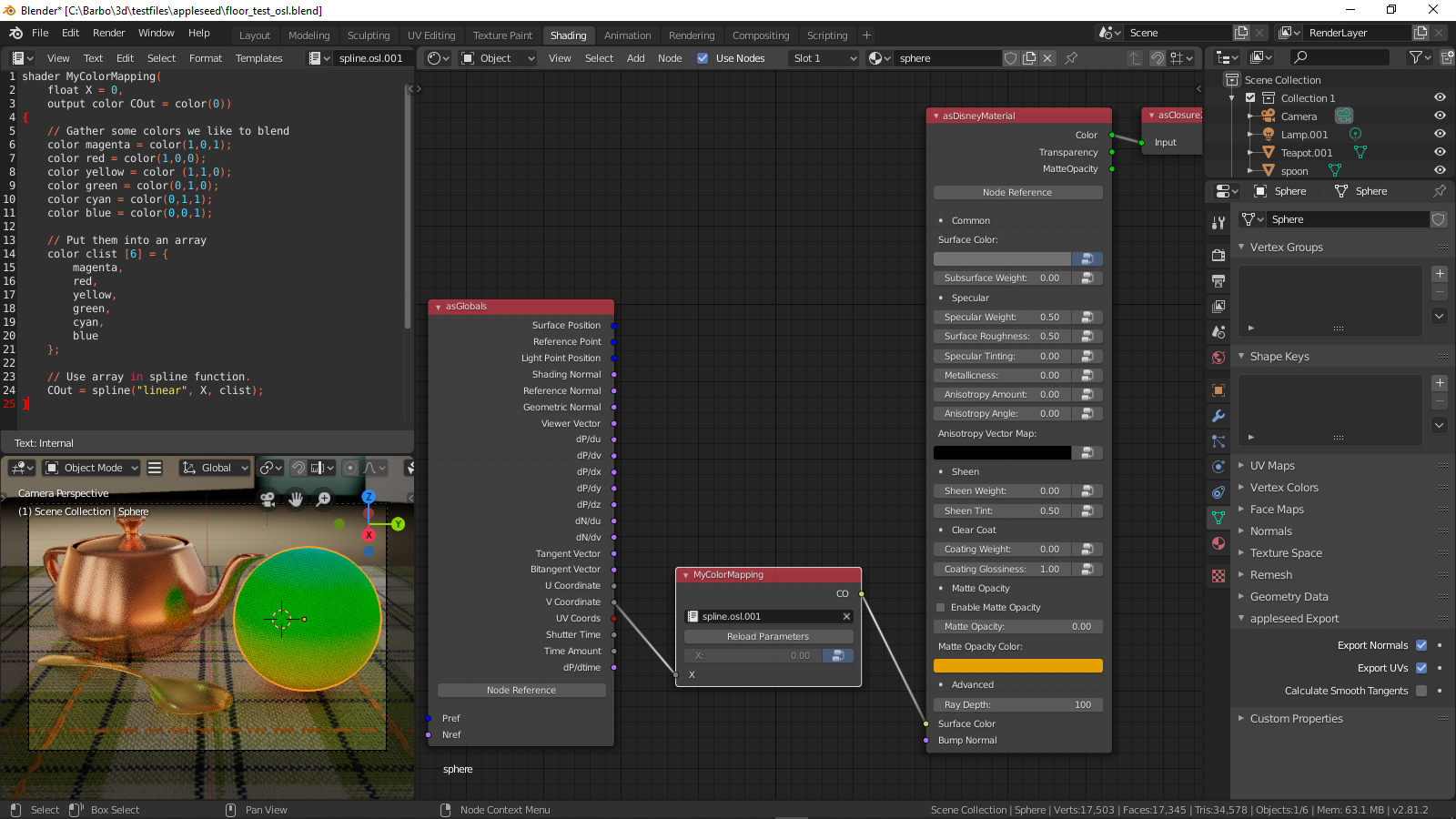 Future versions of the 3ds Max and Maya plugins will expose this feature in a similar manner.

Here is a render of the Japanese Classroom scene with the fisheye lens using a 120° horizontal field of view and a stereographic projection: 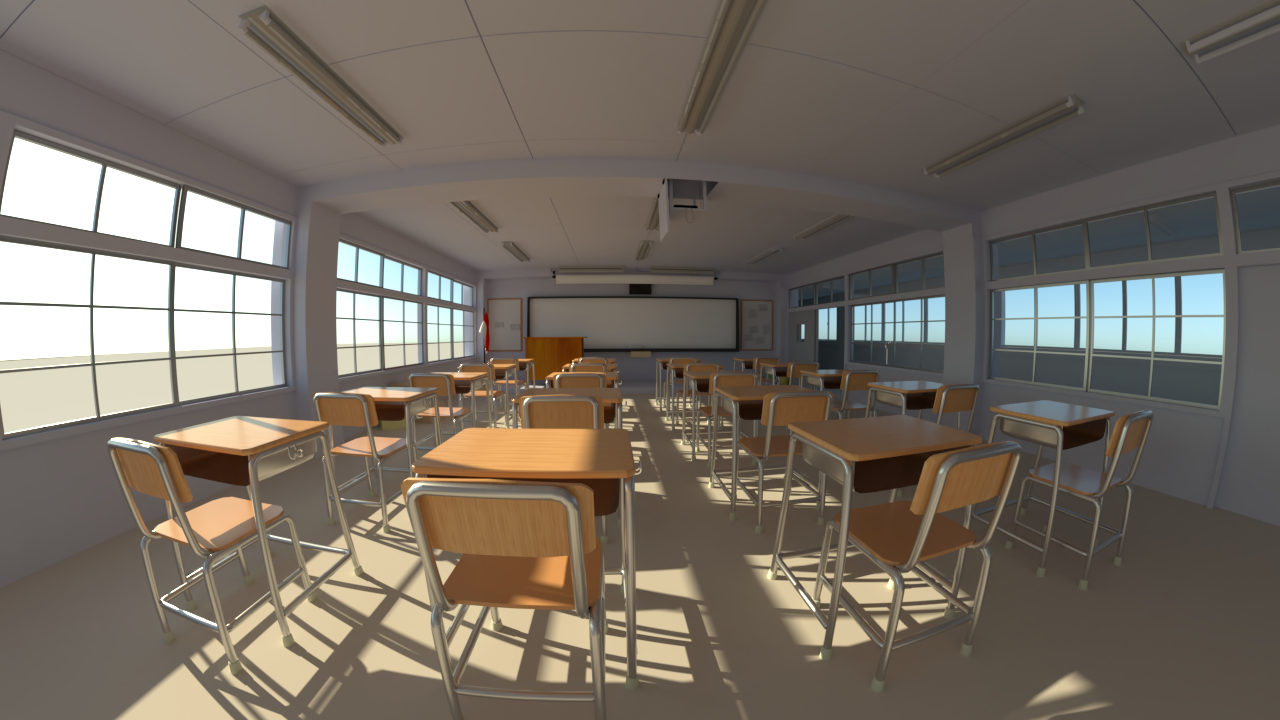 (Japanese Classroom scene by Blend Swap user NovaZeeke, converted to Mitsuba format by Benedikt Bitterli, then to appleseed format via the mitsuba2appleseed.py script that ships with appleseed.)

We've added a way to control how many samples each pixel will receive based on a user-provided black-and-white mask. This allows to get rid of sampling noise in specific parts of a render without adding samples in areas that are already smooth. This is yet another tool in the toolbox, complementing the new adaptive tile sampler introduced in appleseed 2.0.0-beta and the per-object shading quality control that has been present in appleseed since its early days.

In the following mosaic, the top-left image (1) is the base render using 128 samples for each pixel; the top-right image (2) is a user-painted mask where black corresponds to 128 samples/pixel, white corresponds to 2048 samples/pixel and gray levels correspond to intermediate values; the bottom-left image (3) is the render produced with the new texture-controlled pixel renderer using the mask; the bottom-right image (4) is the Pixel Time AOV where the color of each pixel reflects the relative amount of time spent rendering it (the brighter the pixel, the longer it took to render it): 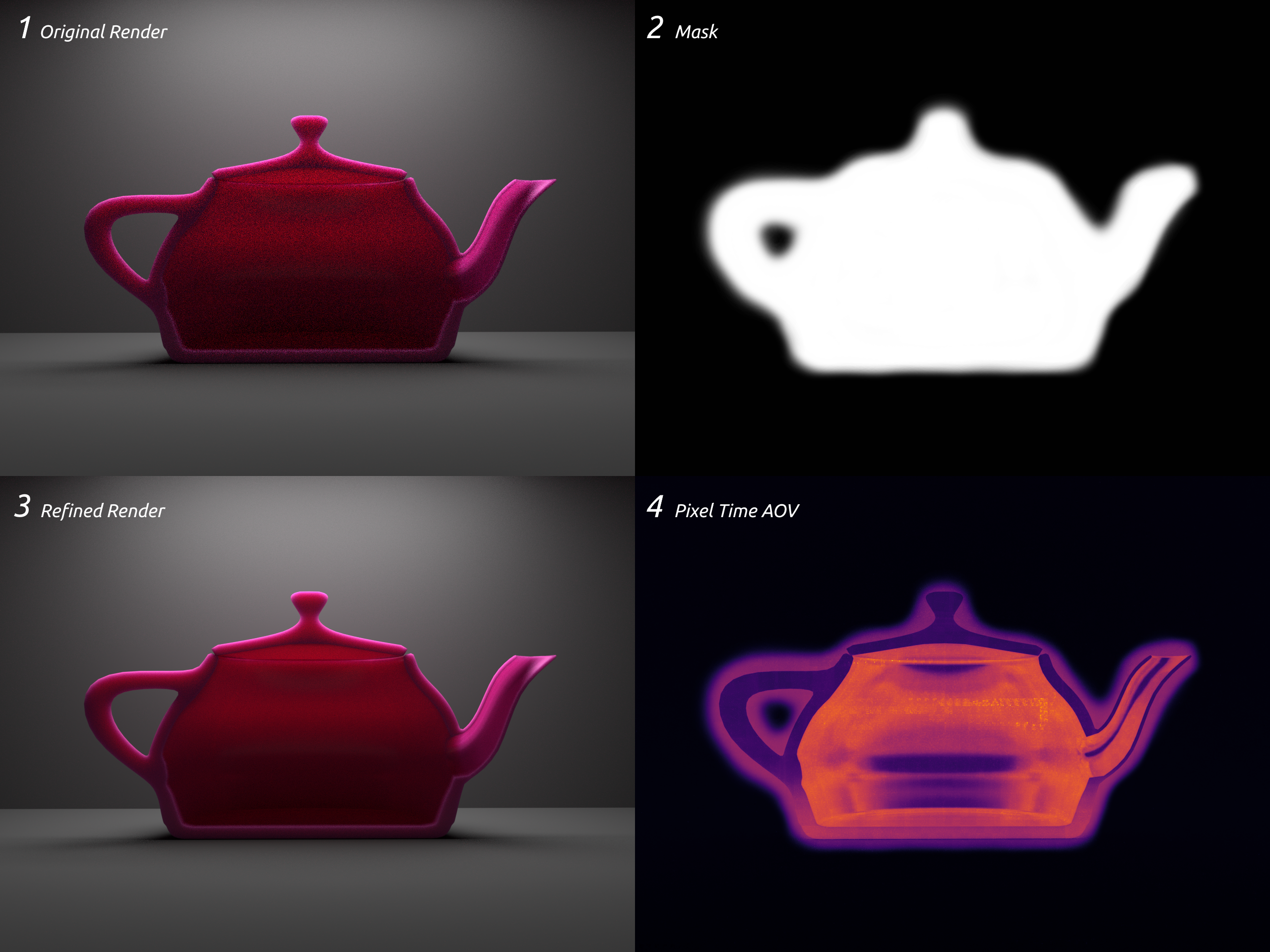 We switched appleseed to use Filter Importance Sampling instead of filtered sample splatting. This new technique has three advantages over the previous one: lower noise for a given number of samples per pixel, less waste (tile borders are no longer required), and statistically independent pixels, meaning in practice that modern denoisers should work a lot better when applied to images produced by appleseed. 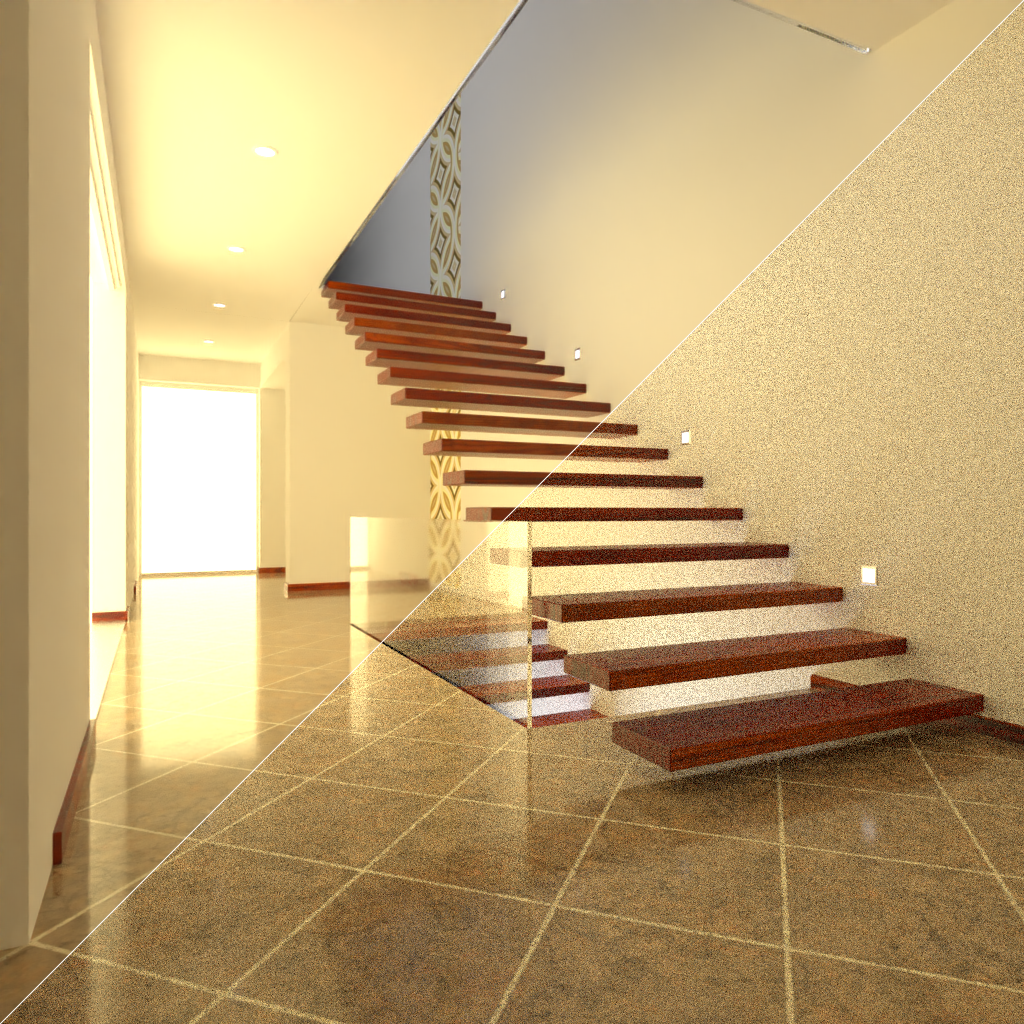 (Modern Hall scene by Blend Swap user NewSee2l035, converted to Mitsuba format by Benedikt Bitterli, then to appleseed format via the mitsuba2appleseed.py script that ships with appleseed.)