Project management directly from the TODOs in your codebase

Toodles scrapes your entire repository for TODO entries and organizes them so you can manage your project directly from the code. View, filter, sort, and edit your TODO's with an easy to use web application. When you make changes via toodles, the edits will be applied directly the TODO entries in your code. When you're done, commit and push your changes to share them with your team! 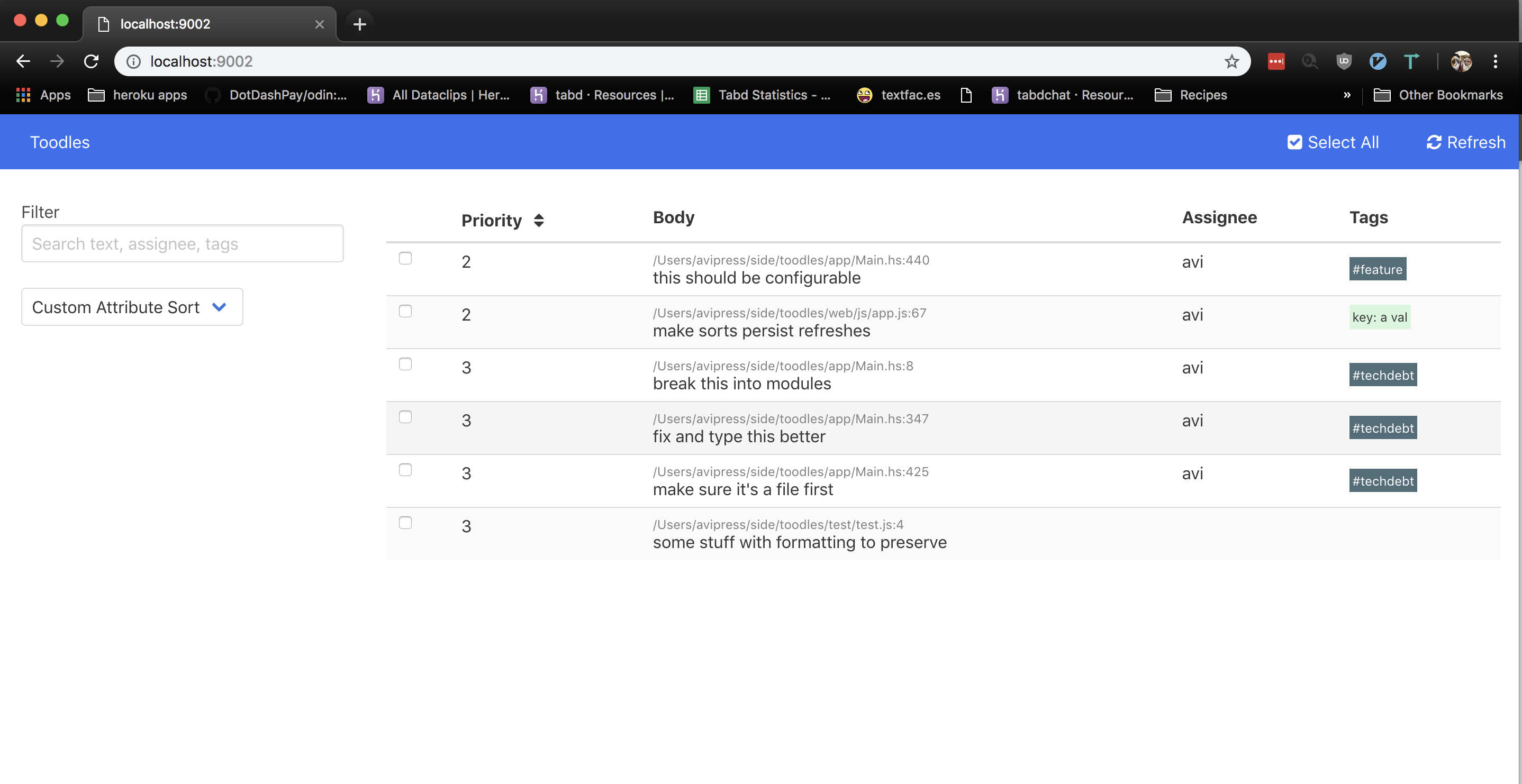 Specify details about your TODO's so that you can filter and sort them with ease! Specify details within parenthesis and separate with the | delimeter.

The key p=<integer> will be interpreted as a priority number

Use arbitrary key value pairs <key>=<value>|<key2>=<value2>|... and design any organization scheme you wish! A good use for this is to enter dates of deadlines for TODO's that you can sort on in Toodles

A detail starting with #, eg #bug|#techdebt|#database|... will be interpreted as a tag, which can be used to label and group your TODO's.

Assign your TODO's to someone. Any plain word that will be interpreted as an assignee.

You can configure toodles by putting a .toodles.yaml file in the root of your project. See this repo's .toodles.yaml for the full configuration spec.

Currently via config you can:

Ignore as many files as you can! Large autogenerated files will slow Toodles down quite a bit. Check the output of the server to see any files/folders that may be causing slowness for your repo and add them to the ignore section your .toodles.yaml If the performance of Toodles is not good enough for your use case, please open an issue.

These languages will be scanned for any TODO's:

Submit a PR if you'd like a language to be added. There will eventually be support for this to be user configurable

Scarf is the easiest way to get Toodles.

You can run a pre-built toodles for your current directory via docker:

For convenience this repository also provides a Dockerfile to automatically build toodles.

Invoking toodles with no arguments will treat the current directory as the project root and will start a server on port 9001. You can set these with the -d and -p flags, respectively.

If Toodles is useful to you or your organization, please consider supporting the project by purchasing Toodles on Scarf.

Contributions in any form are welcome! A few bits of info:

Project management directly from the TODOs in your codebase