lightweight hypervisor SDK written in C++ with support for Windows, Linux and UEFI

To support Bareflank's design approach, the hypervisor is licensed under MIT, specifically enabling users of the project to both contribute back to the project, but also create proprietary versions of the hypervisor if so desired.

In addition, the project comes complete with a set of unit tests to validate that the provided SDK works as expected. Furthermore, Travis CI has been set up to test source code formatting via Astyle, and static / dynamic analysis via Clang Tidy, Codacy, and Google's Sanitizers. Finally, we adhere to the CII Best Practices, the High Integrity C++ Guidelines and the C++ Core Guidelines including support for the Guideline Support Library.

Currently, we have support for the following 64bit host operating systems on Intel Sandy Bridge and above hardware:

In the future, we would also like to support:

Most people think that hypervisors are meant to virtualize servers and provide a means to run Windows on a Mac, but there is a whole field of research where hypervisors are used without guest virtual machines. Since a hypervisor is capable of controlling the host OS running underneath it (so-called "ring -1"), host-only hypervisors support introspection, reverse engineering, anti-virus, containerization, diversity, and even architectural research like MoRE. All of these use cases start the same way, by spending months standing up the hypervisor itself before you can start working on your actual project. Existing open source hypervisors are burdened with legacy support and unnecessary complexity that make them painful to work with when conducting hypervisor research.

Check out the latest demo for how to compile and use the Bareflank Hypervisor on Ubuntu 18.04: 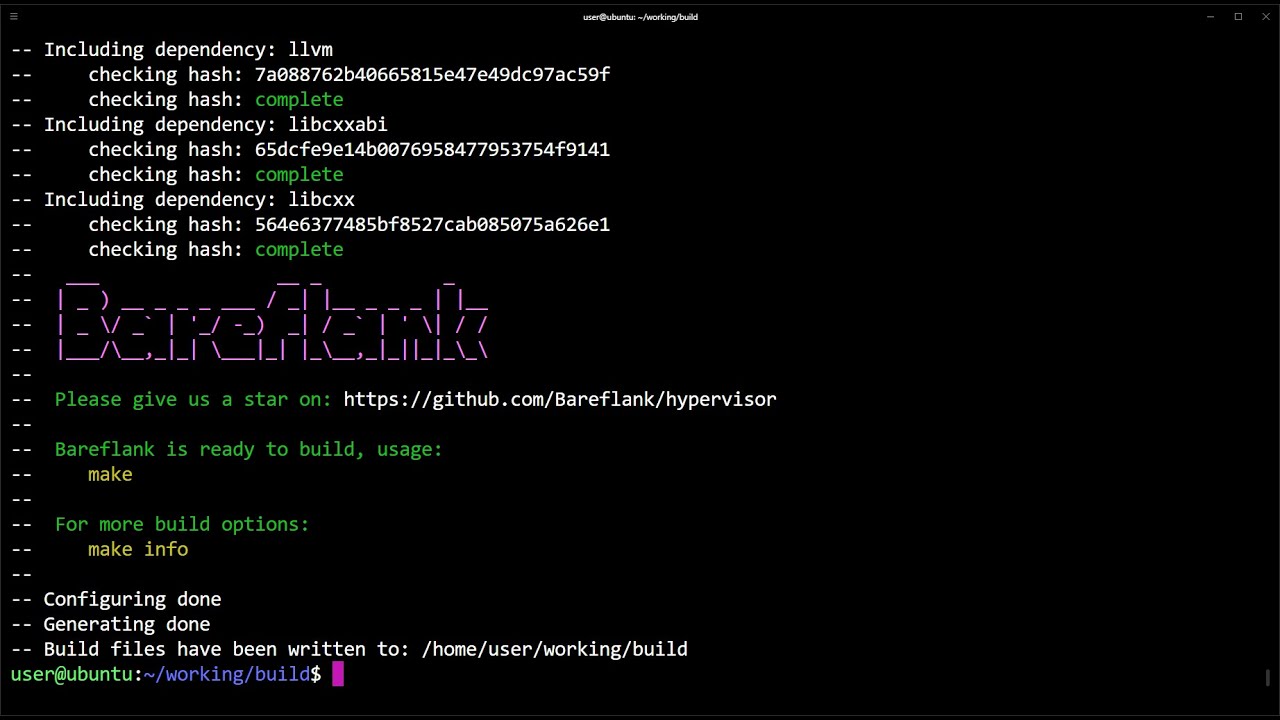 Checkout our YouTube Channel for more great content as well as the following videos at CppCon below:

Check out our Can You Hack It?® challenge and test your skills! Submit your score to show us what you’ve got. We have offices across the country and offer competitive pay and outstanding benefits. Join a team that is not only committed to the future of cyberspace, but to our employee’s success as well.

Although Bareflank can be made to run on most systems, the following are the supported platforms and their dependencies:

After installing the above packages, you must enable test signing mode. This can be done from a command prompt with admin privileges:

To install Cygwin, simply install using all default settings, and then copy setup-x86_64.exe to C:\cygwin64\bin. From there, open a Cygwin terminal and run the following:

This build environment provides a complete toolchain for building and running Bareflank. Most developers using Bareflank on Windows will need Cygwin for this reason. The remaining compilation instructions follow below.

To compile with default settings for your host environment, run the following commands:

To use the hypervisor, run the following commands:

to get status information, use the following:

As stated above, the Bareflank Hypervisor is an SDK to create your own, more complicated hypervisors. One example of an extension is the boxy hypervisor, which provides support for Linux based guest virtual machines. There are several other examples in our examples folder.

To use one of these examples, you must tell the build system which Virtual Machine Monitor (VMM) you wish to use. By default, the build system will use "bfvmm", but you can override this by defining DEFAULT_VMM variable when running cmake. Each example has its own VMM target. For example, the CPUID count example's VMM is "example_cpuidcount_vmm" which can be seen in the following CMakeLists.txt file. So for example, to compile Bareflank and test out the CPUID count example, you would configure Bareflank using the following:

In addition to setting the DEFAULT_VMM, if you are using the example_config.cmake config file you would set the OVERRIDE_VMM variable which will set the DEFAULT_VMM for you.

A UEFI application version of Bareflank may be compiled on Linux and used to boot both Linux and Windows The following describes how to build and execute Bareflank with EFI. For additional information, please see the following YouTube video

To compile for UEFI, add the following to CMake when configuring:

It should be noted that unit tests must be disabled, and static builds are currently required (the example config provides an example of how to configure Bareflank as needed for more complex builds).

To boot Windows or Linux you will need to provide your own extension that enables EPT. To see an example of this type of extension, please see the following integration test:

Our front page video on YouTube explains how to use this config, and the instructions are also in the config itself. To enable EFI, turn on the EFI flag. You will also need to set the following:

If for example, you are using the integration test listed above, these setting would be as follows:

The resulting UEFI application can be found here:

Place this binary in your EFI partition (e.g., on Ubuntu this is /boot/efi/EFI/BOOT/bareflank.efi) and execute it like any other EFI application. Once Bareflank is running, you can start Windows or Linux if you included the above. Also note that utilities like "make dump" do not work when using EFI as the driver doesn't have access to the debug ring. You can, however, use "make ack" to get the hypervisor to say "hi".

On Windows, serial output might not work, and on some systems (e.g. Intel NUC), the default Windows serial device may prevent Bareflank from starting at all. If this is the case, disable the default serial device using the following:

You might find it useful to setup SSH if you are using Cygwin. The instructions for setting up SSH on Cygwin are as follows:

The Bareflank Hypervisor is licensed under the MIT License.

lightweight hypervisor SDK written in C++ with support for Windows, Linux and UEFI