A plug-in for the JS map library Leaflet, allowing to define patterns (like dashes, arrows, icons, etc.) on Polylines.

A Leaflet plug-in to define and draw patterns on existing Polylines or along coordinate paths. Demo.

The current version of the plugin (on the master branch) works only with versions 1.* of Leaflet.

For a version of the plugin compatible with the older 0.7.* Leaflet releases, use the leaflet-0.7.2 branch. But this branch is not maintained anymore and Leaflet 1.* has been around for a while, so you should definitely update. 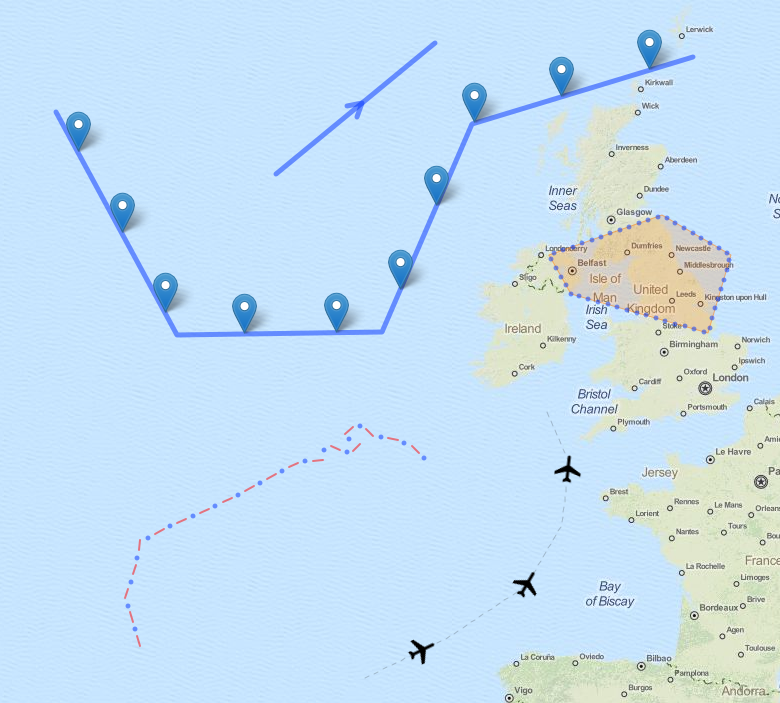 To create a decorator and add it to the map: L.polylineDecorator(latlngs, options).addTo(map);

offset, endOffset and repeat can be each defined as a number, in pixels, or in percentage of the line's length, as a string (ex: '10%').

This plugin creates actual L.Layer objects (markers, polyline, etc.) to draw the pattern symbols. This is extra customizable as you can define your own symbols, but it may have an impact on the responsiveness of your map if you have to draw a lot of symbols on many large polylines.

A plug-in for the JS map library Leaflet, allowing to define patterns (like dashes, arrows, icons, etc.) on Polylines.