Put your web app in the iOS App Store and update it whenever you want.

Put your web app in the iOS App Store and update it whenever you want. Access native features like the contacts list and camera using PhoneGap APIs. Bridge the uncanny valley of hybrid apps with launch images and preloaded static assets.

This system has been in the iOS app store for a year with zero crash reports, successfully serving thousands of background updates. That said, it's still fairly new, so buyer beware. The important logic is tested, but there is plenty left to manually verify. 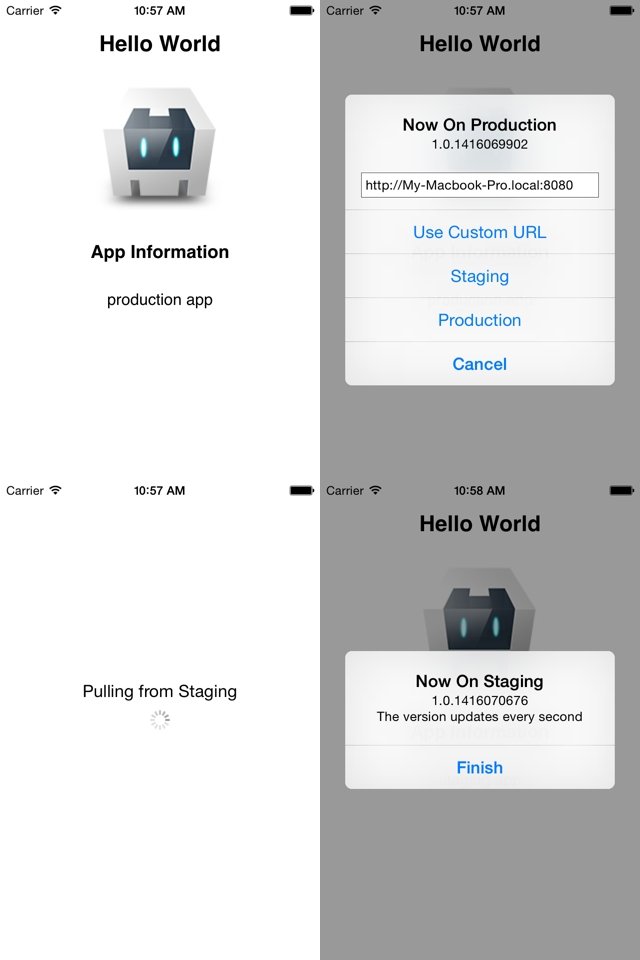 Included is a working Xcode project and sample node.js server.

On The Command Line

You can also run the demo with phonegap run ios.

The Xcode project that is included is not just a demo, it's the starting point for your application. It's a working app that is currently downloading a demo application from this heroku app. That means once you've created an app manifest and changed the endpoint URLs to point to it, the demo will become your app. Pretty crazy, huh? You'll have to do some extra work to get your app accepted, such as coming up with app icons and launch images, but with those two steps alone you will have a working app to show off on your device.

Your server must host a manifest.json that lists the files your application needs to function. You can use the Stratosphere module to simplify this. Take a look at ota-server/server.js for a small example.

A object containing multiple objects, each with the following structure:

The keys of the files object are for your own reference; the update system does not use them. destination refers to where in the www folder this file should be placed. source should be a path relative to your web server's root indicating where the file should be downloaded from. The checksum is an md5 hash of the file data (computed with crypto.createHash('md5').update(buffer).digest('hex')).

Every file that your app needs to function should be declared here.

A description of this particular version of the app. I recommend using the last commit message, or perhaps a human readable date indicating when the app was built. This is only visible in the dev tools, and helps you keep track of what version you're on.

The version number of the app, such as 1.0.0. Clients will update themselves if this increases.

See ota-server/server.js for an example.

Edit classes/Constants.m to suit your application. Three endpoint URLs can be configured. ProductionURL is the default endpoint, while StagingURL is provided as a shortcut in the dev tools. CustomURL is a placeholder for the editable text field in the dev tools.

Consult the iOS Documentation for the full list of icon and launch image sizes.

Implement function shouldAllowOTADevTools() as a global function in your application. This synchronous function should return a boolean indicating whether or not the dev tools should be opened.

There are many other preferences you can set -- too numerous to list in this guide, and outside the scope of this project anyway. The most important one is probably the Product Name, which is the name of the app as seen on the home screen.

If you want to deploy the application on your iOS device, run phonegap run ios with your device plugged in and ios-deploy installed as a global module.

Yes, Apple has changed its long-standing policy against this practice and now allows over-the-air updates of hybrid apps so long as the purpose of the app does not change. I have successfully gotten two apps using this technology accepted on the first try, explicitly stating in my app review notes that over-the-air updates are performed.

When Does The App Update?

There are four ways that an update can happen

If an update finishes downloading while the app is in the foreground, it will only be applied when the user reopens the app.

Just because an update is attempted does not mean that files are actually downloaded. Files are downloaded if at least one of the following is true:

Endpoints that are not production always result in an update because they are usually pointed at development machines, where incrementing the version number so often is tedious and unnecessary.

Only files that have changed will be downloaded, and the update will be aborted if any of the checksums do not match.

How Does This Work?

iOS apps do not have permission to write to the app bundle, so PhoneGap Air writes those resources to the Documents directory and does its work there instead.

Let me know how to reproduce it and I'll fix it.

Let me know what's confusing and I'll add to it.

I'm a full-time student with a full-time job, so these will be a very low priority for me. If you need something badly @mention me on twitter or email me at me [at] benng.me and we'll work something out.

Put your web app in the iOS App Store and update it whenever you want.