This functionality provides OSD joystick emulation for HS1177-style cameras, e.g. cameras having a single OSD input pin driven by a button resistor divider. Most cameras up to date seem to adhere to the design and have the following resistor nominals:

Assumes that the camera (or FC) has sufficient capacitance at OSD pin (look at Tips for hardware designers section). If you camera is not working, try adding a capacitor between camera OSD and GND.

How do I select a suitable PIN?

Requires a 150-600 Ω resistor and a 1-10 µF capacitor, forming an RC-filter. Resistor goes from PIN to OSD, while the capacitor should be connected between OSD and GND. @todo draw a schematic

Requires no additional components, wire your PIN to OSD, preferably with a GND connection as well. 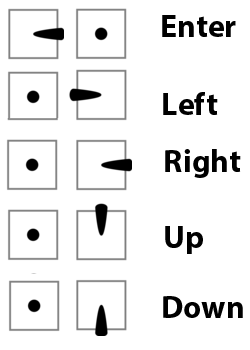 Some cameras have a secondary OSD menu (for example the RunCam Eagle Pro 2) that allows setting things like voltage monitor, timers, display name, etc. This menu can be accessed as well, but you'll need to determine the appropriate stick commands based on the manual provided with the camera. The stick position will be equivalent to whatever button sequence the camera requires. So for example if the camera requires holding "down" button to enter the menu, this would correspond to holding the pitch stick "down" while entering camera control with the normal left stick throttle centered and yaw right. The point is that the roll/pitch stick corresponds to the up/down/left/right buttons and the throttle centered/yaw right corresponds to the "enter" button on the camera's control keypad or joystick.

First of all, make sure resource list CLI command lists camera_control as allocated.

If your camera doesn't work, chances are you have to adjust values for key delay, reference voltage or internal resistance. Defaults work fine for most HS1177-derivatives, if you have issues, try changing the key delay value first.

If you have multi-click occurrences, decrease the delay by 10-15%, if your clicks don't register consistently - try increasing it instead. Foxeer Arrow v3 is known to work best with delay of 125 ms.

Just measure the voltage between OSD and GND pins on the camera while it is powered.

To derive this value for an unknown camera, you'll need a multimeter and a suitable joystick. First set your multimeter to resistance measurement mode and measure the resistance of your OSD joystick while pressing individuals keys, write the values down somewhere, you'll need them later.

Now you'll have to power your camera, connect the OSD joystick to it and find a way to measure the OSD-pin voltage while pressing individual keys on joystick, measuring voltages for all keys is not necessary, one or two is sufficient. Also measure the Reference Voltage if you haven't yet.

You'll end up with a set of resistance and voltage values for each key. To find internal resistance value, plug in your values into this formula: Rin = Rkey * (Vref / Vkey - 1) where key in (enter, left, up, right, down)

Calculate this value for a few keys as a sanity check, the resulting values should be roughly the same. The Rin you've arrived at is your camera_control_internal_resistance value, keep in mind it is measured in 100 Ω steps, hence divide your value by 100.

Most cameras use standard resistance values for the keypad buttons, but some can have unusual values. If you have a problem with most of the buttons working but one or two not, try measuring and adjusting the camera_control_button_resistance values (added in Betaflight 4.1).

These cameras have insufficient to no capacitance on OSD pin, as a result you'll have to add at least 0.1 µF to get Hardware PWM working. Foxeer may release a new revision which will address this problem.

1206 capacitors work perfectly while soldering directly to JST connector backside, here's an illustration of a 100 nF 1206 capacitor soldered onto an Arrow Micro v2, but it also works for Arrow Mini as they share PCB design: 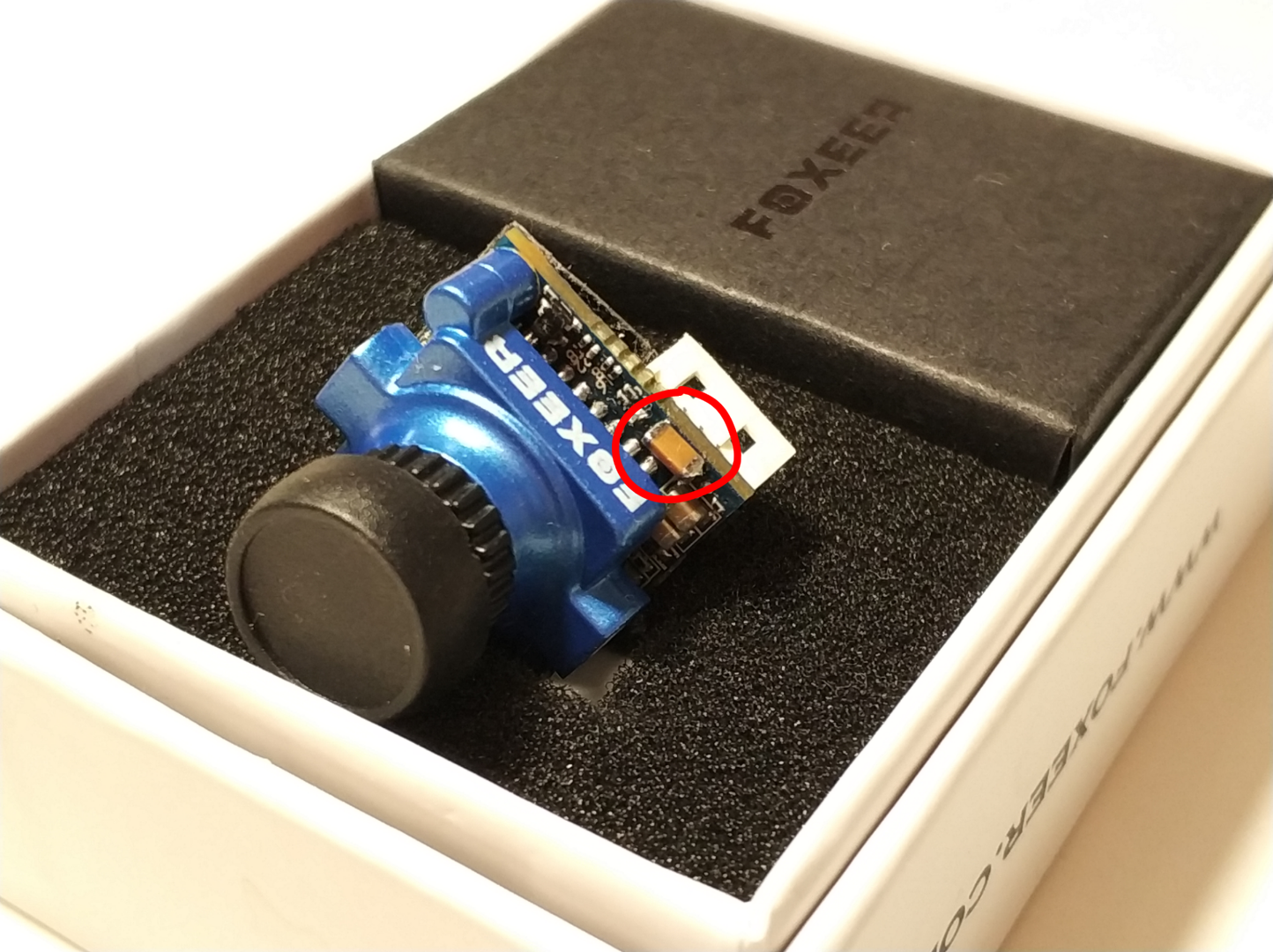 UP&DOWN do not work, hopefully future batches will have the firmware flaw addressed. set camera_control_internal_resistance = 99

Reference voltage for my samples seems to be on the higher side, staying at 3.43 V for a 3S battery, which leads to the problem with UP. This camera seems to register UP key with a logic like:

It results in the camera getting stuck in an infinite loop, even the OSD timer stops counting, as the FC can never output Vmax ~= 3.4.

Works perfectly on the default settings, no capacitor required.

This camera has usually low reference voltage, at least no sample, running up a 4S battery it showed 2.77 V, works perfectly otherwise. No capacitor required.

Based on the values measured with the procedure mentioned above. Found the button resistance values to be consistently above the default.

Please follow manufacturers guidelines from the bottom of this page to avoid such problems!

Which resistor value is best?

Any resistor from the 150-600 Ω will do, with preference to lower values.

Which resistor power rating is required?

Read this thread for help on compatibility.

If you're designing a flight controller, select an MCU pin which you'll be able to provide a dedicated timer for. To add your camera control pin to default target resources assignment, use the following preprocessor macro in target.h file:

Use 150-220 Ω resistor inline between designated MCU pin and the solder pad. Consider adding some additional capacitance to support the widest variety of cameras, a 100 nF ceramic SMD capacitor would be sufficient, anything in the range of 100-500 nF will increase user experience greatly.

If you're designing a camera, the same advice about capacitance applies. It provides debouncing for the physical joystick and simplifies FC configuration for the end user. Having control over camera firmware, make it less restrictive in terms of key voltage levels with some 5-10% of margin from both sides.