You can see a live demo here. 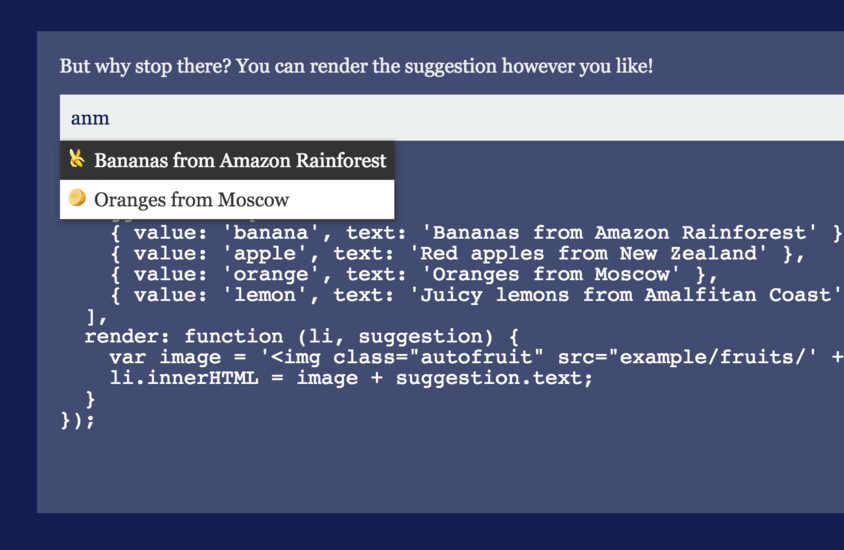 I needed a fast, easy to use, and reliable autocomplete library. The ones I stumbled upon were too bloated, too opinionated, or provided an unfriendly human experience.

The goal is to produce a framework-agnostic autocomplete that is easily integrated into your favorite MVC framework, that doesn't translate into a significant addition to your codebase, and that's enjoyable to work with. Horsey shares the modular design philosophy of Rome, the datetime picker. Furthermore, it plays well with Insignia, the tag editor component, and pretty much any other well-delimited component out there.

You can get it on npm.

Runs when a tag is inserted. The returned string is used to pre-fill the text input. Useful to avoid repetitive user input. The suggestion list can be used to choose a prefix based on the previous list of suggestions.

Can be an object that will be used to store queries and suggestions. You can provide a cache.duration as well, which defaults to one day and is specified in seconds. The cache.duration is used to figure out whether cache entries are fresh or stale. You can disable autocomplete caching by setting cache to false.

Can be a number that determines the maximum amount of suggestions shown in the autocomplete list.

By default suggestions are filtered using the fuzzysearch algorithm. You can change that and use your own filter algorithm instead.

A source(data, done) should be set to a function. The done(err, items) function should provide the items for the provided data.input.

The expected schema for the items object result is outlined below.

Each category is expected to follow the next schema. The id is optional, all category objects without an id will be treated as if their id was 'default'. Note that categories under the same id will be merged together when displaying the autocomplete suggestions.

When this option is set to true, the source(data, done) function will be called even when the input string is empty.

Defaults to null. Set to a string if you want to display an informational message when no suggestions match the provided input string. Note that this message won't be displayed when input is empty even if blankSearch is turned on.

The minimum amount of milliseconds that should ellapse between two different calls to source. Useful to allow users to type text without firing dozens of queries. Defaults to 300.

If set to false, autocomplete suggestions won't be highlighted based on user input.

If set to false, autocomplete suggestions won't be highlighted as whole words first. The highlighter will be faster but the UX won't be as close to user expectations.

By default, items are rendered using the text for a suggestion. You can customize this behavior by setting autocomplete.renderItem to a function that receives li, suggestion parameters. The li is a DOM element and the suggestion is its data object.

By default, categories are rendered using just their data.title. You can customize this behavior by setting autocomplete.renderCategory to a function that receives div, data parameters. The div is a DOM element and the data is the full category data object, including the list of suggestions. After you customize the div, the list of suggestions for the category will be appended to div.

Once you've instantiated a horsey, you can do a few more things with it.

You can however, remove every single suggestion from the autocomplete, wiping the slate clean. Contrary to .destroy(), .clear() won't leave the horsey instance useless, and calling .add will turn it back online in no time.

Detaches this horsey instance from el, removing events and whatnot, and then attaches the instance to target. Note that horsey.find will still only work with el. This method is mostly for internal purposes, but it's also useful if you're developing a text editor with multiple modes (particularly if it switches between a <textarea> and a content-editable <div>).

The anchor value that was originally passed into horse as options.anchor.

Method called whenever we have an anchor and we need to append a suggestion to an input field. Defaults to defaultAppendText.

Method called whenever we have an anchor and we need to append a suggestion for a contentEditable element. Unsupported by default. Provided by banksy.

Method called whenever we have an anchor and we need to filter a suggestion for an input field.

Method called whenever we have an anchor and we need to filter a suggestion for a contentEditable element. Unsupported by default. Provided by banksy.

Once you've instantiated a horsey, some propietary synthetic events will be emitted on the provided el.