Similar to the Minecraft Factions plugin!

Clans have a maximum member limit of 20

Each member can provide up to 5 power to a clan. The more members you have, the more combined power, allowing more items to be stored in the clan vault.

What do clans do?

Clans allow you to team up with other players and combine loot into a shared inventory (vault).

Clan members cannot attack each other.

All members pool their power together for a higher combined clan power which allows more item storage in the vault (1 power = 1 slot).

NEW - All money in the clan bank gets bonus interest money at the end of each day (12AM UTC). The interest rate of a clan depends on the number of members, more members = higher interest (Each member adds 0.5% interest, up to 10% max).

The clan command is the base command for all commands that deal with clans. Not specifying a clan sub-command will cause the command to default to the info sub-command.

How do I increase my clan power?

Your power will passively increase by 1 every 2 hours.

Money you put in the clan bank will gain interest every night at 12AM (UTC). The starting interest rate is 0.5% and increases by 0.5% with each member that joins the clan up to a max of 10%.

Interest is free income added the the money in the clan bank based on how much money there is.

When a clan is using more power than they currently have, they can be raided with the raid command.

When you successfully raid another clan you will see a message telling you to pick an amount of items to steal from their vault. The number of items you can steal is the amount of power they are using minus their current power.

After the raid is finished, your clan will be put on a 1 hour cooldown before being able to raid any other clans. Also, that clan cannot be raided again within an hour.

Example showing what a successful clan raid looks like: 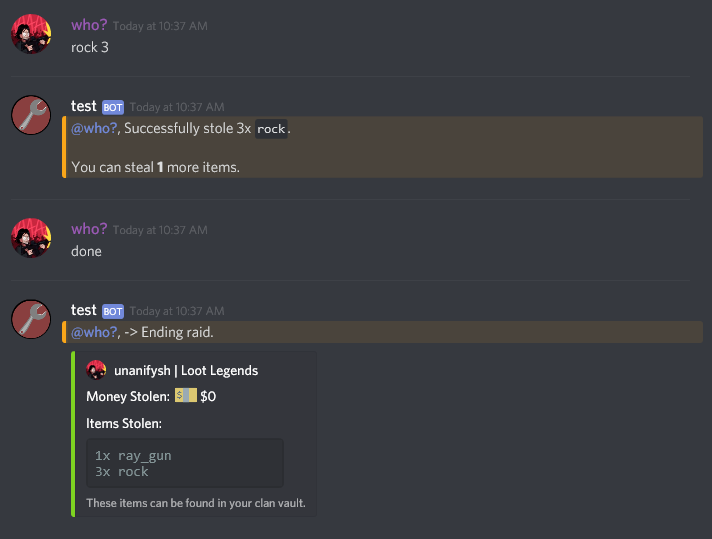