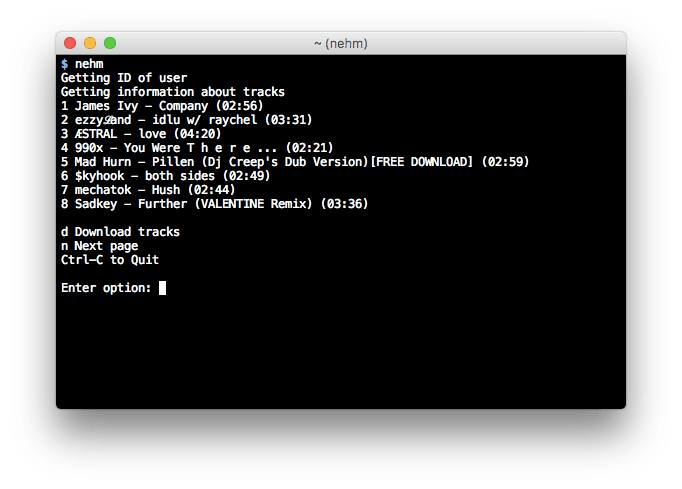 nehm is a console tool written in Go. It can download your likes and search tracks from SoundCloud. All downloaded tracks are ID3 tagged.

nehm wasn't tested on Windows machine, so it can be very buggy on it. I'll be very thankful, if you will report any bug.

If you have ideas to improve nehm, issues and pull requests are always welcome! Also, if you have difficulties with installation/configuration/usage of nehm, don't hesitate to write an issue. I will answer as soon as possible.

or you can download and install binary from latest release.

First of all, you should configure nehm:

permalink - permalink of your SoundCloud profile (last word in your profile URL. More in FAQ)

dlFolder - filesystem path to download folder, where will be downloaded all tracks. By default, your tracks are being downloaded to your home directory

itunesPlaylist - (optional, only for macOS) name of iTunes playlist, where will be added all tracks. By default, your tracks are not being added to iTunes

Type nehm help to list of all available commands or nehm help COMMAND for specific command.

Also commands may be abbreviated to one symbol length. For example, you can input nehm s instead of nehm search.

Synchronize your likes with current folder

Q: What is permalink?

Q: How can I add track to iTunes' music library, but not to any playlist?

A: It depends on language you're using on your Mac. The name of your iTunes' music library you can see here:

For example, english users should use nehm get -i Music, russian users - nehm get -i Музыка.