While Pi-hole's chronometer is nice and other text/console displays are better, I still feel there was the potential for even more. Many of the displays that run chronometer, etc. are LCD touchscreens, yet the "touch" part isn't used. I also like having the ability to customize my Pi-hole display, so using templates for creating the display rather than hardcoding the display into a script also makes sense to me. phad combines support for touchscreens with python templates to let you display multiple screens of data by simply tapping on the screen. If you don't have a touchscreen then you can still have phad cycle between different screens at a rate you determine.

phad's default screens are based on a 3x5" LCD screen and using the Terminus 8x14 console font. Examples of these screens include: 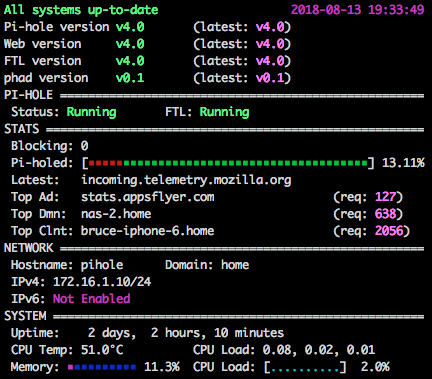 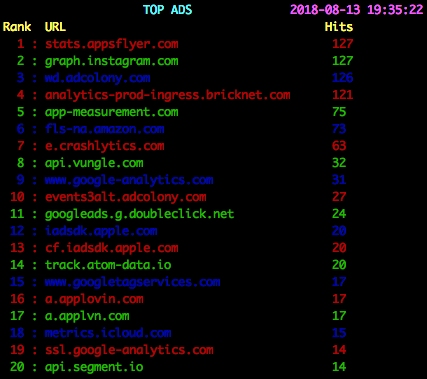 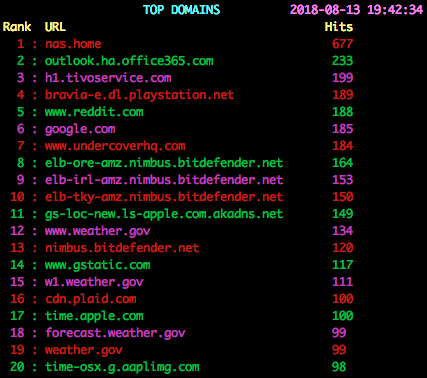 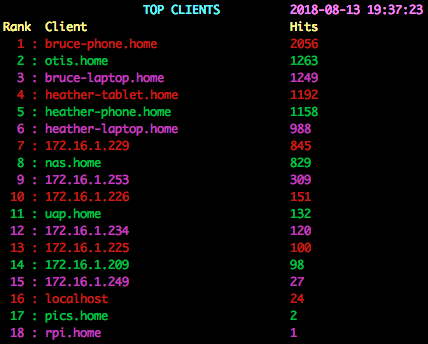 The current version of phad requires Python 3. Prior to v0.4 phad required Python 2. If you currently only have Python 2 available to you then you can download v0.3 manually from https://github.com/bpennypacker/phad/releases/tag/v0.3 and follow its installation instructions.

These following instructions assume you already have a Raspberry Pi configured with Pi-hole and a touchscreen display. As there are many options for hardware and software, any initial setup and configuration is beyond the scope of these instructions.

If you have installed Pi-hole using their One-Step Automated Install, or if you installed it via their basic-install.sh shell script then you can use phad-simple-install.sh to install phad. This can be as smple as using this command in a shell on your Raspberry Pi:

Or you can manually download the installer script and run it that way:

Or, to manually install phad:

Once your pi has rebooted it should display phad's main screen on your pi's display. Simply tap the touchscreen to cycle to other displays (or wait 10 seconds for the display to automatically cycle if you specified -s 10). The default phad configuration will show a summary page followed by pages that show the top ads, domains, and clients.

By default (when -s is not specified) phad will revert back to the main summary page after 10 seconds. (The length of timeout can easily be changed or disabled via the phad.conf file.)

The templates used to display each phad screen are located in the templates directory. These templates are standard Jinja2 templates. Jinja2 is a full featured template engine for Python, and its documentation can be found at http://jinja.pocoo.org/docs/templates/

Both Python variable formatting and Jinja2 templating are well beyond the scope of this README. Please refer to the above two project pages for detailed documnentation on both.

Invoking phad --help will display a summary of command line options. Options are outlined below as well with a bit more detail.

To upgrade to v0.4 simply download the phad script and place it where phad is currently installed. Or you can run the following commands. This will update the phad script itself but will not make any other changes to your environment

The following entries have been removed from phad.conf:

They have been replaced by a single new entry, display_timeout, that defaults to 30 seconds.

If the -s command line option is used then display_timeout is ignored.