A Node.js module to preen unwanted files and folders from packages installed via Bower.

Bower is great but some times it gives you more than you need. These days many packages define paths that are not required in production via the bower.json files ignore property but even then you may still get more than you need. Preens role is to remove any of those unwanted files/paths.

##A Basic Example My projects bower.json file has jquery as a dependency.

which gives the following folder after running bower install 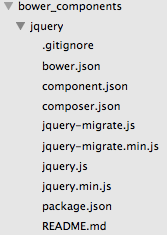 but all I really need for this project is the 4 javascript files. So I update my bower.json with a preen property as follows

and then run preen to end up with

###Updated Example The previous example will not work for newer versions of jquery such as 2.1.1 due to its updated folder structure 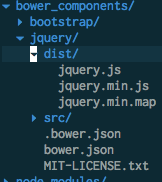 ##Configuration As shown above configuration is done via the preen property of your bower.json file. The preen data object expects properties for each bower installed package that is to be preened in the format

Any packages not listed will not be preened.

You can also add a directory flag to override bower's default directory (or the one set in .bowerrc). This can be useful when using preen as part of your build pipeline. Example: preen --directory ./tmp/path/to/bower/root

##Gulp Task preen can also be used in a gulp task (there is no need for preen to have gulp plugin). The below example would run preen (with no options set) before the default task.

##Dependencies thanks to the following modules that make this one possible

##Credits thanks to @brainboost, @ratbeard and @Taiters for their contributions