when appropriate, the output files are bgzipped and indexed for ease of use.

If you use mosdepth please cite the publication in bioinformatics

See the section below for more info on distribution.

If --by is a BED file with 4 or more columns, it is assumed the the 4th column is the name. That name will be propagated to the mosdepth output in the 4th column with the depth in the 5th column. If you don't want this behavior, simply send a bed file with 3 columns.

To calculate the coverage in each exome capture region:

-n means don't output per-base data, this will make mosdepth a bit faster as there is some cost to outputting that much text.

To create a set of "callable" regions as in GATK's callable loci tool:

The result is a BED file where adjacent bases with depths that fall into the same bin are merged into a single region with the 4th column indicating the label.

Distribution only with modified precision

To get only the distribution value, without the depth file or the per-base and using 3 threads:

Output will go to $sample.mosdepth.dist.txt

This also forces the output to have 5 decimals of precision rather than the default of 2.

The simplest way is to

It can also be installed with brew as brew install brewsci/bio/mosdepth or used via docker with quay:

Unless you want to install nim, simply download the binary from the releases.

mosdepth uses requires htslib version 1.4 or later. If you get an error about "libhts.so not found", set LD_LIBRARY_PATH to the directory that contains libhts.so. e.g.

If you get the error could not import: hts_check_EOF you may need to install a more recent version of htslib.

mosdepth also requires a recent version of PCRE, and will give the error could not import: pcre_free_study if the version of PCRE on your system is too old. If you do not have root and cannot get the system version of PCRE upgraded, you download and compile a local copy

If you do want to install from source, see the travis.yml and the install.sh.

If you use archlinux, you can install as a package

This is useful for QC.

Each row will indicate:

The last value in each chromosome will be coverage level of 0 aligned with 1.0 bases covered at that level.

Using something like that, we can plot the distribution from the entire genome. Below we show this for samples with ~60X coverage: 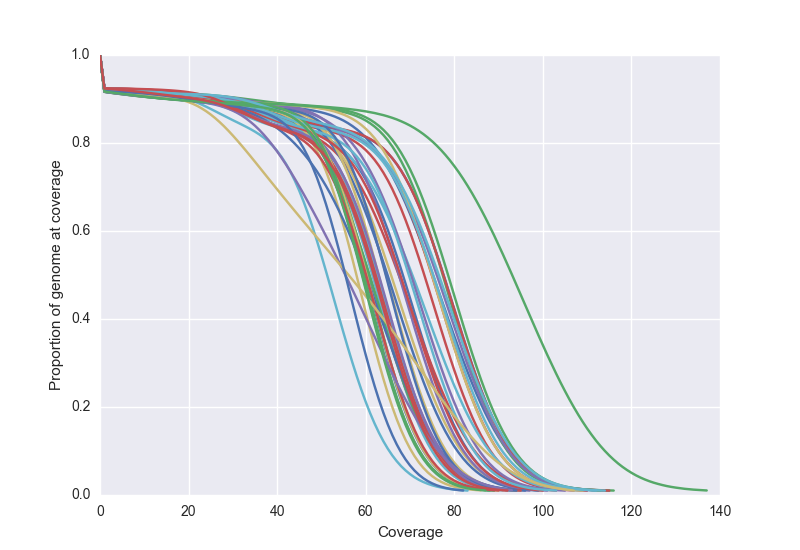 We can also view the Y chromosome to verify that males and females track separately. Below, we that see female samples cluster along the axes while male samples have close to 30X coverage for almost 40% of the genome. 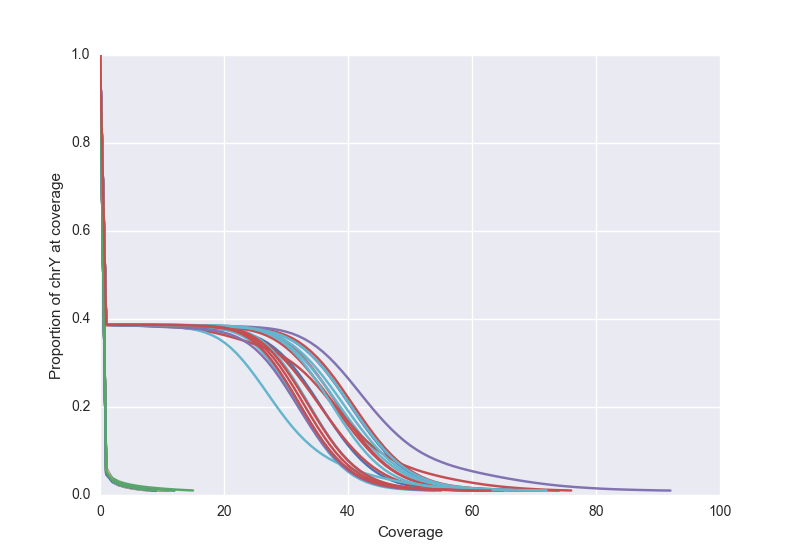 given a set of regions to the --by argment, mosdepth can report the number of bases in each region that are covered at or above each threshold value given to --thresholds. e.g:

will create a file $prefix.thresholds.bed.gz with an extra column for each requested threshold. An example output for the above command (assuming exons.bed had a 4th column with gene names) would look like (including the header):

If there is no name (4th) column in the bed file send to --by then that column will contain "unknown" in the output.

This is extremely efficient. In our tests, excluding per-base output (-n) and using this argument with 111K exons and 12 values to --thresholds increases the run-time by < 5%.

quantize allows splitting coverage into bins and merging adjacent regions that fall into the same bin even if they have different exact coverage values. This can dramatically reduce the size of the output compared to the per-base.

An example of quantize arguments:

To change what is reported as the bin number, a user can set environment variables e.g.:

In this case, the bin label is replaced by the text in the appropriate environment variable.

This is very efficient. In our tests, excluding per-base output (-n) and using this argument with 9 bins to --quantize increases the run-time by ~ 20%. In contrast, the difference in time with and without -n can be 2-fold.

As it encounters each chromosome, mosdepth creates an array the length of the chromosome. For every start it encounters, it increments the value in that position of the array. For every stop, it decrements that position. From this, the depth at a particular position is the cumulative sum of all array positions preceding it (a similar algorithm is used in BEDTools where starts and stops are tracked separately). mosdepth avoids double-counting overlapping mate-pairs and it tracks every aligned part of every read using the CIGAR operations. Because of this data structure, the the coverage distribution calculation can be done without a noticeable increase in run-time. The image below conveys the concept:

This array accounting is very fast. There are no extra allocations or objects to track and it is also conceptually simple. For these reasons, it is faster than samtools depth which works by using the pileup machinery that tracks each read, each base.

The mosdepth method has some limitations. Because a large array is allocated and it is required (in general) to take the cumulative sum of all preceding positions to know the depth at any position, it is slower for small, 1-time regional queries. It is, however fast for window-based or BED-based regions, because it first calculates the full chromosome coverage and then reports the coverage for each region in that chromosome. Another downside is it uses more memory than samtools. The amount of memory is approximately equal to 32-bits * longest chrom length, so for the 249MB chromosome 1, it will require 1GB of memory.

mosdepth, samtools, bedtools, and sambamba were run on a 30X genome. relative times are relative to mosdepth per-base mode with a single thread.

mosdepth can report the mean depth in 500-base windows genome-wide info under 9 minutes of user time with 3 threads.

Note that the threads to mosdepth (and samtools) are decompression threads. After about 4 threads, there is no benefit for additional threads: 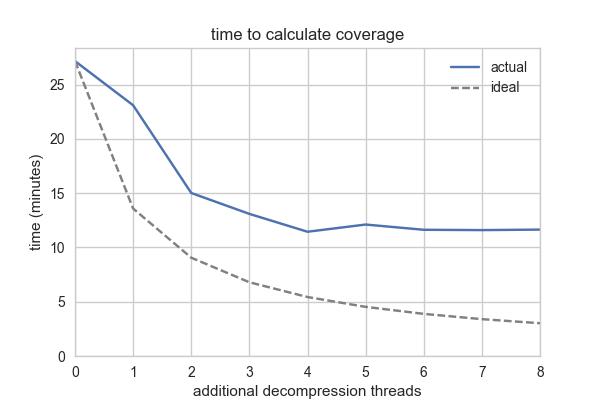 We compared samtools depth with default arguments to mosdepth without overlap detection and discovered no differences across the entire chromosome.