Note: even though the project might seem dead, I do use this terminal. It just happens to be good enough for my purposes so I don't bother updating it. If you have trouble making it work, have suggestions or want to contribute anything, please do tell me about it :)

Terminus is a terminal emulator with the ability to create and manipulate inline HTML cells in addition to plain text. In its current state, it can already serve as an xterm replacement (bar some escape codes that are not yet supported).

For the most part, Terminus plays nice with existing UNIX utilities: I have organized most of its capabilities in a line-based approach, so notwithstanding one or two gotchas, they play nice with command-line utilities such as grep or sed. Since it's all based on escape codes, the enhanced display options also work through SSH.

Terminus requires node and its package manager, npm, to be installed.

You can also go to /debug or /python instead of /bash. Read the server.yaml file.

If you don't want to mess with an existing, more recent version of node, you can install node 0.5.9 in some isolated place with configure --prefix=~/local, or you can omit make install and run /path/to/node/out/Release/node.

There's also a Python server but it's pretty bad compared to the node one (plus, I broke it). You can go back in time on the repo (Feb 15-ish) if you want to try that.

IMPORTANT: client/server communication is not encrypted at all (for the time being - integrating ssl should be easy enough). Only run Terminus locally, and don't run it on a shared machine!

IMPORTANT: using escape codes, programs can do arbitrary javascript injection, and this includes simulating keyboard strokes and typing commands on your shell. Because of this, it is technically possible for serious wreckage to occur with a mere cat of a malicious file. Anybody who can tell me how to properly sandbox JavaScript within JavaScript to avoid this gets a cookie.

Terminus is used much like a normal xterm. You can run commands like top, emacs, vi, ipython or ssh without many problems. Not all escape codes are handled yet and there might be some slight bugs in those that are, so commands like reset (!) and screen are iffy, and for some reason ipython seems to show the wrong colors. You can paste with Ctrl+V or the mouse wheel.

You can start exploring with the applications that are in bin/. So far, they are dr, show, tcmd, box and xkcd. You will have to add them to your PATH in order to execute them unqualified.

I have taken screenshots of myself using each of the commands. I think they speak for themselves. 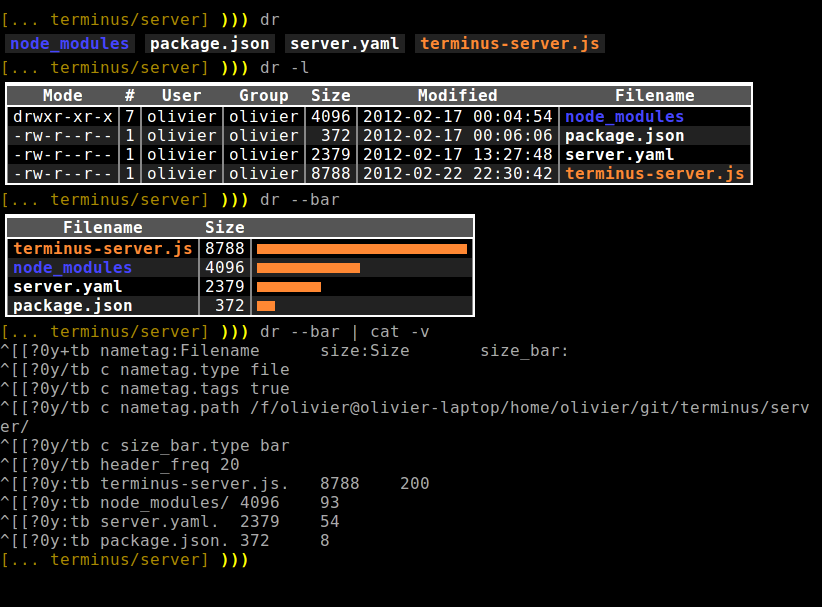 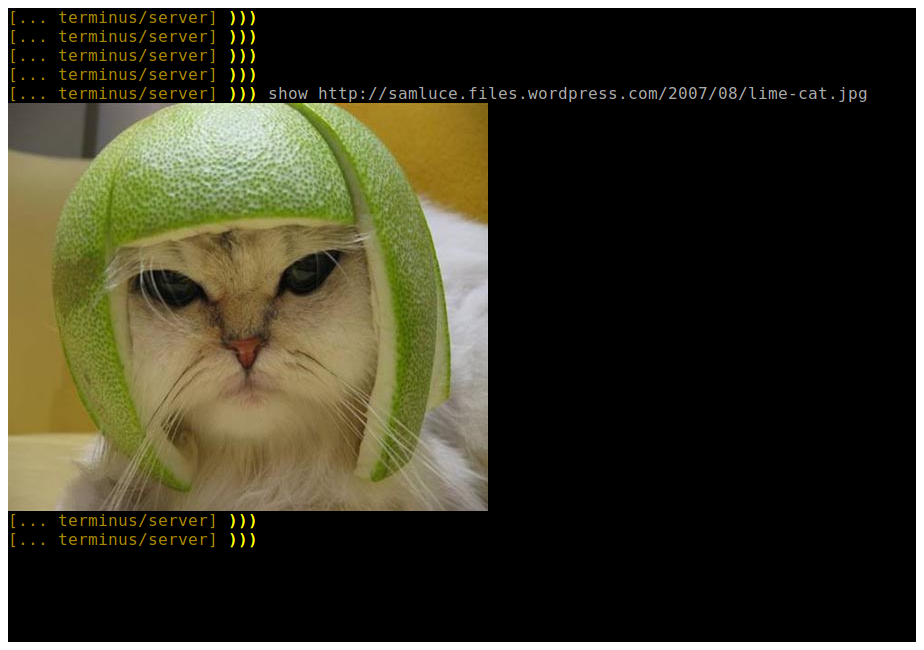 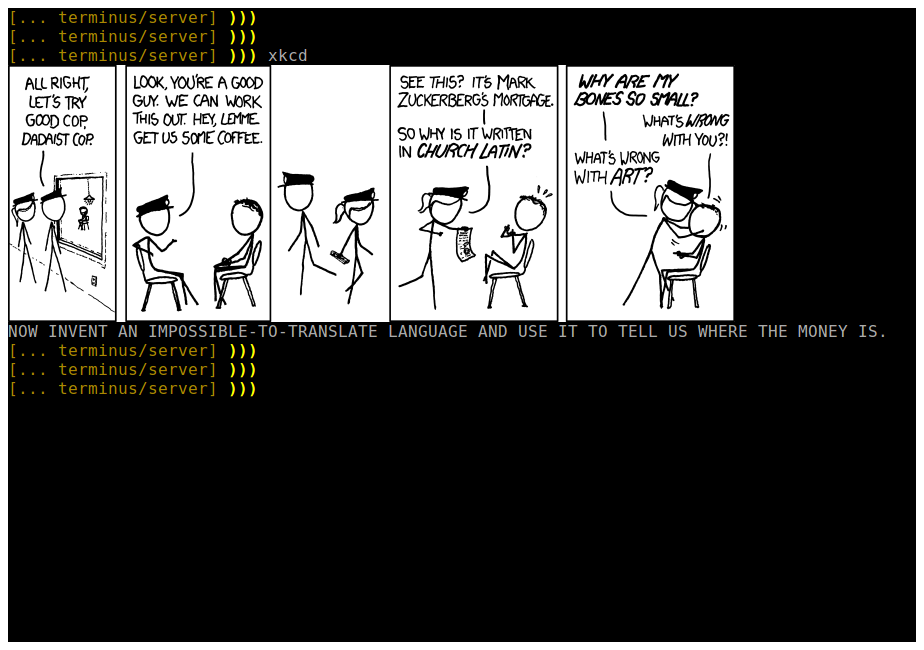 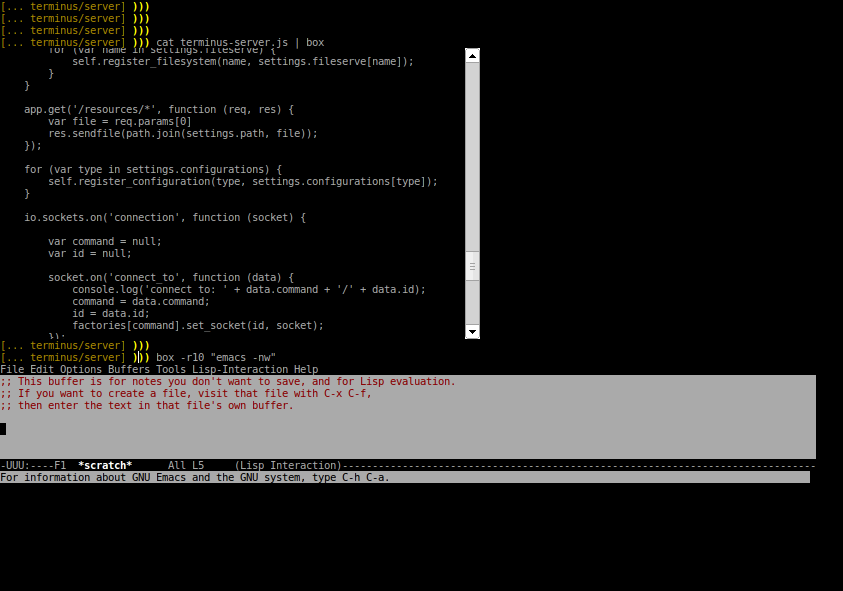 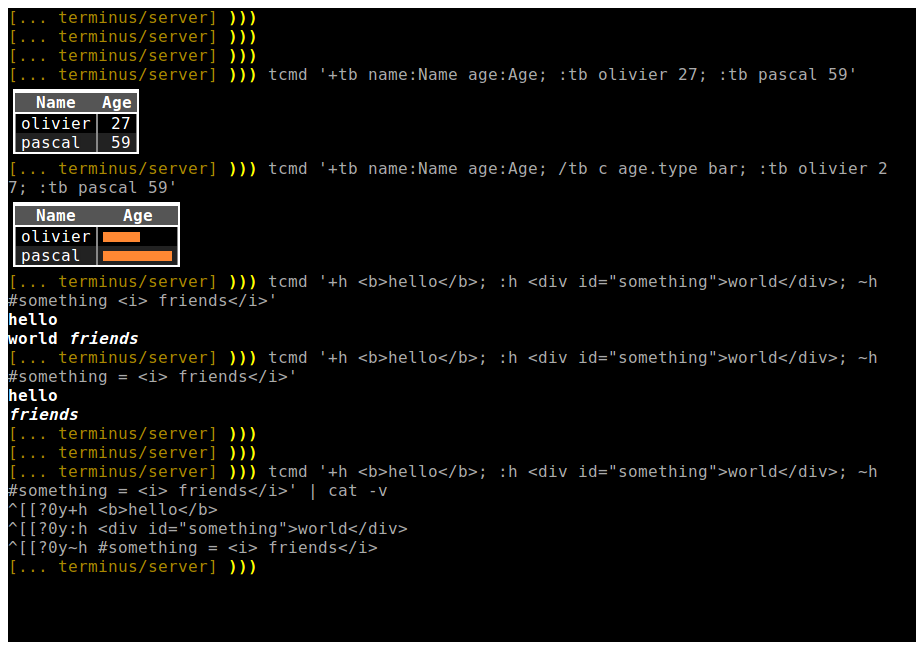 (note: the tb example doesn't work like that anymore, you now have to use \t as a separator instead of a space) 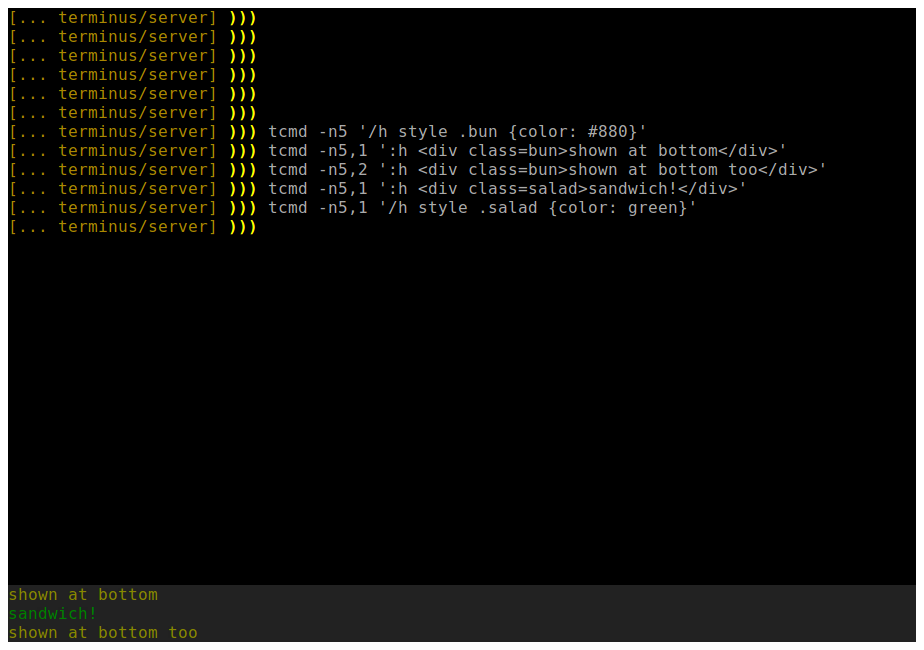 So, you see, it's really easy. Since it works with escape codes on stdout, you can take advantage of the features in any language without any special libraries, and it works through plain SSH as well (except obviously for the fact that the remote filesystem is not mounted by default - but you can do it with sshfs and config).

Shift-Space <letter>: Same as Control-<letter>, but since most browsers don't allow catching some shortcuts (e.g. Control-w) this is the only way to send some control codes. I might change that binding, because it's too easy to accidentally hit shift-space right after a shifted characted.

Control-Shift-b: Drop all unprocessed characters in the queue. This is handy if a program prints data faster than Terminus can handle it.

Control-Shift-c Space: Clear elements that are absolutely positioned at the top, left, right and bottom of the terminal screen, if they are present.

Control-Shift-l: Clear all lines in the scrollback.

F5: Refresh the page. This does not terminate your session and will solve most problems, at the expense of losing the screen's contents and the scrollback.

The list of key bindings can be found here.

See server/server.yaml and resources/settings/default.yaml. The options are extensive (including nearly total customization of key bindings), and documented. If you change default.yaml you can just refresh the page to see the changes (you won't lose your session - it will connect right back to it).