This tutorial replaces Tutorial#2800 and applies to data types within the scope of the GATK Best Practices variant discovery workflow.

We provide example data and example commands for performing local realignment around small insertions and deletions (indels) against a reference. The resulting BAM reduces false positive SNPs and represents indels parsimoniously. First we use RealignerTargetCreator to identify and create a target intervals list (step 1). Then we perform local realignment for the target intervals using IndelRealigner (step 2).

Jump to a section

Why do indel realignment?

Local realignment around indels allows us to correct mapping errors made by genome aligners and make read alignments more consistent in regions that contain indels.

Genome aligners can only consider each read independently, and the scoring strategies they use to align reads relative to the reference limit their ability to align reads well in the presence of indels. Depending on the variant event and its relative location within a read, the aligner may favor alignments with mismatches or soft-clips instead of opening a gap in either the read or the reference sequence. In addition, the aligner's scoring scheme may use arbitrary tie-breaking, leading to different, non-parsimonious representations of the event in different reads.

In contrast, local realignment considers all reads spanning a given position. This makes it possible to achieve a high-scoring consensus that supports the presence of an indel event. It also produces a more parsimonious representation of the data in the region .

This two-step indel realignment process first identifies such regions where alignments may potentially be improved, then realigns the reads in these regions using a consensus model that takes all reads in the alignment context together.

For simplicity, we use a single known indels VCF, included in the tutorial data. For recommended resources, see Article#1247.

In the command, RealignerTargetCreator takes a coordinate-sorted and indexed BAM and a VCF of known indels and creates a target intervals file.

In the resulting file, 7156_realignertargetcreator.intervals, intervals represent sites of extant and potential indels. If sites are proximal, the tool represents them as a larger interval spanning the sites.

The first ten rows of 7156_realignertargetcreator.intervals are as follows. The file is a text-based one-column list with one interval per row in 1-based coordinates. Header and column label are absent. For an interval derived from a known indel, the start position refers to the corresponding known variant. For example, for the first interval, we can zgrep -w 96000399 INDEL_chr10_1Mb_b37_1000G_phase3_v4_20130502.vcf for details on the 22bp deletion annotated at position 96000399.

To view intervals on IGV, convert the list to 0-based BED format using the following AWK command. The command saves a new text-based file with .bed extension where chromosome, start and end are tab-separated, and the start position is one less than that in the intervals list. 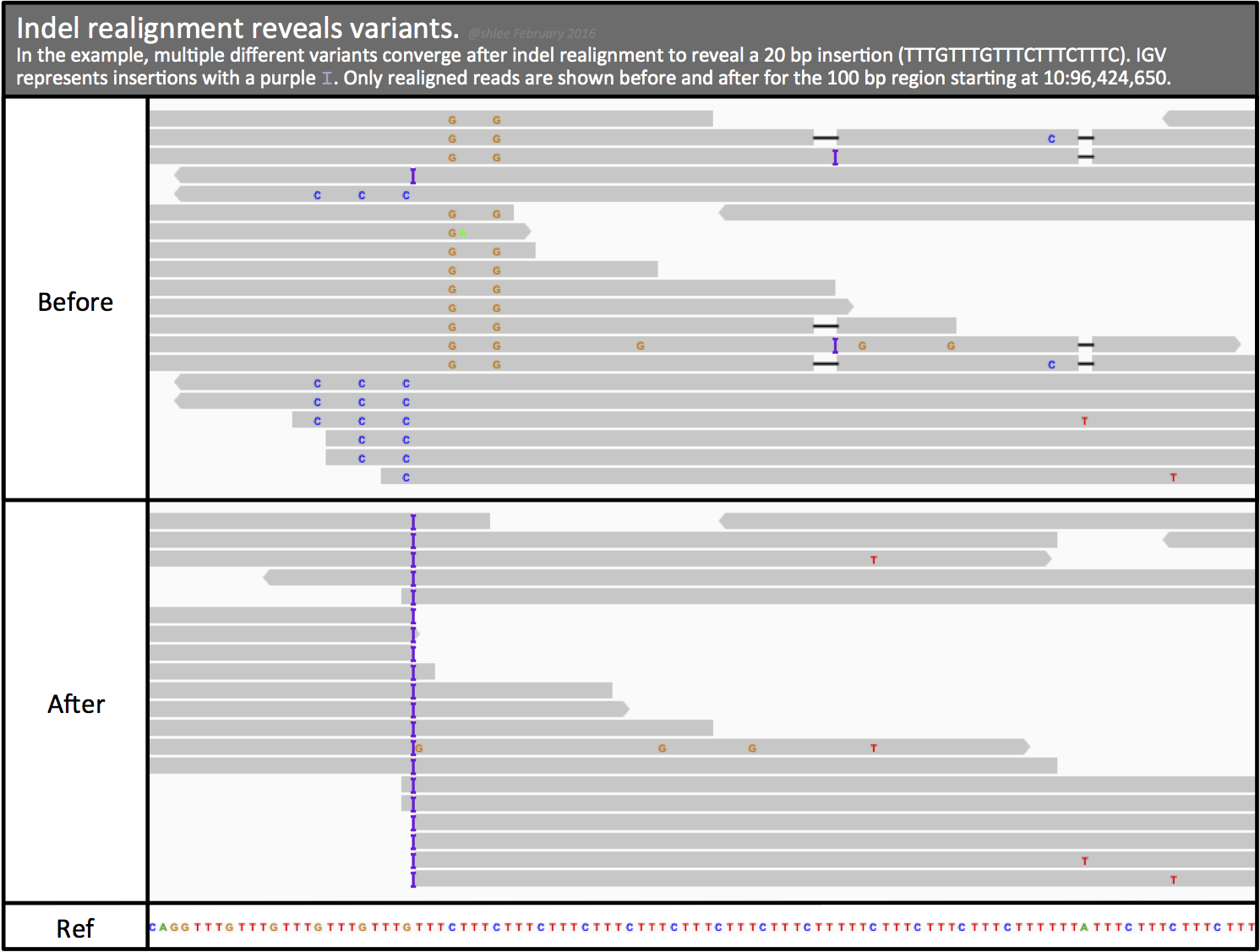 The resulting coordinate-sorted and indexed BAM contains the same records as the original BAM but with changes to realigned records and their mates. Our tutorial's two IGV screenshots show realigned reads in two different loci. For simplicity, the screenshots show the subset of reads that realigned. For screenshots of full alignments for the same loci, see here and here.

For our example data,194 alignment records realign for ~89 sites. These records now have the OC tag to mark the original CIGAR string. We can use the OC tag to pull out realigned reads and instructions for this are in section 4. The following screenshot shows an example pair of records before and after indel realignment. We note seven changes with asterisks, blue for before and red for after, for both the realigned read and for its mate.

Changes to the example realigned record:

RealignerTargetCreator documentation has a -maxInterval cutoff to drop intervals from the list if they are too large. This is because increases in number of reads per interval quadratically increase the compute required to realign a region, and larger intervals tend to include more reads. By the same reasoning, increasing read depth, e.g. with additional alignment files, increases required compute.

You can project the genomic coverage of the intervals as a function of the interval density (number of intervals per basepair) derived from varying the known indel density (number of indel records in the VCF). This in turn allows you to anticipate compute for indel realignment. The density of indel sites increases the interval length following a power law (y=ax^b). The constant (a) and the power (b) are different for intervals created with VCF only and with VCF+BAM. For our example data, these average interval lengths are well within the length of a read and minimally vary the reads per interval and thus the memory needed for indel realignment.