Boot any rails app in under a second.

Zeus preloads your Rails app so that your normal development tasks such as console, server, generate, and specs/tests take less than one second.

This screencast gives a quick overview of how to use zeus with Rails. 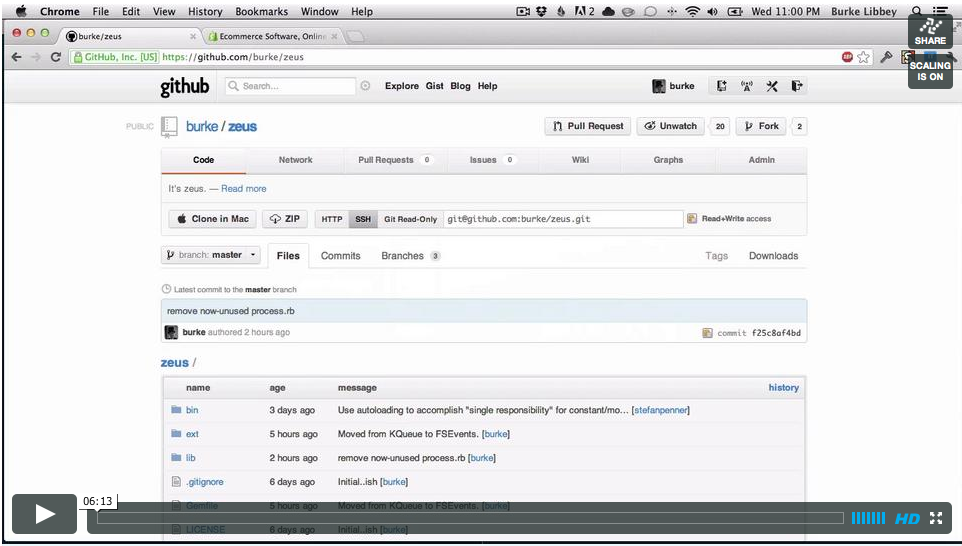 More generally, Zeus is a language-agnostic application checkpointer for non-multithreaded applications. Currently only ruby is targeted, but explicit support for other languages is possible.

Requirements (for use with Rails)

Please note: Zeus requires your project to be running on a file system that supports FSEvents or inotify. This means no NFS, CIFS, Samba, or VBox/VMWare shared folders.

A: No. You can, but running bundle exec zeus instead of zeus adds precious seconds to commands that otherwise would be quite a bit faster. Zeus was built to be run from outside of bundler.

In your app's directory initialize zeus:

which will create two files

Force the test environment: In test/test_helper.rb (or spec/spec_helper.rb if using RSpec), change:

The server will print a list of available commands.

Run some commands in another shell:

You need to restart zeus if you make changes to various initialization files. Examples of these files include:

If you're switching from Spork, be sure to read the wiki page on Spork.

To get started hacking on Zeus itself, see docs/overview.md.

The default plan bundled with zeus only supports Rails 3.x and 4.x. There is a project to provide Rails 2.3 support here, however it has not been updated in some time.

Due to official Ruby support lapsing in Feb 2015, Ruby 1.9.3 and below are no longer officially supported. Zeus may work with them but we are not actively supporting them at this time. The last release tested with these versions is 0.15.4.

Boot any rails app in under a second.