Executable that mutates its own code

Since this is proof of concept, no actually malicious payload is included. Dropped files that begin with "Debug_" can be omitted completely, but are written to disk to visualize the build process.

Expecting well readable code? Design patterns? Maybe you should stop reading here, because this binary is optimized for maximum obscurity and minimum file size! For this, a custom build process is implemented. When running Build.exe, the binary is compiled using CodeDOM for the first time, named SelfMorphingCSharpBinary.exe. This binary contains the file Payload.exe from the resources of Build.exe. The payload, strings and variable names are encrypted and obfuscated.

For the sake of debugging and visualizing, all generated code files are written to disk.

Step 1: Build.exe takes Stub.cs from its resources and processes, then compiles it. The original file looks like this: 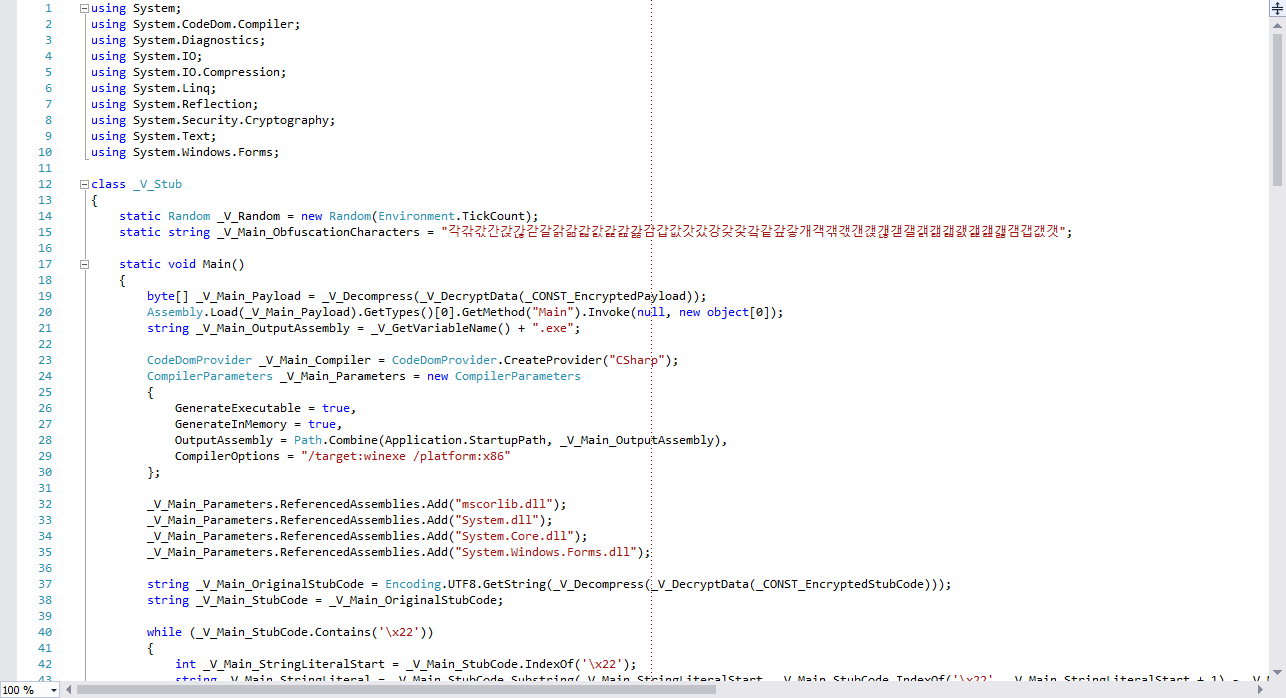 Because the binary needs to obfuscate itself on runtime, the original code must be included as well, somewhat similar to a quine. No managed resources are used, just byte[] literals. Variables that start with "V" will be renamed using characters from line 15.

Variable names from the original code, which is included as a byte[] literal, will also be obfuscated. However, alphanumerical characters are used. This is the code that is compiled along with the actual binary: 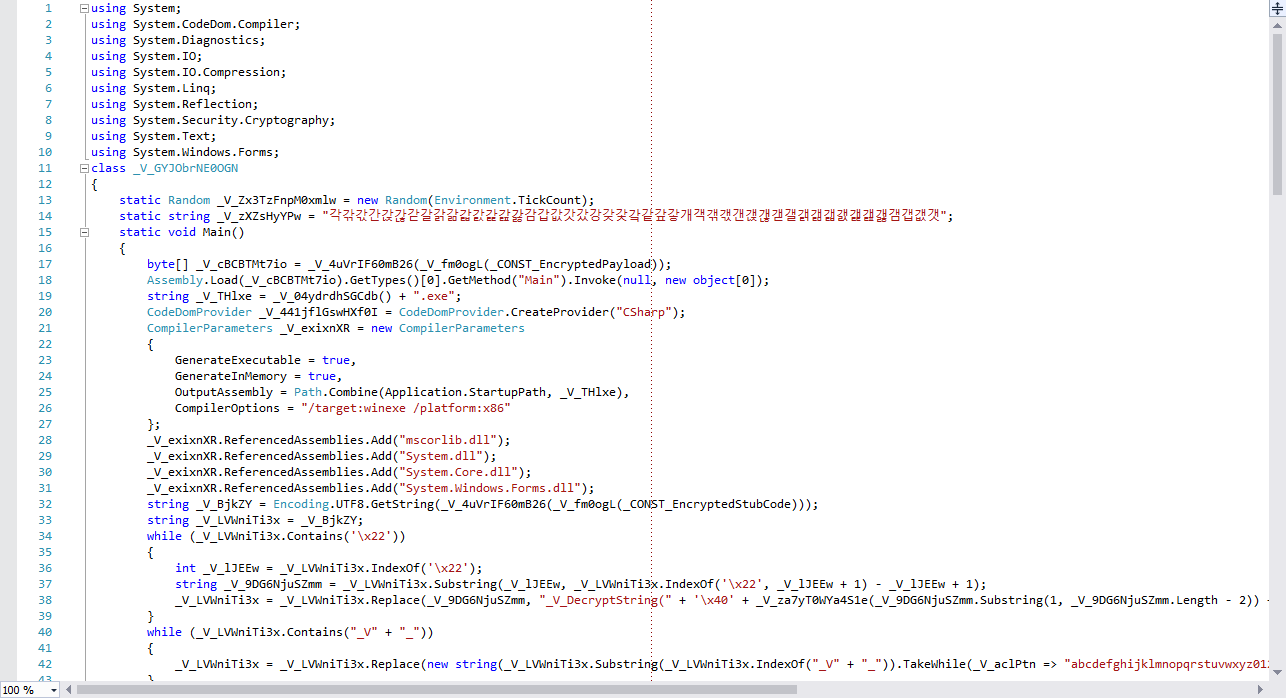 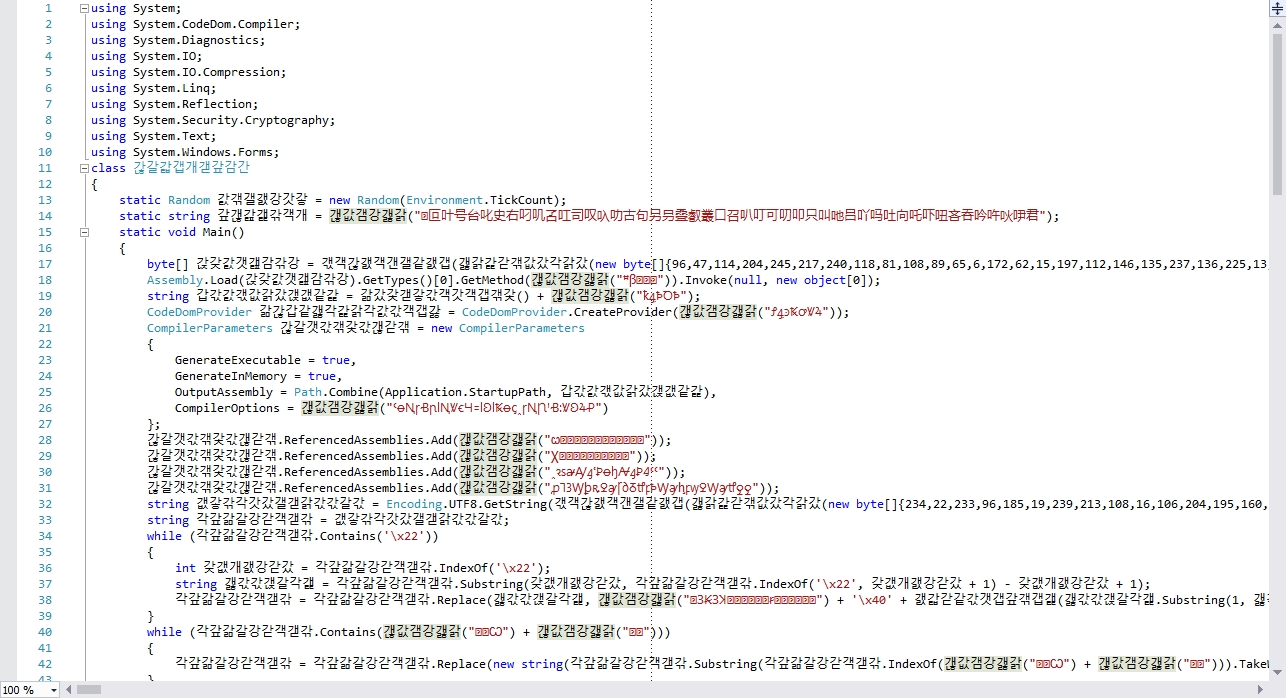 This is also what you get when decompiling the binary. The highlighted text, for instance, is a method that decrypts strings. The payload is executed in memory on line 18 using Assembly.Load().Invoke(). For instance, the encrypted string in GetMethod(...) is actually "Main".

So, our well obfuscated binary (screenshot 3) now contains the payload and its own pre-obfuscated code (from screenshot 2), both encrypted using AES and a random key. The key must also be included.

When executed, first the payload is decrypted and executed in memory, displaying a simple message box. Remember, that the payload is a separate and replaceable executable file. Next, the binary takes its original code from the byte[] literal and does basically the same as what our build tool did: Encrypt both payload and its own code, encrypt all strings and obfuscate all variable names. In this instance, the binary has morphed. Every literal and symbol name is encrypted and obfuscated with a different random key each time the binary is executed.

Since we are talking about a "self-morphing" binary, the original file should replace itself. For this, we call cmd with a command that takes one second, piped by moving the file to the correct place. This may be improved, but serves its purpose for now.

Step 3: Looking at the binary when decompiled... Result: Yes, it is obfuscated and very incomprehensive. Note, that there are professional obfuscators available. But here, we need a very minimalistic obfuscator that is built in and can re-compile and obfuscate even itself. 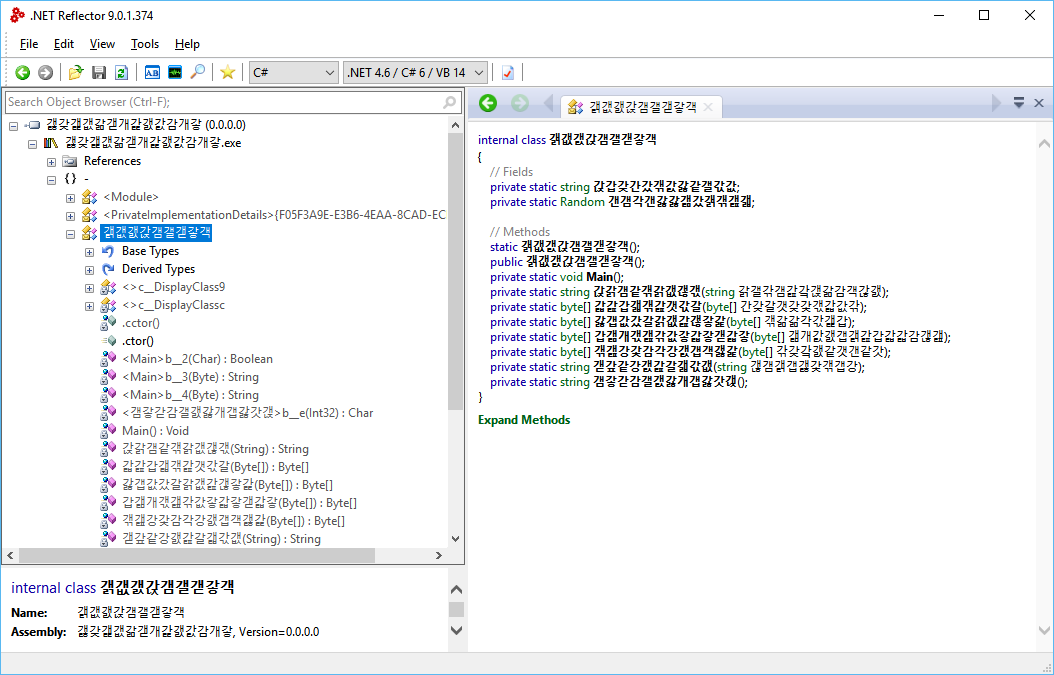 Executable that mutates its own code