Sign up
No description, website, or topics provided.
Find file
Pull request Compare This branch is 1 commit ahead, 1 commit behind jodoma:master.

DataPlay is an open-source data analysis and exploration game developed by PlayGen as part of the EU's CELAR initiative and further extended to support CACTOS Project.

The aim of DataPlay, besides taking CELAR for a spin, is to provide a collaborative environment in which non-expert users get to "play" with government data. The system presents the user with a range of elements of the data, displayed in a variety of visual forms. People are then encouraged to explore this data together. The system also seeks to identify potential correlations between disparate datasets, in order to help users discover hidden patterns within the data.

DataPlay also serves as an excellent use case for CACTOS. First, better resource utilisation and allocation. In order to keep applications infrastructural cost in control it is necessary to have control over when and what should be scaled. We have an ultimate aim of transforming application to fully-automated system which can work with minimum human interventions. We envision to use workload model which will be mostly using Automation in deployment and monitoring of system components. Additionally we would also like to utilise enhanced data center infrastructure where CACTOS will allow to select best possible assembly of hardware and tools to improve the performance of the cloud system as a whole.

With the help of dynamic workload distribution we expect performance improvements over a considerable part of our application which heavily relies on on-demand scaling of resources, when scaling is done across the infrastructure newly allocated VM’s initial execution time will decrease. If segmentation is done optimally there is a possibility of good cost saving and lower maintenance efforts. We also plan to utilise simulation framework in order to test application’s sustainability under very large load and which could answer certain performance question for real market scenarios.

The back end is written in Go, to provide concurrency for large volume data processing. There is a multiple master/frontend architecture which relies on HAProxy for its Load-balancing capabilities. The backend also utilises Martini for parametric API routing, number of PostgreSQL replicated and load balanced using pgpool-II with GORM for facilitating communication between back end and database, Cassandra coupled with gocql for data obtained via scraping of 3rd party news sources. Redis for storing monitoring and session related data.

The front end is written in CoffeeScript on top of AngularJS and makes extensive use of the libraries such as D3.js, dc.js and NVD3.js for presenting data in the form of various charts. The user interface is created using Bootstrap, Bootswatch and Font Awesome.

DataPlay contains a rudimentary selection of datasets drawn from DATA.GOV.UK & LONDON DATASTORE, along with political information taken from the BBC, which was extracted and analysed via import.io, kimono and embed.ly. 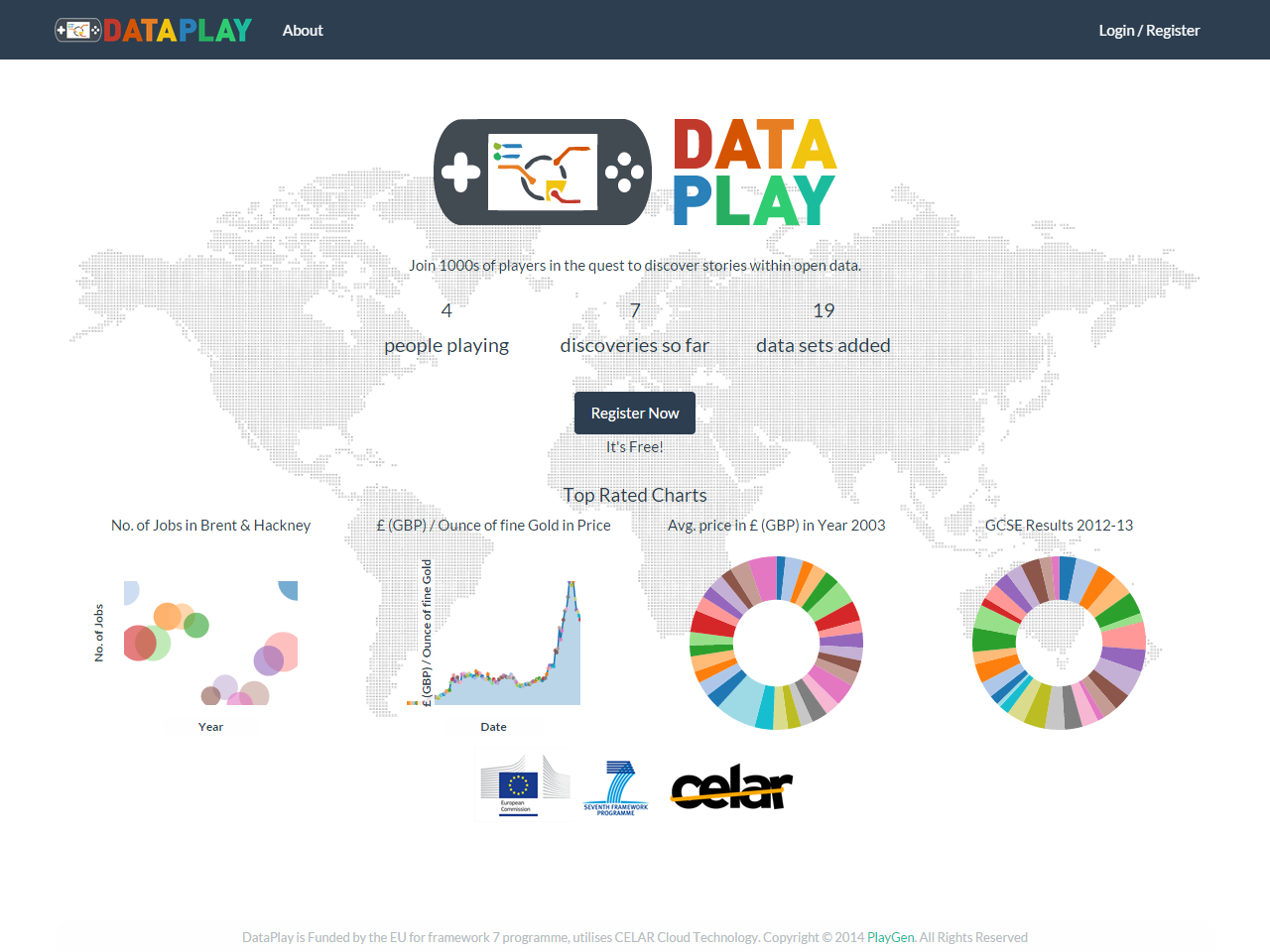 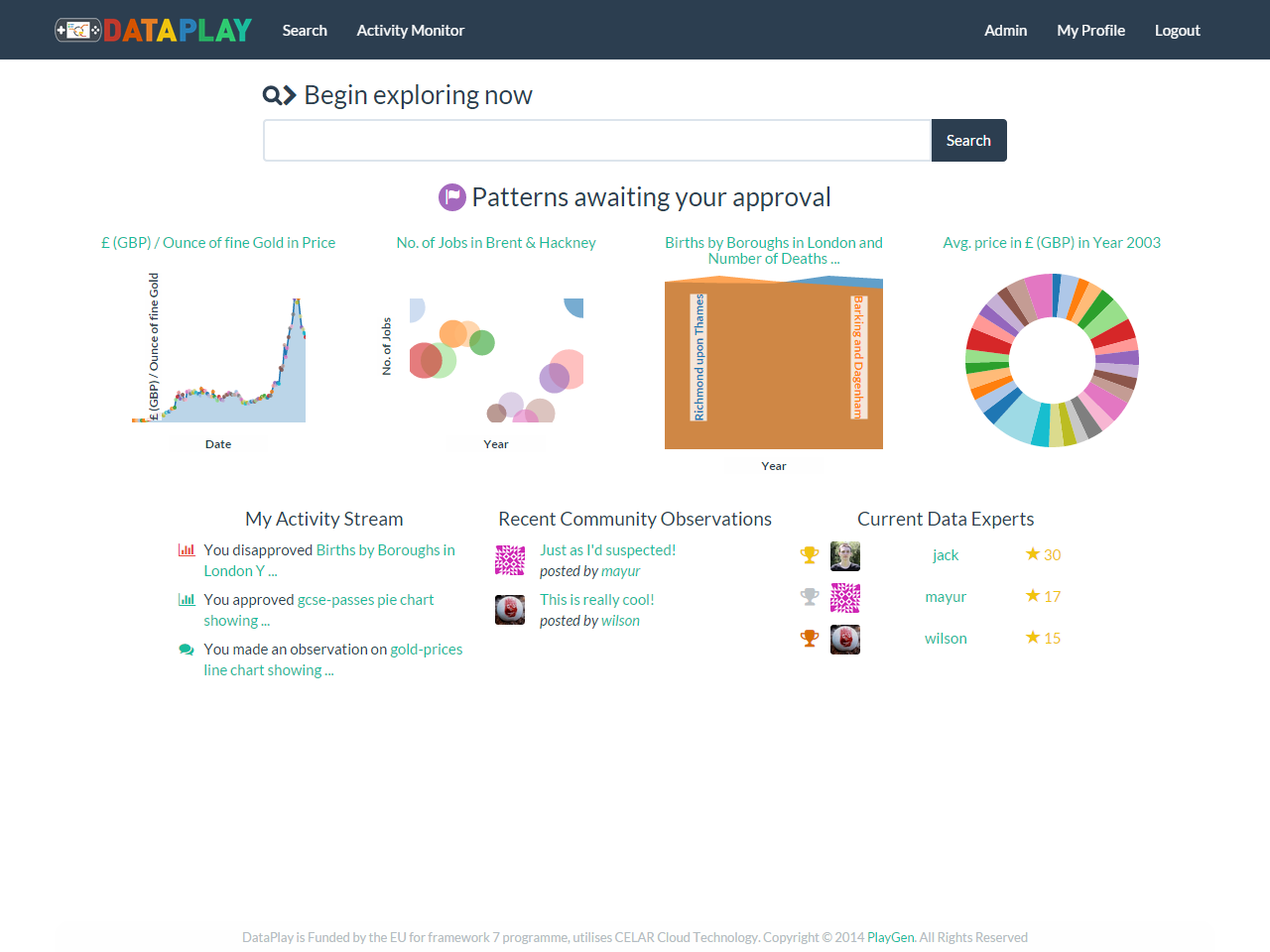 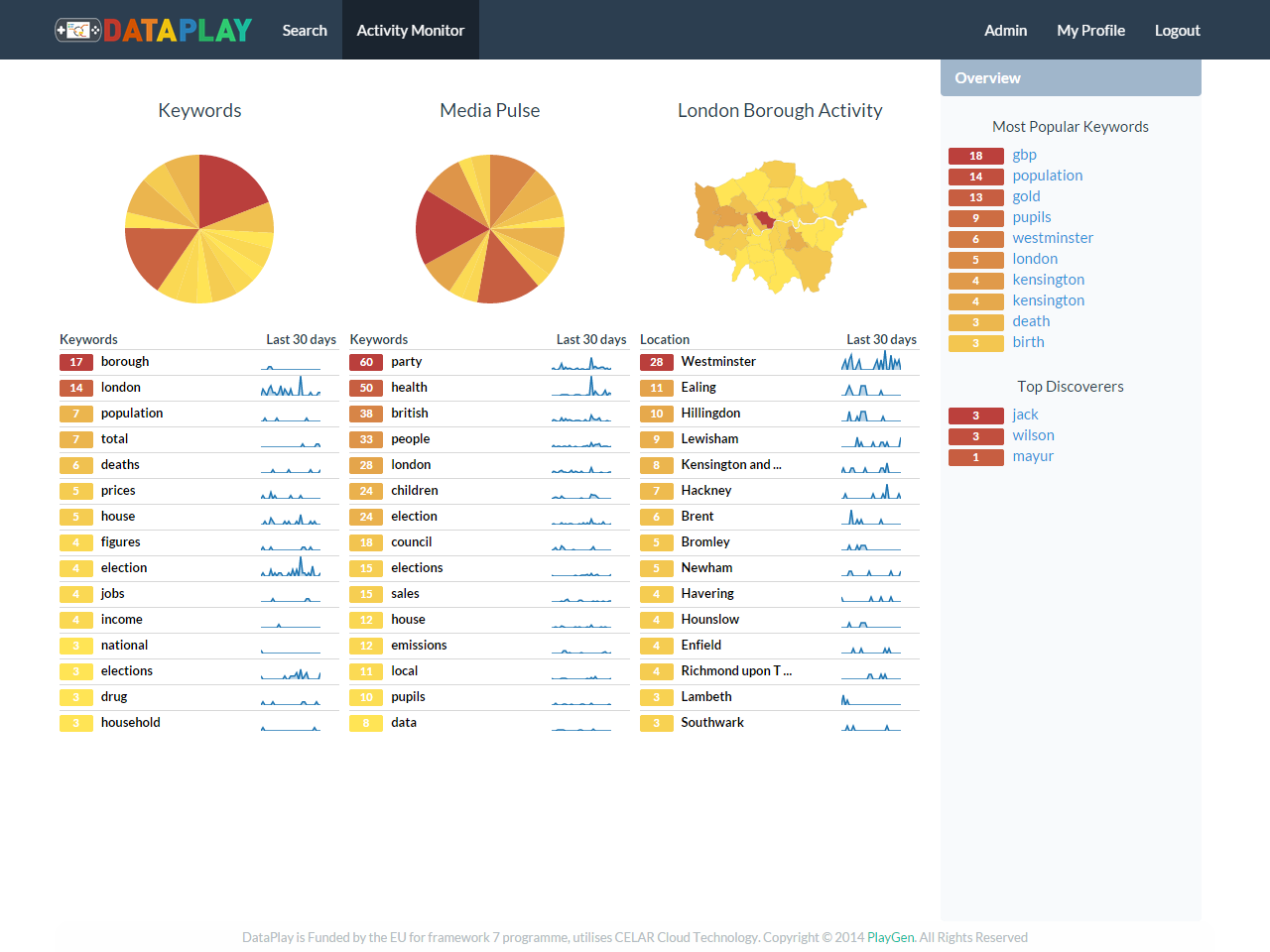 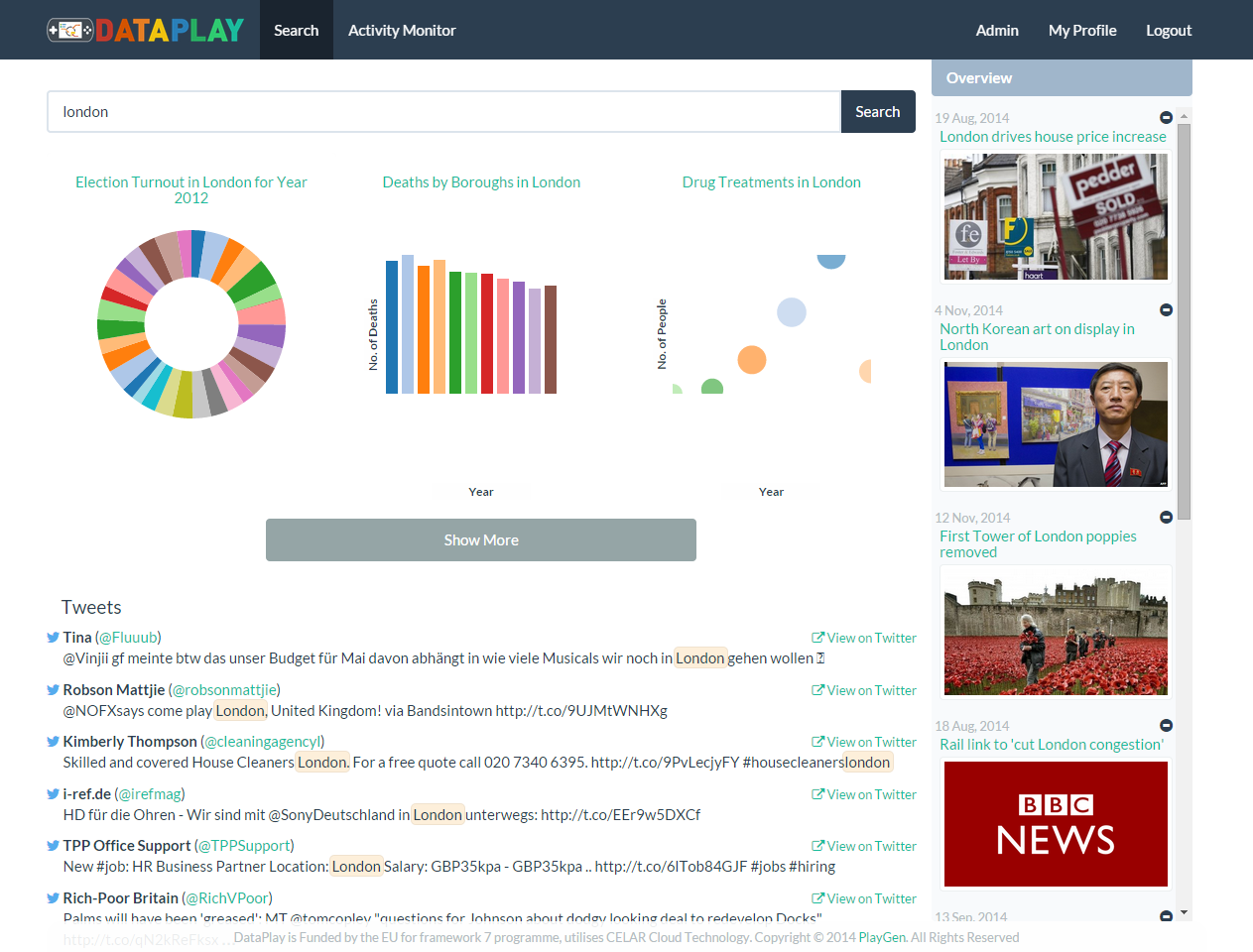 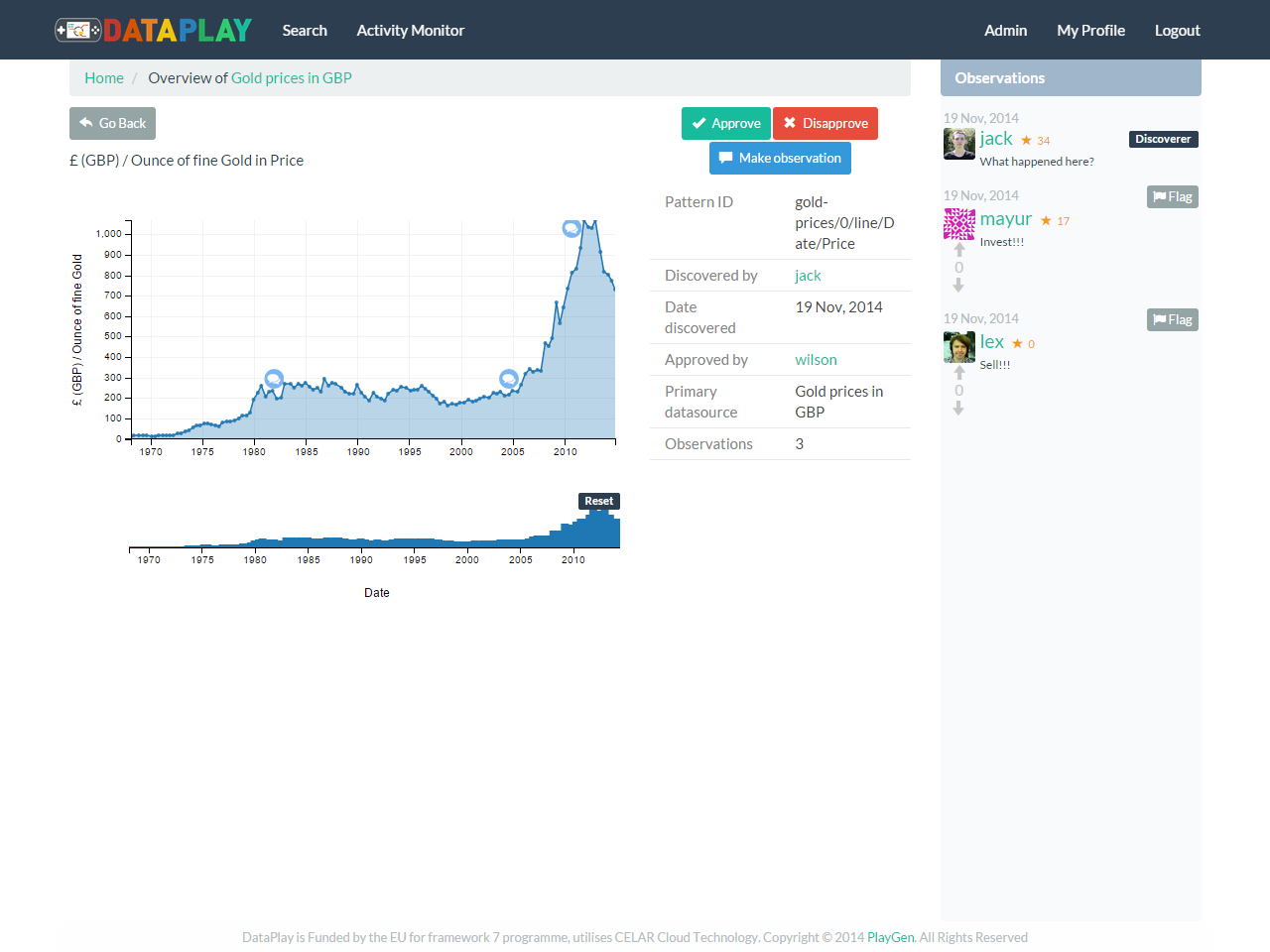 Note: Refer tools/deployment/base.sh for base system config and libs.

The original authors of this application are no longer employed at PlayGen. This software is no longer being maintained by PlayGen, use at your own risk.

This program is free software: you can redistribute it and/or modify it under the terms of the GNU General Public License version 3.0 as published by the Free Software Foundation.

You should have received a copy of the GNU General Public License along with this program. If not, see LICENSE.