Summary: The current stable versions belong to 5.0.x line. For Docker this also means you can use 5.0 as a tag to always get the latest stable. If installing from source code repository just use 5.0.x tags, whichever is the highest. Please don't confuse tags with branches (which are used for development only).

Concerto is an open-source online adaptive test development platform and its source code repository is hosted on GitHub [https://github.com/campsych/concerto-platform]. The project's issue tracker and wiki can also be found there.

Each released version has a corresponding tag. Our versioning strategy is XX.YY.ZZ, where XX and YY are considered major iterations, with possible breaking changes between them, and ZZ are minor incremental changes.

Any changes committed to the source code repository trigger a build process on Travis [https://travis-ci.org/campsych/concerto-platform] where it can be tracked.

A successful build process will result in the creation of a Docker container that is hosted and can be pulled from Docker Hub [https://hub.docker.com/r/campsych/concerto-platform]. The containers are tagged with a version number, which corresponds to a tag in the source code repository. That means that for any source code tag of XX.YY.ZZ Docker images are created and tagged with XX, XX.YY and XX.YY.ZZ. One could 'freeze' to any of them depending on what is the desired update policy.

The 'latest' tag always points to the latest build on master branch, which is used as a development branch, so we would not recommend using it in production. It is best practice to freeze to a specific minor version tag and update it whenever needed.

Concerto is a standard PHP-based web application that can run on Linux, MacOS and Windows. It can therefore run on any architecture where PHP is supported (x86, x86_64, arm).

Limitations of Docker container provided by us

The Docker container supplied by us only supports x86_64 architecture and contains drivers for MySQL and MariaDB databases. If you require Concerto to run in a container on a different architecture it is possible to create a custom Dockerfile and build a container similarly to how we build it on Travis.

Concerto configuration files can be found in ./app/config and the ones to look for are parameters.yml and parameters_runner.yml. Most values are either self-explanatory or commented.

The most common settings in configuration files can be overridden by environment variables, and these are shown below:

These are only applicable when Concerto is run from within Docker container. For description of PHP_FPM_* ones see https://www.php.net/manual/en/install.fpm.configuration.php. They may be used for performance/resource usage tuning.

When Concerto is running from within a Docker container this is mapped to /data/files and /data/sessions inside of the container respectively. Therefore, if you require any files to survive destruction of the container, then /data needs to be mounted to the filesystem in every container running Concerto.

The following endpoints are available for monitoring purposes:

Concerto stores its logs in ./var/logs/prod.log. When run from within Docker container the output of this file will appear on stdout. 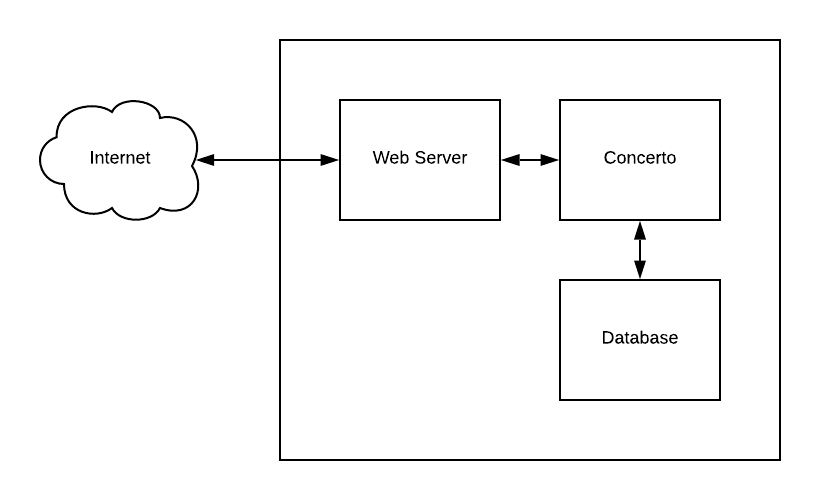 This is the simplest setup from the point of view of infrastructure required. A single server machine would suffice, or you could run the web server and database can run on separate servers. Either way, this configuration is only suitable for small scale and not critical operations.

The reason being that there is a single point of failure in this scenario -- if the machine running Concerto goes down, the whole application goes down with it.

With this configuration, if you need to increase capacity (i.e. to handle more simultaneous users) the usual way forward is to purchase a more powerful machine and re-deploy the application. However, there is a limit to how powerful one machine can be considering the costs tend to rise exponentially after crossing the threshold of what is considered a common hardware. 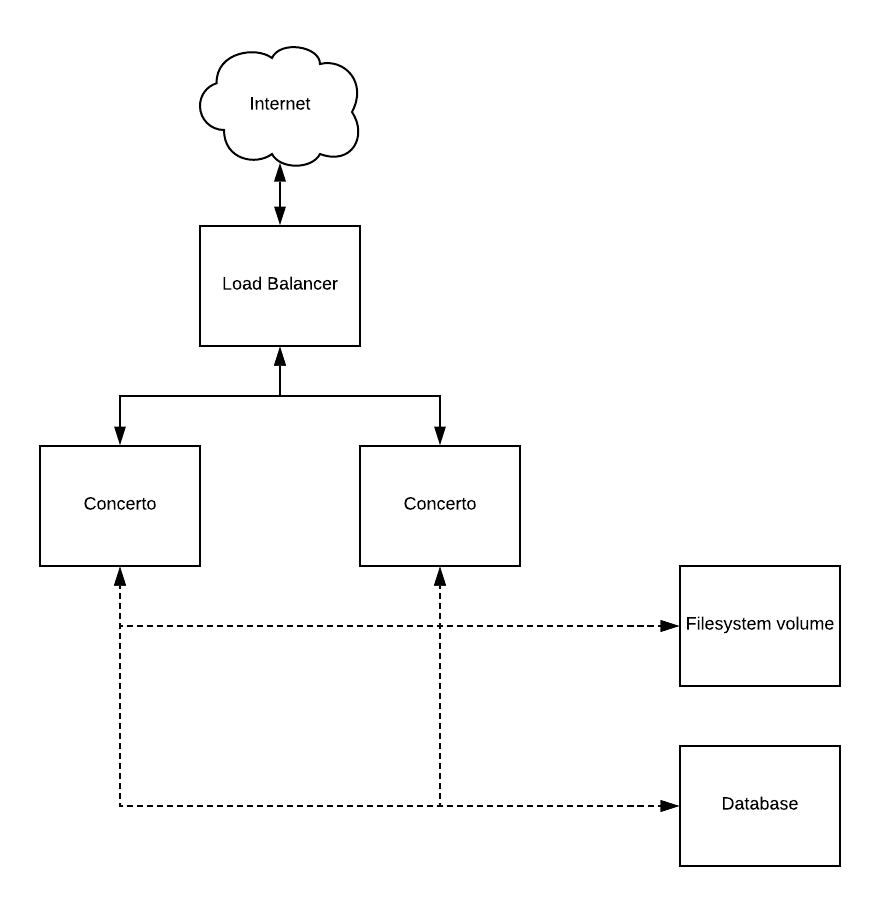 This scenario is a more reliable way to run Concerto because it provides redundant instances of the application in case of failure and opens up the ability to scale up and down on demand, which increases cost-efficiency.

Horizontal scaling can be achieved in many different ways, some of which are described below.

Requires that you purchase or rent the following hardware, at a minimum:

Depending on whether this would be actual or virtual hardware, it could be a slow process to set everything up. In the case of cloud solutions this process is faster because of the automation tools available to automatically create a whole stack of servers. You could use universal tools such as Terraform or tools provided by cloud vendors, e.g. Amazon CloudFormation.

After setting up the infrastructure, the next possible issue is how to actually install and run everything on the machines. This is where it can be helpful to run everything from within Docker containers and/or to use configuration management and automation tools such as Ansible, Chef or Puppet. These management tools can put your servers into the desired state.

Finally, once you have the application is running, it is a good idea to set up monitoring, aggregation of application logs and backups.

Another way to achieve horizontal scaling would be to use server-less solutions. This approach takes servers out of the equation so there is no need to manage their setup or configuration. Instead of configuring machines, the whole operation becomes centred on how many container instances to run and how these containers communicate with each other.

Direct (a.k.a. "bare-metal") installation of Concerto on the host OS can be done on the physical system or in a virtual machine. This is the most traditional way of handling software installations, though it is an outdated approach.

Concerto requires the following things present in the system:

There are many technology stacks that can support running Concerto, the most common being:

These stacks are typical when hosting any PHP-based web applications, so detailed instructions are out of scope of this document but the PHP installation guide is a good starting point [https://www.php.net/manual/en/install.php].

After preparing the environment Concerto files can be downloaded from GitHub [https://github.com/campsych/concerto-platform]. We recommend downloading the contents of a selected version tag, and freezing your project to this version until an update is required. Downloading -- master branch contents is also possible but not recommended as this branch is always in development.

The app needs to be build from downloaded source files. In order to do so:

At this point your source code directory contains all the dependencies needed to run Concerto. NodeJS, Composer and Bower are not needed in your system but may be kept around in an event of an update.

To customize the configuration of Concerto itself please refer to section 2 of this document.

To enable hinting of R functions in the editor inside Concerto run:

To generate a database schema and load initial data:

Web server document root should be mapped to the ./web subdirectory of the application.

If a requested file exists there it should be served. All other requests should be rewritten to ./app.php

Concerto is built upon the Symfony framework, so please refer to Symfony documentation [https://symfony.com/doc/3.4/setup/web_server_configuration.html] for examples.

Optionally, there are some tasks that can be scheduled to be run by a system scheduler (e.g. cron or Windows Task Scheduler).

To support installation of R packages through administration panel, can be run every minute:

To cleanup old sessions, can be run daily:

On Linux, if 'session forking' is enabled ./app./config/parameters_test_runner.yml (it is by default), then a session forking process needs to be running at all times. To start it, run:

Session forking mode tends to lead to better performance on system resources in scenarios where there are many concurrent requests.

Session forking not supported on Windows

Windows does not support the session forking feature of the Concerto test runner component. Therefore in the configuration file ./app./config/parameters_test_runner.yml the session_forking value needs to be set to false and the application will fall back to a less efficient method of spawning sessions for test participants.

Running from a Docker container

This deployment method makes use of a Docker container on the host machine, which contains both the application and its environment.

It's as easy as executing:

This will run Concerto mapping /data volume to /path/to/data in the current working directory. It will try to connect to MySQL database on somehost and will listen on port 80 for connections.

Docker Compose is a tool that allows the user to describe the way docker containers should be run in docker-compose.yml file and then to run them. This tool can be downloaded as described in the Docker documentation [https://docs.docker.com/compose/install/]

In the example file we provide [https://raw.githubusercontent.com/campsych/concerto-platform/master/deploy/docker-compose/docker-compose.yml] two containers are spawned - one for the database and one for Concerto. While the database is isolated, Concerto is configured to communicate with it and to listen to web requests on port 80 of the host machine.

Once this file is downloaded the following command will create and run the containers:

NOTICE: There is the issue with ECS not supporting EFS volumes at the moment. Until this is addressed by AWS team we wouldn't recommend this method for running multiple Concerto containers. 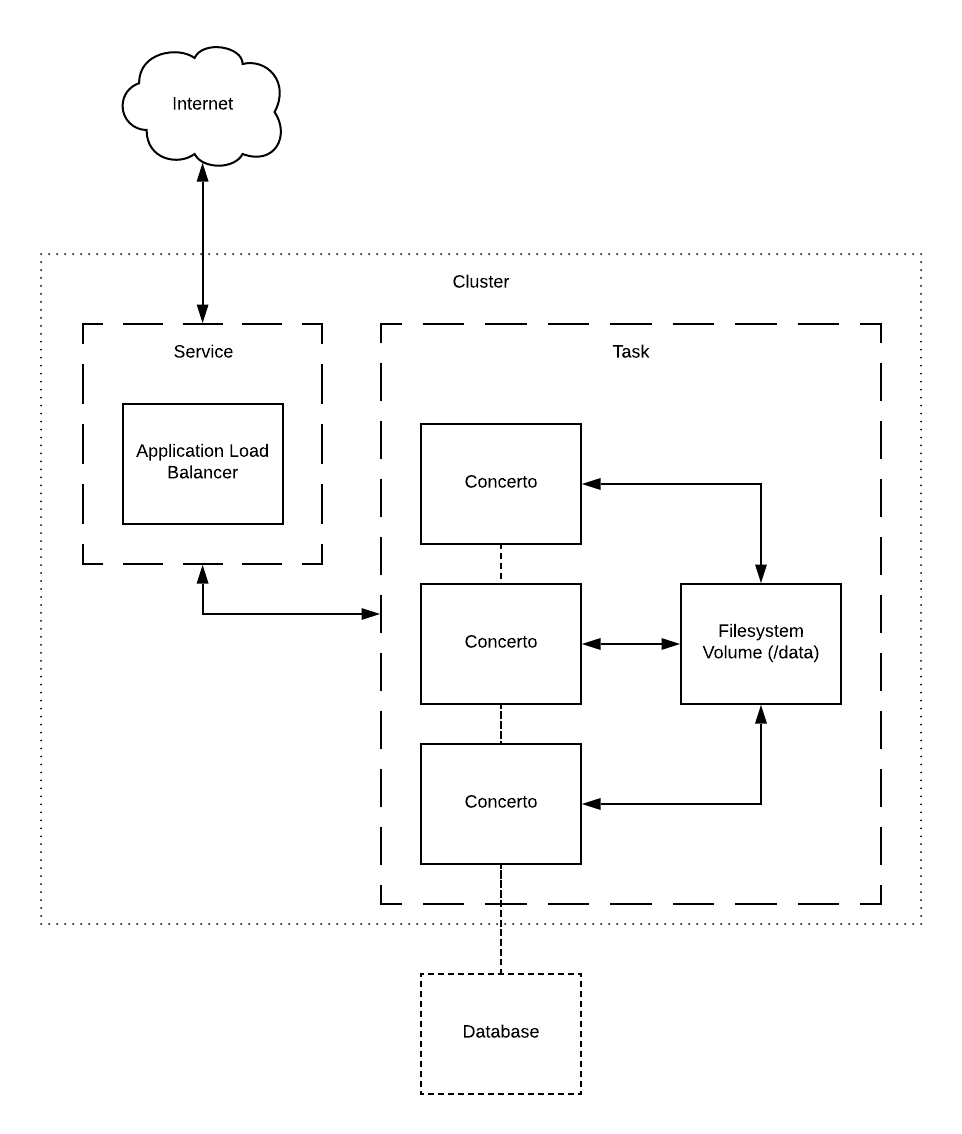 Task Definition needs to be created in the ECS cluster to run single campsych/concert-platform:tag container with /data mapped to filesystem volume and shared between containers.

The other component is a REPLICA type Service with associated Application Load Balancer (ALB) which defines how many tasks to run.

Database can be run in similar manner or using a managed database service such as -- Amazon RDS.

SSL termination can be achieved on ALB, and logging and monitoring can be done through CloudWatch.

There are example JSON file in the repository [https://raw.githubusercontent.com/campsych/concerto-platform/master/deploy/ecs/concerto.json] describing the Task Definition for use with ECS.

This deployment method makes use of Docker container(s) hosted on Kubernetes (K8S) cluster. 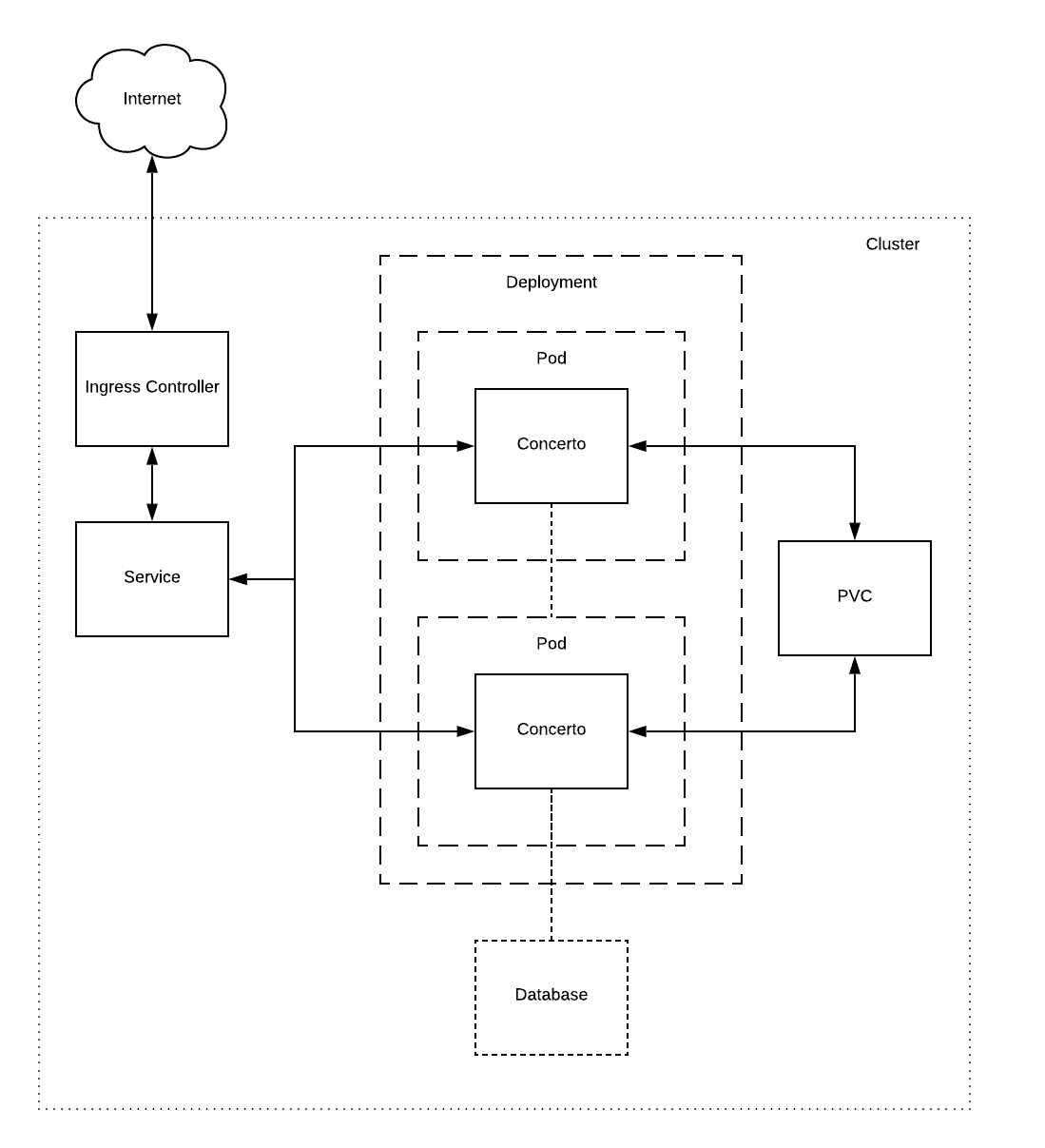 Ingress Controller and Service definitions are fairly standard. Deployment should define one container - campsych/concerto-platform:tag. The /data volume on the container should be mapped to a Persistence Volume Claim (PVC) that will be used for storing user-uploaded files and session data. PVC must support ReadWriteMany access mode, so the volume provisioner needs to support that (i.e. NFS).

Example manifests can be downloaded from our repository [https://raw.githubusercontent.com/campsych/concerto-platform/master/deploy/k8s/concerto.yml]

Below is a list of Helm charts for other tools that may be needed in operation of the cluster:

We maintain some Amazon CloudFormation templates you could use as a starting point for your deployment.