HackerTray is a minimalist Hacker News app for Linux

HackerTray is a simple Hacker News Linux application that lets you view top HN stories in your System Tray. It uses appindicator where available, but provides a Gtk StatusIcon fallback in case AppIndicator is not available.

The inspiration for this came from Hacker Bar, which is Mac-only. 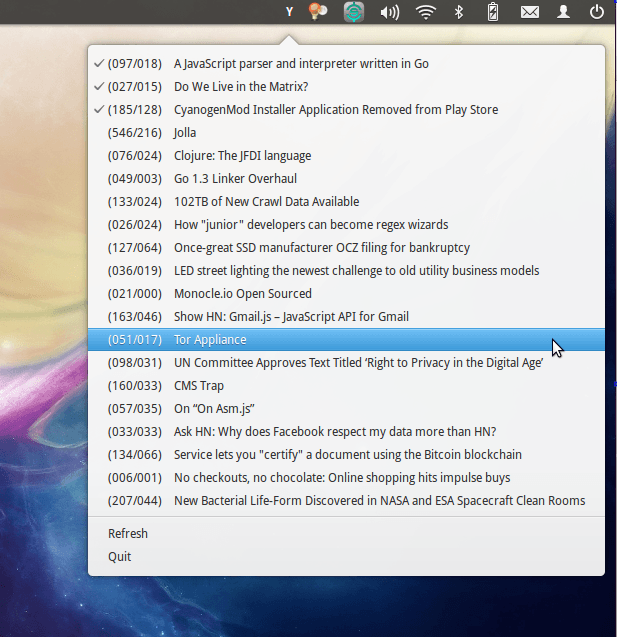 HackerTray is distributed as a python package. Do the following to install:

After that, you can run hackertray from anywhere and it will run. You can now add it to your OS dependent session autostart method. In Ubuntu, you can access it via:

depending on your Ubuntu Version. Or put it in ~/.config/openbox/autostart if you are running OpenBox. Here is how the configuration should look like in Ubuntu and its derivatives.

The latest stable version is

You can check which version you have installed with hackertray --version.

To upgrade, run pip install -U hackertray. In some cases (Ubuntu), you might need to clear the pip cache before upgrading:

HackerTray will automatically check the latest version on startup, and inform you if there is an update available.

HackerTray accepts its various options via the command line. Run hackertray -h to see all options. Currently the following switches are supported:

Note that the --chrome and --firefox options are independent, and can be used together. However, they cannot be specified multiple times (so reading from 2 chrome profiles is not possible).

Where your Profile is stored depends on which version of chrome you are using:

Replace Default with Profile 1, Profile 2 or so on if you use multiple profiles on Chrome. Note that the --chrome option accepts a PROFILE-PATH, not the History file itself. Also note that sometimes ~ might not be set, so you might need to use the complete path (such as /home/nemo/.config/google-chrome/Default/).

The default firefox profile path is ~/.mozilla/firefox/*.default, where * denotes a random 8 digit string. You can also read ~/.mozilla/firefox/profiles.ini to get a list of profiles. Alternatively, just pass auto and HackerTray will pick the default profile automatically.

If the app indicator fails to show in Ubuntu versions, consider installing python-appindicator with

Note that appindicator is no longer supported in non-Ubuntu distros, because it only works on Python2.

To develop on hackertray, or to test out experimental versions, do the following:

On every launch, a request is made to https://pypi.python.org/pypi/hackertray/json to check the latest version.

No more tracking. All data every collected for this project has been deleted. You can see the wiki for what all was collected earlier (Version < 4.0.0).

Licenced under the MIT Licence.

HackerTray is a minimalist Hacker News app for Linux