Shoddy Sense is a cross between Battleship and Guess Who? and is similar to the esoteric board game Sixth Sense.

Shoddy Sense was created by Cathy J. Fitzpatrick in March 2007. It is a client-server multiplayer game.

Shoddy Sense supports games containing arbitrarily many players (minimum two players). At the start of the game, each player selects a 10x10 monochrome image from among a collection of images presented to all players. Each player keeps her or his selection secret.

Gameplay proceeds from one player to the next, one at a time, looping back around to the first player afterward. Each turn, a player can take one of the following two actions:

The goal is to be the last player remaining, by correctly guessing other players' images, or by being the beneficiary of incorrect guesses by other players. 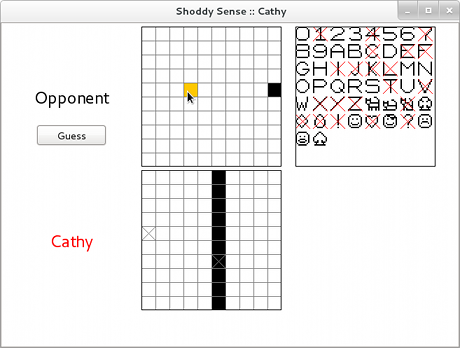 This screenshot is from the perspective of the player "Cathy". The orange highlight in the Opponent's grid shows that Cathy is hovering over that square and would attack it if she clicked.

The array of images to the right of the Opponent's grid is private to Cathy; it is not shown to the Opponent. This grid has no direct effect on the gameplay; the program allows you to toggle whether an image in the grid is crossed off by clicking on it. This allows you to keep track of which images it would be impossible for the Opponent to have, based on what you know so far.

Clicking the "Guess" button under the Opponent's name would allow Cathy to guess at what image the Opponent has. If this guess is correct, she will win the game, but if it is wrong, she would instantly lose.

There are NetBeans project files in the repository. However, NetBeans is not required to build or use the program.

The server parameters are as follows:

The PORT and IMAGE_ARCHIVE parameters are both optional. If omitted, the server will run on port 9944. The default image collection is the raw/ShoddySenseImages.jar archive from the repository, which contains the images from the images directory of the repository.

The client does not accept any command line parameters.

This program is licensed under the GNU Affero General Public License, version 3 or later.