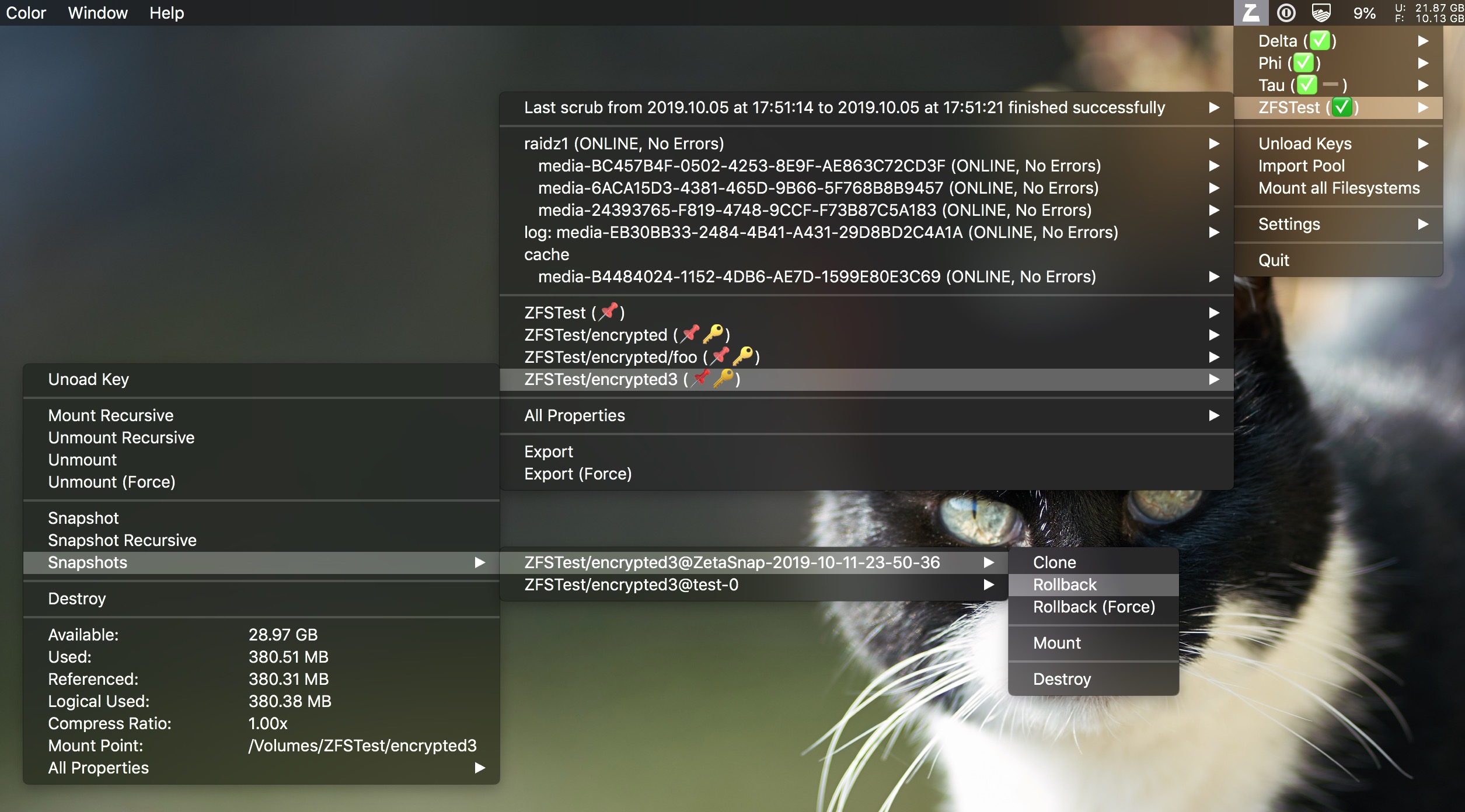 ZetaWatch is a small OS X program that displays the zfs status in the menu bar, similar to what iStat Menus does for other information. It is fairly well tested, but due to the current state of libzfs and libzfs_core, changes will be required until the API stabilizes. ZetaWatch is usually compiled for the latest available ZFS release for Mac OS, and might not be compatible with other releases.

ZetaWatch does not require manual installation. Simply copy it into /Application or where ever else it fits. The bundled helper tool gets installed automatically the first time the program is started. This requires user-authentication.

ZetaWatch communicates with zfs using libzfs.dylib, libzfs_core.dylib , libzpool.dylib and libnvpair.dylib, just like the command line tools do. This gives it all the flexibility of the command line tools, at the cost of having to reimplement functionality that is found in the tools and not the library. And since the libraries are explicitly not meant to provide a stable ABI, ZetaWatch is also closely coupled to the ZFS version it is built and written for.

All the ZFS interaction is wrapped in the ZFSWrapper library. This C++ library isolates the issues mentioned above and provides a more convenient and safe API than the original C interface does. The library is used both by the helper tool and the frontend app. This is the most reusable part of ZetaWatch, and might be split out as separate project later.

The implementation of the helper tool follows apple's EvenBetterAuthorizationSample.

The helper tool can be uninstalled with the uninstall-helper.sh script. This is useful for debugging the installation of the helper, or updating the helper without increasing the bundle version.

These permissions can be manipulated via the security command line program. To inspect the current dataset creation permissions, and switching it to allow this to all users:

Permissions include allow, deny or authenticate-admin.

More detailed information about this topic can be found in the article apples documentation about AuthorizationServices and Managing the Authorization Database in OS X Mavericks.

Official release builds are signed and notarized, and should run without issues even on newer Mac OS X. But there are still issues with authentication reported with the program not being recognized as signed. To verify security manually, the following commands can be used:

Building ZetaWatch requires an apple developer account with DeveloperID signing capabilities, since it uses SMJobBless to run a helper service as root. This service executes actions on behalf of the user, such as mounting, unmounting or loading a key. Notarization is required to create binaries that can be run without without warning on the newest Mac OS X.

The self-updating uses SparkleFramework. Since the newest released sparkle does not yet support hardened runtime, it needs to be compiled manually. Building the "Distribution" target in the Sparkle submodule in release mode is sufficient. The sparkle submodule contains a version that is slimmed down by removing most languages, which saves space. Since ZetaWatch is not localized, this is not a problem. To create a working fork, adjust the public key and update url in the Info.plist file.

Since ZetaWatch directly links to the zfs libraries, it only works if those are compatible. And while Sparkle has built-in support for OS compatibility checking, it doesn't have the same for other dependencies. There is support for custom appcast filtering, to select a suitable version, but since the ZFS version and the ZetaWatch version are kind of orthogonal, this didn't seem fitting.

The chosen solution was to have a ZFS version specific appcast URL, and make ZetaWatch query the appropriate appcast. This allows updating ZetaWatch when the used ZFS version changes, but also have several supported parallel builds. Currently, the only supported ZFS version is 1.9.

This program is copyrighted by me, because I wrote it. This program is licensed under the "3-clause BSD" License. See the LICENSE.md file for details.