Visualizing the transmission between users and base stations!

Handoff is the transition for any given user of signal transmission from one base station to a geographically adjacent base station as the user moves around. In this project, we visualize the process of handoff by generating cars moving around the blocks and connecting them to different base stations based on different policies.

Each node is a 20 * 20 (m^2) square. A block is composed of 24 nodes, whick makes the block size 120 * 80 (m^2). Cars are assummed to be moving on an extremely thin line path between blocks, the path doesn't take up any space. The velocity of the car is 20m/s. In our simulation, we iterate once in a second. The cars move one node, and all the data are calculated and updated every second.

The probability of the entrance follows Poisson distribution

The received power is calculated by the formula below. Read ScienceDirect to dig deeper.

Received Power referred to P, base station referered to B. 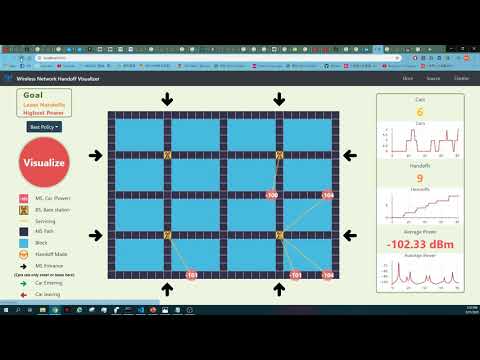 Handoff is the transition for any given user of signal transmission from one base station to a geographically adjacent base station as the user moves around.

Each time a mobile or portable cellular subscriber passes from one cellinto another, the network automatically switches coverage responsibility from one basestation to another. Each base-station transition, as well as the switching processor sequence itself, is called handoff.

The different parameters for each policy are listed below.

The possibility of changing direction when encountering intersection is listed below.

Instead, it will copy all the configuration files and the transitive dependencies (webpack, Babel, ESLint, etc) right into your project so you have full control over them. All of the commands except eject will still work, but they will point to the copied scripts so you can tweak them. At this point you’re on your own.