Modelica library for the simulation of photo voltaic cells and modules

A paper about this library was published at the Modelica Conference 2019.

Modelica library for the simulation of photo voltaic cells, modules and plants. The library provides: The maximum power harvest of a solar pyramid, which may be applicable to the Phileas Rover of the Austrian Space Forum, OEWF, can be investigated by the PhotoVoltaics library. 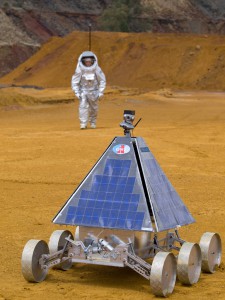 This libray was awarded with the second price at library award of the 13th Modelica Confernce, Regensburg 2019.

The Modelica code of the PhotoVoltaics library, the images and the measurement data of the TGM are released under the BSD 3-clause license.

The package also contains weather data of Vienna retrieved from EnergyPlus. The data of EnergyPlus are distributed under the EnergyPlus Licensing conditions.

Modelica library for the simulation of photo voltaic cells and modules