Note: this repository has been archived. Feel free to look at the code, fork it and use it in any way you like!

As its name suggests, this library is a NodeJS sandbox for executing untrusted Python code in Docker containers.

This section describes how to use the library from your NodeJS application.

The library maintains a fixed-size pool of containers. The containers run a minimalistic API only accessible from the host server, exposing an endpoint to execute code. 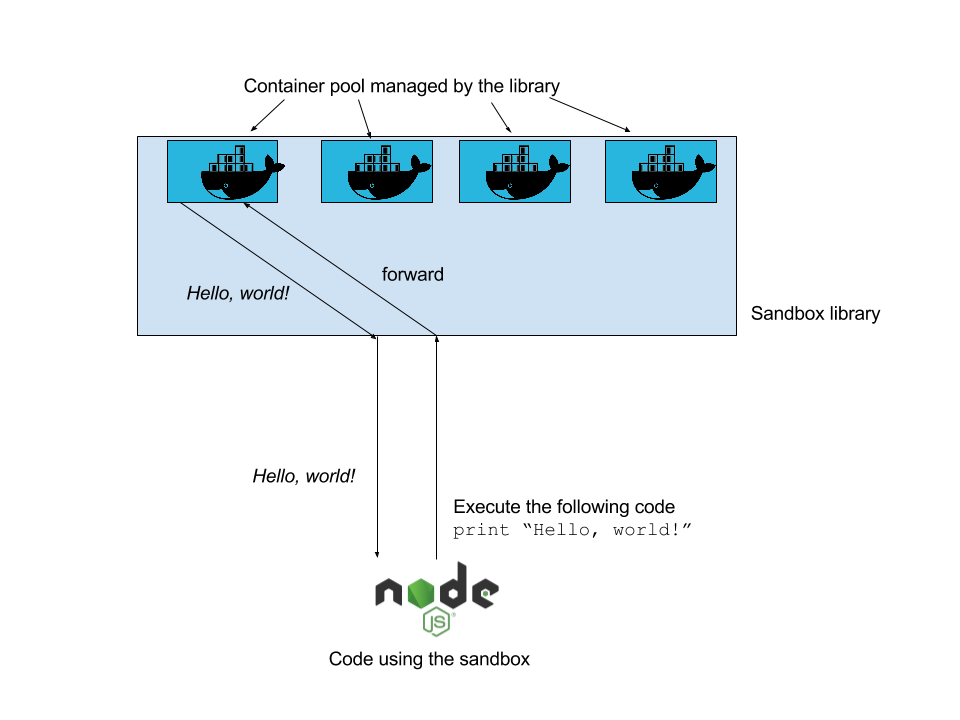 Methods of the Sandbox class

Accepts as a parameter an optional object with the following properties:

This methods initializes the sandbox by creating the pool of Docker containers.

callback is the callback to call when the initialization is completed

This methods runs a python program in the sandbox. param can be:

callback is the callback to be called once the execution is complete. It will be called with 2 parameters:

Please read this section before using blindly the library.

What this library does - and what it does not

This library does not:

Why? Mainly because these are hard to limit correctly using Docker, and because I believe they should be limited on a higher level that this library (e.g. disk quotas, AppArmor/SELinux profiles, firewall rules).

The fact that the untrusted programs only run for a limited amount of time (typically a few seconds) and that the resources it uses are freed afterwards also lowers the risk of abusive resource usage.

Please read carefully the section below if you are interested to use this library in production.

Running it in production

The following are my personal recommendations about what minimal security measures you should follow in order to use this library in a production environment.

Don't run the code that uses this library on your main applications server. I strongly recommend that you keep this code on a separate server exposing an authenticated API, and having no access to any sensitive data.

Yes, yes, I know - you don't have the time nor the desire to implement it. That's why I wrote one for you:

The repository above also includes more specific security guidance (creating a separate user, enabling strict firewall rules, etc.). You can run this API on a separate server (e.g. a AWS instance), and then simply make the appropriate API calls from within your application.

Docker is not the most secure way to run untrusted code.

The isolation provided by Docker is based on LXC containers, which is a feature of the Linux Kernel. Since the host machine and the containers running the untrusted code share the same kernel, security would be compromized if a vulnerability were to be found in the Linux Kernel. The most secure way to run untrusted code is to use traditional virtual machines, which use their own kernel. Unfortunately this is harder to implement efficiently because VMs use significantly more ressources than containers.

Yet, a lot of heavely used websites use Docker containers to execute untrusted code. An example is RemoteInterview.

If your installation uses devicemapper, I advise to configure it to use aufs instead. See https://docs.docker.com/engine/userguide/storagedriver/aufs-driver/#/configure-docker-with-aufs

It has also been reported that the library doesn't work properly on Mac for an unknown reason.

Any issue? Question? Concern? Feel free to open an issue to talk about it or to send me an email at christophe at tafani dash dereeper dot me