A Context-Aware Loss Function for Action Spotting in Soccer Videos Our work is focused on action spotting in soccer videos. We use the SoccerNet dataset openaccess.thecvf.com which is a large scale dataset comprising 500 soccer videos. There are three categories of actions to spot in this dataset: Goals, Cards and Substitutions.

This repository provides all training and testing functions necessary to reproduce the main results of the paper. It also provides a notebook to reproduce two of the figures of the paper: Figure 6 for the three classes (goal, card, substitution) and Figures 7 for different games.

Here is a short video summary of our method: 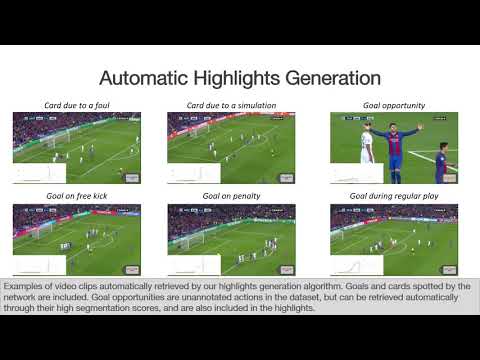 Getting Started (under construction)

The following instructions will help you install the required libraries and the dataset to run the code. The code runs in python 3 and was tested inside a nvidia-docker with the folowing base image: tensorflow:18.02-py3 which can be found following this link: NVIDIA.

Wether you are using the docker image or not, here are the versions of the libraries that are used:

Installing on docker with the provided install bash file

If you are using the nvidia-docker, follow these steps:

At this step, all the required libraries are installed.

To install all required libraries, run the following command lines (might require sudo).

At this step, all the required libraries are installed.

For the installation of the SoccerNet dataset, please follow the instructions on the original author's github: SoccerNet

Training the network (under construction)

The code for training the network is located inside the src folder under the name train.py.

Before running the code, create a folder to save the network weights and the metric saved at each epoch. Then, simply go to the src folder and run the following command:

Feel free to explore the different parameters that are available for this command in the utils/argument_parser.py file. If you wish to use another feature, simply change the -t parameter with whatever feature type available in the SoccerNet dataset.

Inference on the testset (under construction)

The code for testing the network is located inside the src folder under the name test.py.

Note that if you do not want to train the network, we provide some weights that we trained ourself as described in the paper in the weights folder, under the name soccernet_trained_weights.h5

You can now move on to the jupyter notebook in the notebooks folder and run it.

If you used our pre-trained weights for the test, you should get something similar to the following graphs: