See how far and where wastewater travels to the Allegheny County Sanitary Authority (ALCOSAN) treatement facility.

"Flush-It" is small web map application that shows how far and where the wastewater in the Allegheny County Sanitary Authority (ALCOSAN) service area from a specific address goes before getting to the ALCOSAN treatement facility. It uses data and geoprocessing services from 3 Rivers Wet Weather. 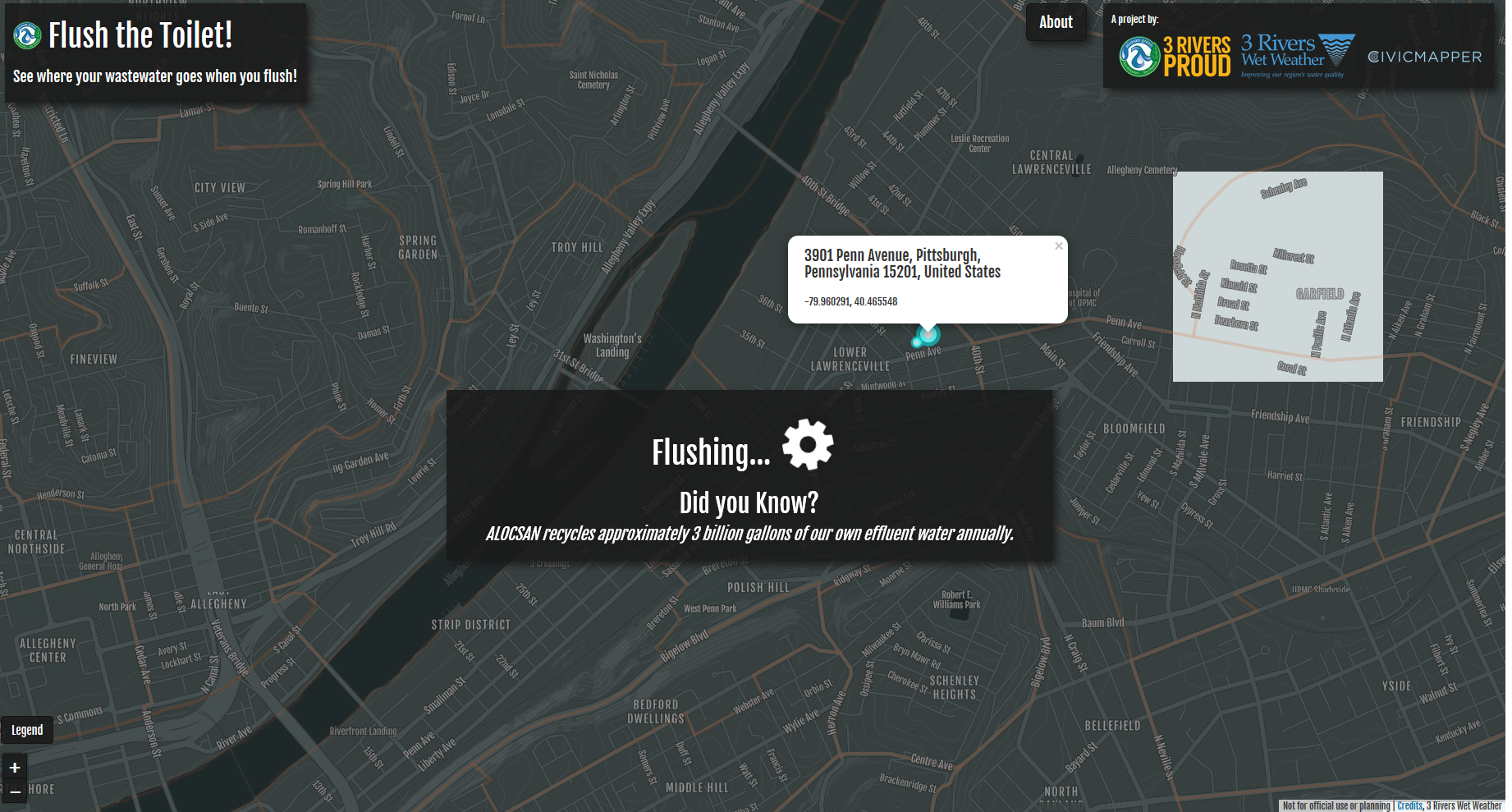 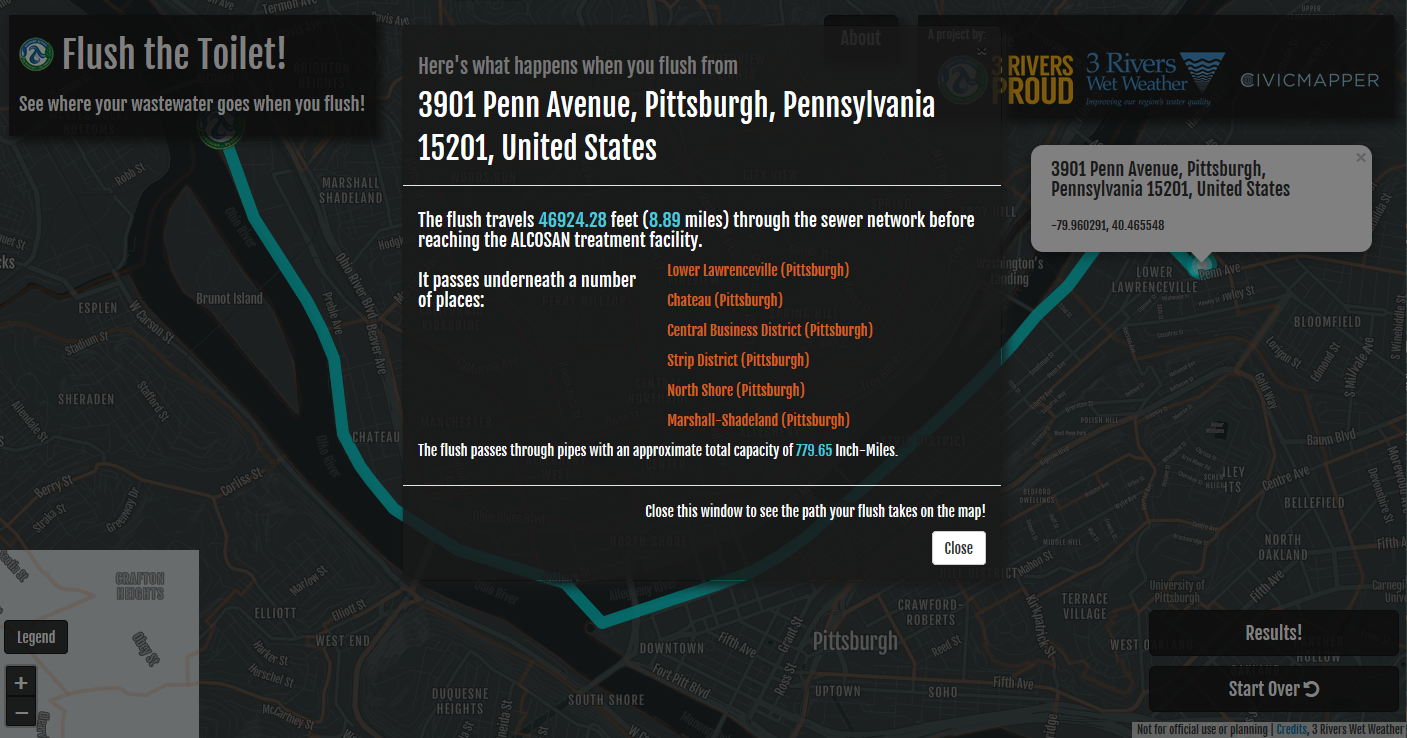 It was first built for ALCOSAN's 2017 Open House, where it was set up as an interactive demo. 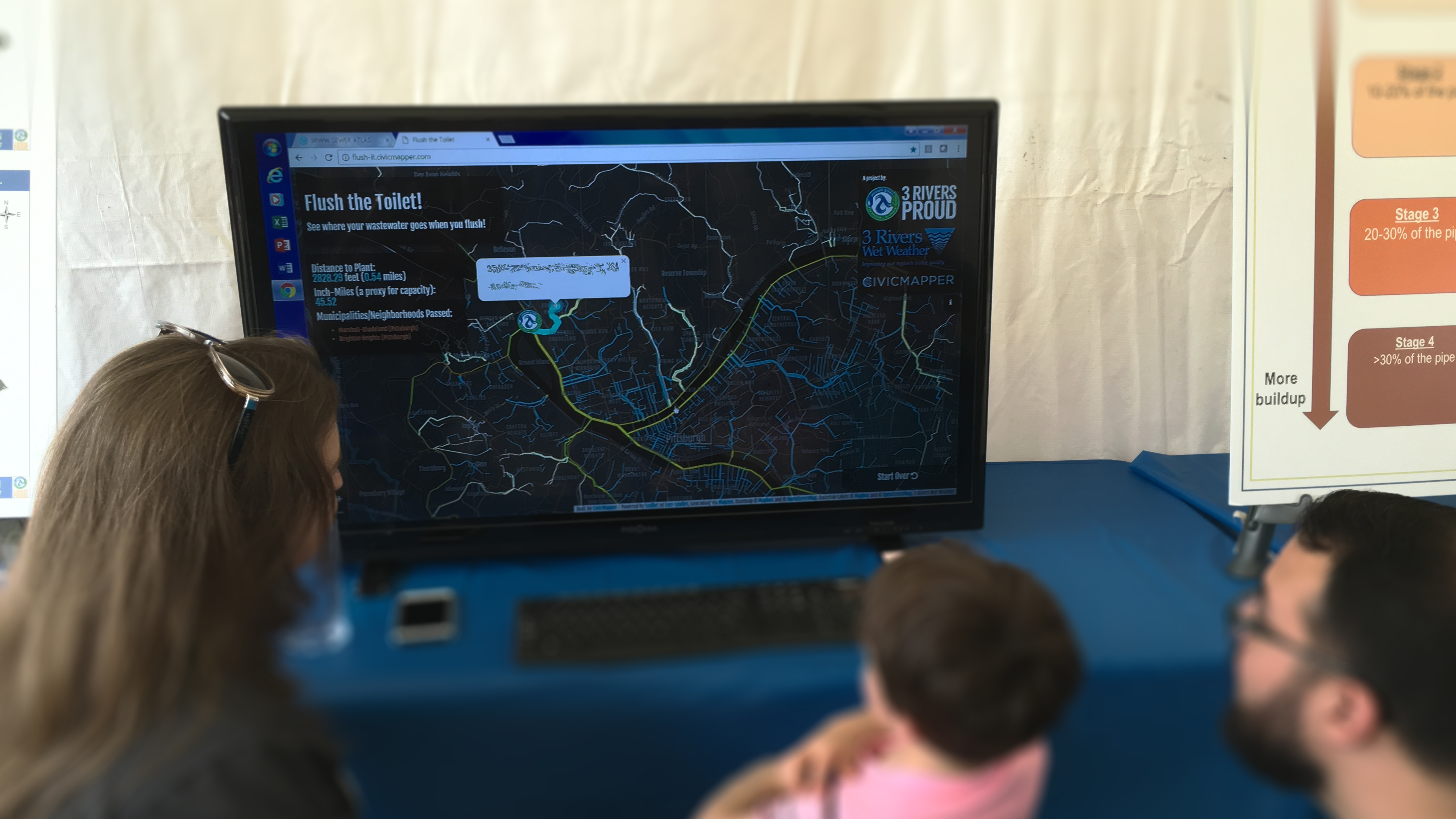 Note: this application requires access to secured web services containing multi-municipal infrastructure data, not all of which is publicly available. We don't yet have a way to offer secured access to those services to the general public. If you're interested in the software behind the site you should still be able to get the basic map running following steps below; however, the sewer network won't appear and the downstream network trace will not work.

"Flush-It" is a Python-Flask web application with a basic Twitter Bootstrap- and jQuery-supported UI. It utilizes LeafletJS and Esri-Leaflet for web mapping. The base map (not including the sewer data) comes from OpenStreetMap via Mapbox. Mapbox provides geocoding functionality. Some client-side geoprocessing is performed with Mapbox's TurfJS library.

We're using a combination of pipenv and npm for package management (for python and javascript, respectively); GulpJS is handling client-side site builds and will spin up a development environment for you.

We developed this in a Windows environment; it should also work in POSIX environments. If you want to attempt developing on this in Windows, we strongly recommend:

This assumes you already have working Python 3+ (w/ pip) and working NodeJS (w/ npm) installations locally, and that you have no problem running those things from the command line (see above)

In a shell in the root of the repository, run the following commands to setup the python environment.

Then (still in the shell in the root of the repository), for client-side javascript libraries:

(2018/03/06) Currently a bug in the way NPM's writes the package.json and package-lock.json files tends to remove one GitHub-based dependency, Leaflet-Control-Custom, from the dependency list if any other packages are installed/upgraded. The workaround for now is to re-install that dependency after any other installations/upgrades:

To get a development environment running, run these commands in one console:

Shutting down the development environment

When you're ready to stop developing, ctrl-c will shut the development server both the python-flask dev server and the Gulp watch/build/synchronization process.

In the console running pipenv shell, type exit to shut down the python virtual environment.

Build the site with gulp build.

The site is currently being deployed to PythonAnywhere.

When deploying you'll need to add credentials for the ArcGIS Server services to the config.py file (or rewrite that to pull those things from your deployment environment - whatever you like)

In the config file, the *_CLIENT_TYPE parameters for ArcGIS Server token generation must be changed from requestip to referrer in production.

See how far and where wastewater travels to the Allegheny County Sanitary Authority (ALCOSAN) treatement facility.