It turns recently starred repos from a Github account into bookmarks in Pinboard. 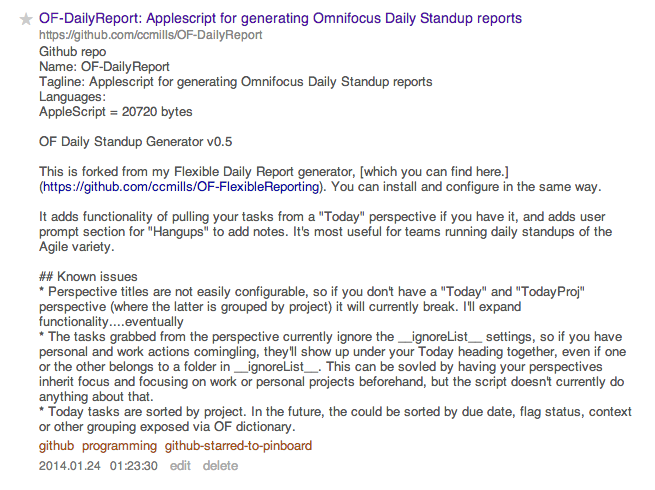 That is, it sets the bookmark title to the repo name followed by the short, one-liner repo description. It lists the languages used in the repo in order of bytes, too. Just for you. Because I like you. It also lists the as much of the readme file as will fit in Pinboard's description field.

Get your Github OAuth token from here.

Get your Pinboard API token from here.

By default, if you have an existing bookmark with the same URl as a starred repo, this script will change that bookmark to match the above styling. If you wish to change this, set the replace variable to no. Note that even if replace is yes, the datetime on existing bookmarks will not be altered by this script.

The bookmarks will be tagged with the terms in the tags variable.

On first run, it creates a config file with the same base filename as you named this script. (If you didn't rename the script, it'll be called exporter.config) You can uncomment and fill in gh_username, gh_token, and pb_token if you do not want to create a config file.

It works for any number of repos. Thanks, jdherg!

API calls are limited to 4103 characters which really cuts down on how much of the readme file is included in the description. If anybody has a good workaround for this, please submit a pull request.