sneaker is a utility for storing sensitive information on AWS using S3 and the Key Management Service (KMS) to provide durability, confidentiality, and integrity.

Secrets are stored on S3, encrypted with AES-256-GCM and single-use, KMS-generated data keys.

This project has not been reviewed by security professionals. Its internals, data formats, and interfaces may change at any time in the future without warning.

sneaker requires access to AWS APIs, which means it needs a set of AWS credentials. It will look for the AWS_ACCESS_KEY_ID and AWS_SECRET_ACCESS_KEY environment variables, the default credentials profile (e.g. ~/.aws/credentials), and finally any instance profile credentials for systems running on EC2 instances.

In general, if the aws command works, sneaker should work as well.

If you have multi-factor authentication enabled for your AWS account (and you should), you may need to provide a token via the AWS_SESSION_TOKEN environment variable.

If you're using IAM instance roles, you may need to set the AWS_REGION environment variable to the AWS region you're using (e.g. us-east-1).

Setting Up The Environment

You can create a KMS key via the AWS Console or using a recent version of aws. When you've created the key, store its ID (a UUID) in the SNEAKER_MASTER_KEY environment variable:

As with the key, you can create an S3 bucket via the AWS Console or with the aws command. You can either use a dedicated bucket or use a directory in a common bucket, but we recommend you do two things:

Once you're done, set the SNEAKER_S3_PATH environment variable to the location where secrets should be stored (e.g. s3://bucket1/secrets/):

(That will store the encrypted secrets in the bucket bucket1 prefixed with secrets/.)

Once you've got sneaker configured, try listing the secrets:

This will print out a table of all uploaded secrets. You haven't uploaded anything yet, so the table will be empty.

Let's create an example secret file and upload it:

This will use KMS to generate a random, 256-bit data key, encrypt the secret with AES-256-GCM, and upload the encrypted secret and an encrypted copy of the data key to S3. Running sneaker ls should display a table with the file in it.

If your file is so sensitive it shouldn't be stored on disk, using - instead of a filename will make sneaker read the data from STDIN.

Finally, you can delete the file:

To install a secret on a machine, you'll need to pack them into a tarball:

This will perform the following steps:

Using - as the output path will make sneaker write the data to STDOUT.

The result is safe to store and transmit -- only those with access to the Decrypt operation of the KMS key being used will be able to decrypt the data.

You can also use a different KMS key than your SNEAKER_MASTER_KEY when packing secrets by using the --key-id flag:

This allows you to unpack your secrets in environments which don't have access to the key used to store your secrets.

To unpack the secrets, run the following:

This will perform the following steps:

KMS supports the notion of an Encryption Context: semi-structured data used in the encryption of data which is then required for resulting decryption operations to be successful.

sneaker uses the SNEAKER_MASTER_CONTEXT environment variable as the default encryption context for the secrets which are stored in S3. In addition, sneaker also includes the full S3 path, including bucket and prefix. Because of this, secrets in S3 cannot be renamed; they can only be deleted and re-uploaded.

Note: there is currently no way to change the contents of SNEAKER_MASTER_CONTEXT in place. If you want to change it, you'll need to download all your secrets and re-upload them with the new context.

For packing and unpacking secrets you can specify a different encryption context on the command line:

That same context (hostname=web1.example.com,version=20) must be used to unpack those secrets:

All data in the encryption contexts are logged via CloudTrail, which allows you to track when and where particular secrets are packed and unpacked.

A common maintenance task is key rotation. To rotate the data keys used to encrypt the secrets, run sneaker rotate. It will download and decrypt each secret, generate a new data key, and upload a re-encrypted copy.

To rotate the KMS key used for each secret, simply specify a different SNEAKER_MASTER_KEY and run sneaker rotate.

All data is encrypted with AES-256-GCM using random KMS data keys and random nonces. The ID of the KMS key is used as authenticated data.

The final result is the concatentation of the following: 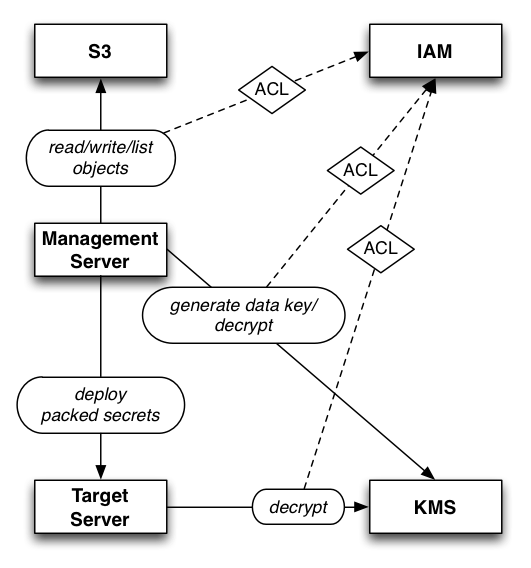 The threat model is defined in terms of what each possible attacker can achieve. The list is intended to be exhaustive, i.e. if an entity can do something that is not listed here then that should count as a break of Sneaker.

Threats From A KMS Compromise

An attacker who suborns KMS can:

Threats From An S3 Compromise:

An attacker who suborns S3 can:

Threats From Seizure Or Compromise Of The User's Computer