This project is currently unmaintained

acbuild was originally created to be the tool used to build AppC images. Due to the introduction of the Open Container Initiative, development on AppC was officially suspended in November, 2016. While acbuild has the ability to also produce OCI images, it is not the only tool capable of doing so. In its current state, acbuild is not currently maintained. If you wish to become a maintainer of acbuild, feel free to start contributing and ask for direct commit access via the issue/PR tracker.

For those looking for an OCI image manipulation tool that is actively maintained, umoci or buildah might be able to fill the role.

acbuild is a command line utility to build and modify container images.

It is intended to provide an image build workflow independent of specific formats; currently, it can output the following types of container images: 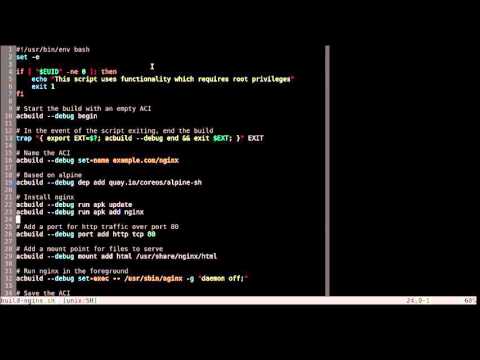 We needed a powerful tool for constructing and manipulating container images that made it easy to iteratively build containers, both from scratch and atop existing images. We wanted that tool to integrate well with Unix mechanisms like the shell and Makefiles so it would fit seamlessly into well-known administrator and developer workflows.

acbuild can only be run on a Linux system, and has only been tested on the amd64 architecture.

For trying out acbuild on Mac OS X, it's recommended to use Vagrant. Instructions on how to do this are a little further down in this document.

acbuild requires a handful of commands be available on the system on which it's run:

Additionally systemd-nspawn is required to use the default engine for acbuild run. Thus on Ubuntu the systemd-container package needs to be installed.

The easiest way to get acbuild is to download one of the releases from GitHub.

The other way to get acbuild is to build it from source. Building from source requires Go 1.5+.

and put the following lines at the end of the file:

If rkt is installed on the system, acbuild can also be built inside of a rkt container with the following command:

For users with Vagrant 1.5.x or greater, there's a provided Vagrantfile that can quickly get you set up with a Linux VM that has both acbuild and rkt. The following steps will grab acbuild, set up the machine, and ssh into it.

Documentation about acbuild and many of its commands is available in the Documentation directory in this repository.

Check out the examples directory for some common applications being packaged into ACIs with acbuild.