an evented, objective, hobby programming language with novel features; written in and compiled to Perl

By evented, I mean that all functions are implemented as events, each of which can have any number of responders and return values. By objective, I mean that all values in Ferret are objects. By hobby, I mean that I know it will never be used by any project to be taken seriously. 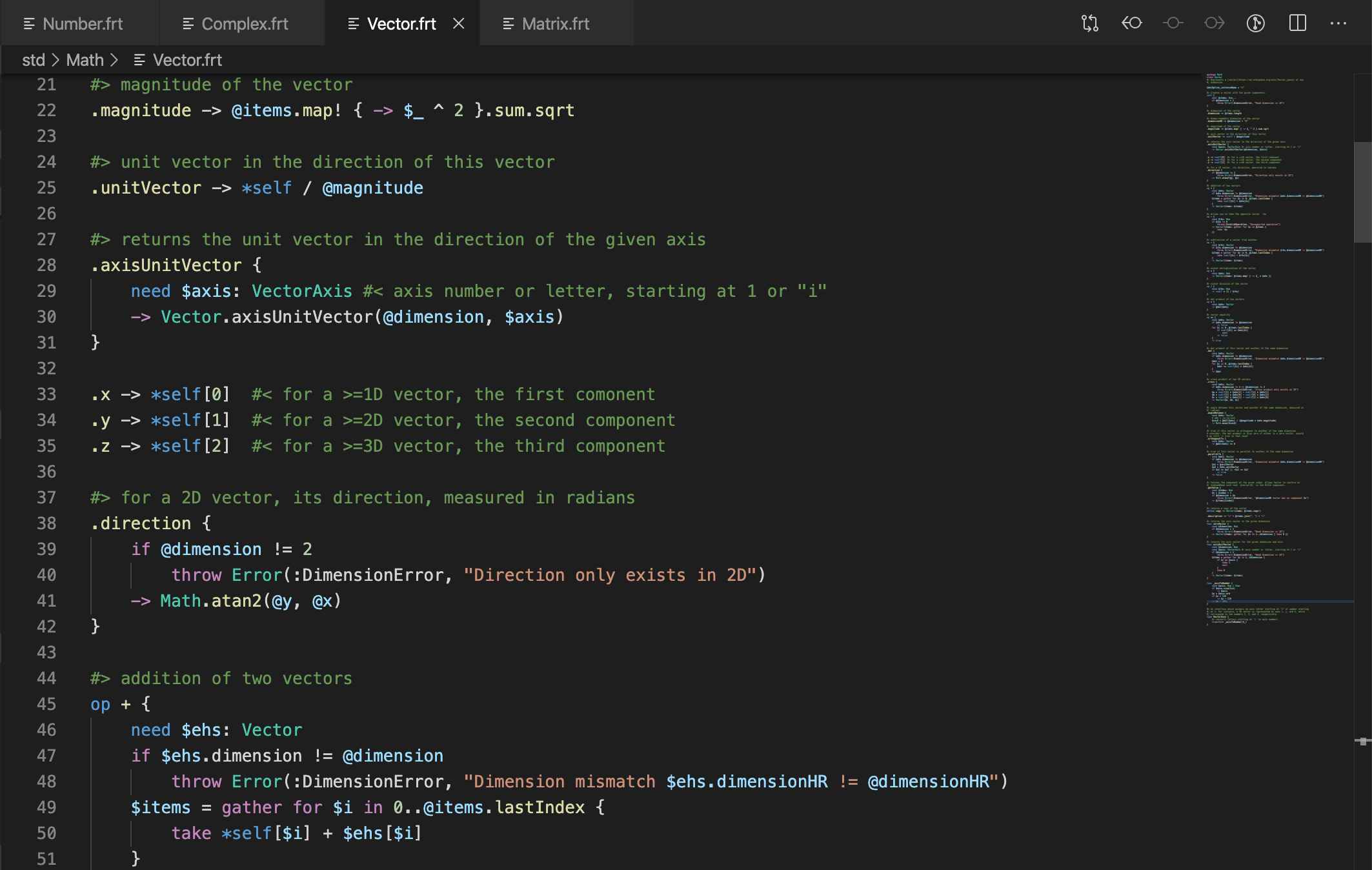 All functions and methods in Ferret are implemented as events.

This means that for every named function or method, any number of callbacks may be hidden behind it, each of which accepts its own arguments and spits out its own return values. This makes it really easy to extend existing code without breaking things.

Ferret features a unique inheritance system in which all values are objects which can inherit from any number of other objects.

Because Ferret objects can inherit from any objects, a class is not required for inheritance. Below is an example of basic inheritance without a class.

Ferret currently compiles exclusively to Perl, a high-level language. It might therefore be classified as a very-high-level language (VHLL). In other words, Ferret has many novel features, often at the cost of considerable overhead.

While Ferret is a compiled language, its compiler and runtime are both written in an interpreted language. This allows for runtime compilation and evaluation.

Ferret requires the following Perl modules from the CPAN:

After cloning the repository, Ferret requires a configuration. It's truly as simple as specifying where on your system the repository exists.

Copy ferret.conf.example to /etc/ferret.conf. In it, set the $ferret_root variable to the absolute path of this repository.

Make sure that all users have read permission.

After that, try running the compiler from the repository root directory to compile the standard library.

If you cannot write to /etc/ferret.conf, you can store your configuration elsewhere. Just set the environment variable $FERRET_CONFIG to the absolute path of your configuration file. To set it semi-permanently, add it to your ~/.bash_profile or the like.

Once you have the compiler working, you're ready to write some code. The easiest way is to make a sandbox directory within this repository tree. Name your files with .frt. Then compile.

Compile with the ferret executable, passing file paths as arguments. If no file paths are provided, it searches the current directory and all subdirectories for .frt and .frtdoc files. Unchanged files are ignored. See ./ferret -h for all flags. The entire standard library is compiled like so:

After updating the repository, the compiler may have changed. You might want to run ferret with the -n flag to force all source files to recompile.

Run files with the -r flag:

You can also run Ferret files directly if they are executable and include the hashbang #!/usr/bin/env ferret -r (assuming the ferret bin is in your PATH):

There are bugs. There is much work to be done. Some problematic scenarios are not handled properly or do not provide helpful error messages. But there are things you can try.

If you encounter an error while compiling, see troubleshooting in Compilation.

Otherwise, head to #k on irc.notroll.net and start complaining.

an evented, objective, hobby programming language with novel features; written in and compiled to Perl