A simple and visual static web server with collaboration features.

Fenix is a desktop web server for developers. Check out fenixwebserver.com for details. There are some YouTube videos of the old version. We do not yet have any screencasts of v3.0.0, but a live demo for Bleeding Edge Web was recorded during the early development days.

If you're using Fenix, we'd love your feedback!

Fenix 3.0.0 release candidate 13 for macOS and Windows is available.

UPDATE 9/18/19 Fenix 3 is done, for both Mac and Windows. We had to cut a few things, like automatic updates (it will prompt you to download a new version when new updates are available). Unfortunately, the tools for updating an Electron app aren't really sufficient enough to support some of the new features (like the built-in CLI, updating the PATH, etc). We are working on a more streamlined autoupdate experience, which will power future versions.

Fenix 3 is just one of several things we've been working on under the Author.io brand to make writing software a more efficient/enjoyable process. Since there are several efforts underway (and only 2 of us working on everything), we're also spending time to turn Author.io into a full-fledged company. Don't worry, Fenix will still be free... we're exploring other monetization options to support continued development, as well as sponsorship for the many open source efforts we're puring time into.

NGN, Chassis, and the web components were all used to build Fenix 3 and the associated websites. NGN has been battle-tested with clients like TopGolf, Aunt Bertha, and several enterprises. We're actively working on Metadoc to produce better documentation for the Fenix 3 API libraries.

For those we invited to the early beta, thank you. Your feedback has been invaluable. I'd also like to publicly thank those of you who have donated. Your support means the world to us!

We have some exciting new things coming in 3.0.0:

The plugin system is only for internal use. We hope to expand this for developer use in a later edition.

There have been several requests for things like gzip compression, ETags, etc. These features don't typically make sense for the simplest form of local development, but modern UI development "done right" requires a little more emphasis on networking/transmission. These features become very useful when testing and troubleshooting, so we've made it possible to turn them on/off for each server. We're also extending the Fenix API to manage these things programmatically, and we anticipate releasing a gulp/grunt plugin to help automate local testing workflows.

Due to the unique and complex nature of some of these features, we are moving them into a separate project. They will likely resurface in 3.1.x or 3.2.x edition (possibly for free).

The request browser will be released as it's own separate app, so it won't be in Fenix 3.0.0. I always felt it was a useful tool, and survey results agree... but it also doesn't fit in as well with the original scope of Fenix. Moving it to it's own project will help it get the attention it needs to be truly awesome.

Finally, we're going "open core". Most of the features above will be free, but more advanced features are slated for a commercial release. As much has we'd like to make this free, devlopment has already grown into a full time effort. 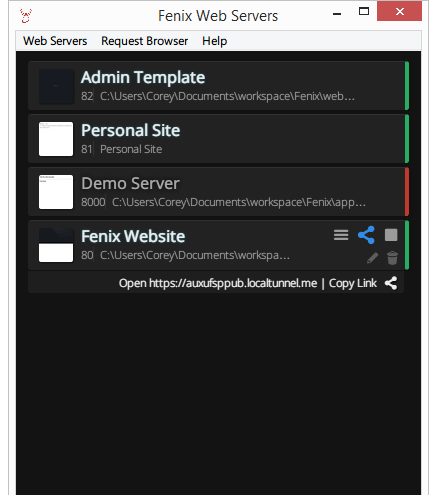 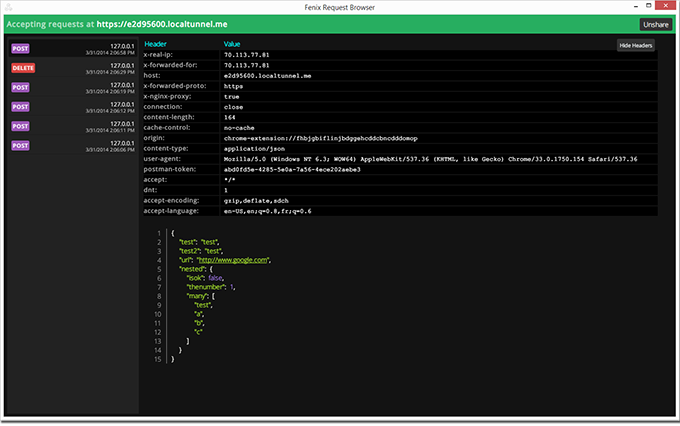 The wiki has additional information about how Fenix works, how to hack on it, and how to use it on other platforms. The release history has older versions and a changelog.

Making a donation will go towards the development of Fenix. At the moment, I'd love to reach a simple goal of $100 in annual contributions so I can obtain an Apple Developer license for Fenix... which is the only application I'm distributing on Mac. This would help prevent the "Cannot install from unidentified developer" annoyance some OSX Mavericks users experience. Other contributions would go towards future efforts like hosting a public SSH tunnel (to take some load off localtunnel.me) and new feature development.

Support OSS Development via Stripe or Become a Patron

Fenix 2.0 is available under the GPL license.

A simple and visual static web server with collaboration features.