This README provides a pretty good overview of what node-mac has to offer, but better documentation is now available at the node-mac documentation portal.

This is a standalone module, originally designed for internal use in NGN. However; it is capable of providing the same features for Node.JS scripts independently of NGN. 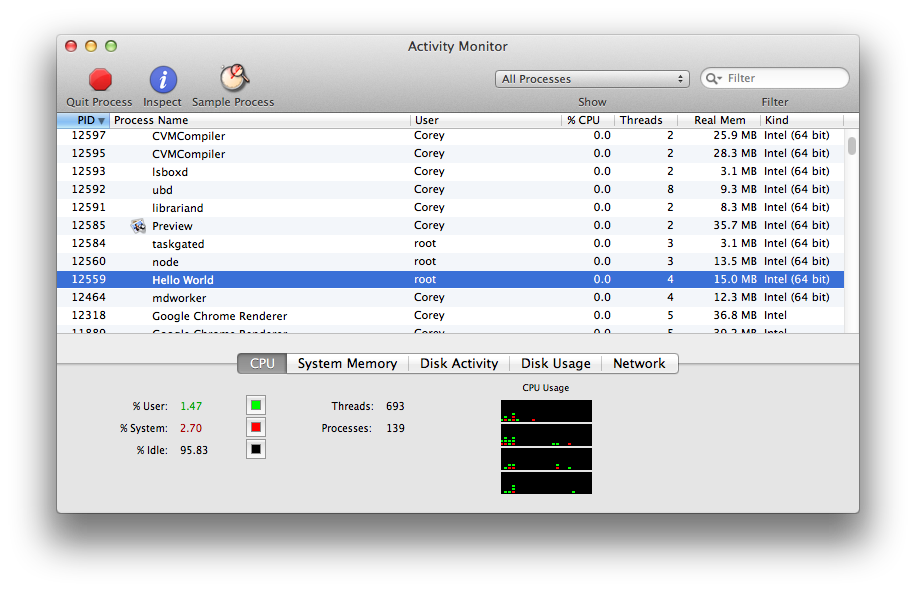 To start, install node-mac via:

node-mac is a utility for creating/managing Node.js scripts as OSX daemons. Please note that like all OSX daemons, creating one requires sudo/root privileges. To create a service with node-mac, prepare a script like:

The code above creates a new Service object, providing a pretty name and description. The script attribute identifies the Node.js script that should run as a service. Upon running this, the script will be visible from the Activity Monitor.

In the example above, the script listens for the install event. Since this event is fired when a service installation is complete, it is safe to start the service.

Services created by node-mac are similar to most other services running on OSX. They can be stopped from the Activity Monitor and make logs available in the Console app.

Sometimes you may want to provide a service with static data, passed in on creation of the service. You can do this by setting environment variables in the service config, as shown below:

You can also supply an array to set multiple environment variables:

Cleaning Up: Uninstall a Service

Uninstalling a previously created service is syntactically similar to installation.

The uninstall process only removes process-specific files. It does NOT delete your Node.js script, but it will remove the logs! This process also removes the plist file for the service.

The built-in service recovery for OSX services is fairly limited and cannot easily be configured from code. Therefore, node-mac creates a wrapper around the Node.js script. This wrapper is responsible for restarting a failed service in an intelligent and configurable manner. For example, if your script crashes due to an unknown error, node-mac will attempt to restart it. By default, this occurs every second. However; if the script has a fatal flaw that makes it crash repeatedly, it adds unnecessary overhead to the system. node-mac handles this by increasing the time interval between restarts and capping the maximum number of restarts.

Using the default settings, node-mac adds 25% to the wait interval each time it needs to restart the script. With the default setting (1 second), the first restart attempt occurs after one second. The second occurs after 1.25 seconds. The third after 1.56 seconds (1.25 increased by 25%) and so on. Both the initial wait time and the growth rate are configuration options that can be passed to a new Service. For example:

In this example, the wait period will start at 2 seconds and increase by 50%. So, the second attempt would be 3 seconds later while the fourth would be 4.5 seconds later.

Repetitive recycling could potentially go on forever with a bad script. To handle these situations, node-mac supports two kinds of caps. Using maxRetries will cap the maximum total number of times the service restarts itself before it kills the process. By default, this is unlimited. Setting it to 3 would tell the process to stop restarting itself (i.e. leave the dead process alone) after it tries to restart it 3 times.

Both of these configuration options can be set, just like wait or grow.

Finally, an attribute called abortOnError can be set to true if you want your script to not restart at all when it exits with an error.

How Services Are Made

node-mac uses the launchd utility to create a unique process for each Node.js script deployed as a service. A plist file is created in /Library/LaunchDaemons by default. Additionally, two log files are generated in /Library/Logs/<name> for general output and error logging. 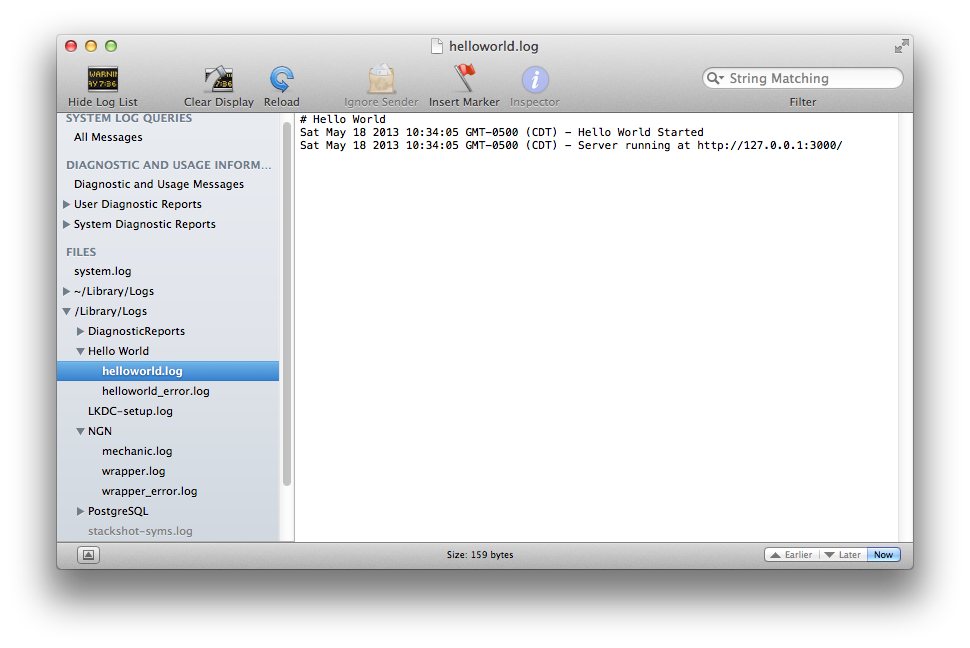 Services created with node-mac have two event logs that can be viewed through the Console app. A log source named myappname.log provides basic logging for the service. It can be used to see when the entire service starts/stops. A second log, named myappname_error.log stores error output.

By default, any console.log, console.warn, console.error or other output will be made available in one of these two files.

Permission is hereby granted, free of charge, to any person obtaining a copy of this software and associated documentation files (the 'Software'), to deal in the Software without restriction, including without limitation the rights to use, copy, modify, merge, publish, distribute, sublicense, and/or sell copies of the Software, and to permit persons to whom the Software is furnished to do so, subject to the following conditions:

THE SOFTWARE IS PROVIDED 'AS IS', WITHOUT WARRANTY OF ANY KIND, EXPRESS OR IMPLIED, INCLUDING BUT NOT LIMITED TO THE WARRANTIES OF MERCHANTABILITY, FITNESS FOR A PARTICULAR PURPOSE AND NONINFRINGEMENT. IN NO EVENT SHALL THE AUTHORS OR COPYRIGHT HOLDERS BE LIABLE FOR ANY CLAIM, DAMAGES OR OTHER LIABILITY, WHETHER IN AN ACTION OF CONTRACT, TORT OR OTHERWISE, ARISING FROM, OUT OF OR IN CONNECTION WITH THE SOFTWARE OR THE USE OR OTHER DEALINGS IN THE SOFTWARE.