Given an initial, labeled batch of data, we aim to train a system that is capable of classifying a stream of data and recognizing new classes it has not yet seen.

We aim to solve this problem by training an "embedding" neural net to embed the input data points in a low dimensional space (that is, do dimension reduction from the high number of input features to a point in a low-dimensional Euclidean space) in a way that points representing inputs belonging to the same class are close to each other, and far from the points related to other classes.

We do this by adding a "clustering head" to the neural net, which learns the centers of clusters related to each known class. The embedding net and the clustering head are trained together on the labeled data.

Then, when the system is used to classify the stream of data, the already trained embedding network is used to embed each incoming data point in the low-dimensional space, where similar inputs will hopefully be close to each other, and dissimilar inputs be far from each other, making it possible to use classic clustering techniques to identify brand new clusters arising from a new class of inputs the system has not previously seen (and better than by using a linear mapping e.g. PCA).

The system is implemented in Torch/nn, using a modified nn.Euclidean as the clustering layer, and nn.HingeEmbeddingCriterion as the criterion. This combination implements the idea perfectly, as this criterion will attract a point to its cluster center with a constant force regardless of the distance, but will only repel a point from other cluster centers up to a set distance.

I needed to modify the nn.Euclidean layer to ensure that the initial cluster centers are sufficiently far from each other. This was essential in getting the network able to learn the data.

Once the network correctly predicted at least 93% of the test data, the embedding network was used to map some (10%) of the images for digits 3 and 7 into the 3D space, along with a sample (1%) of images from the other 8 classes. Please see the result below. 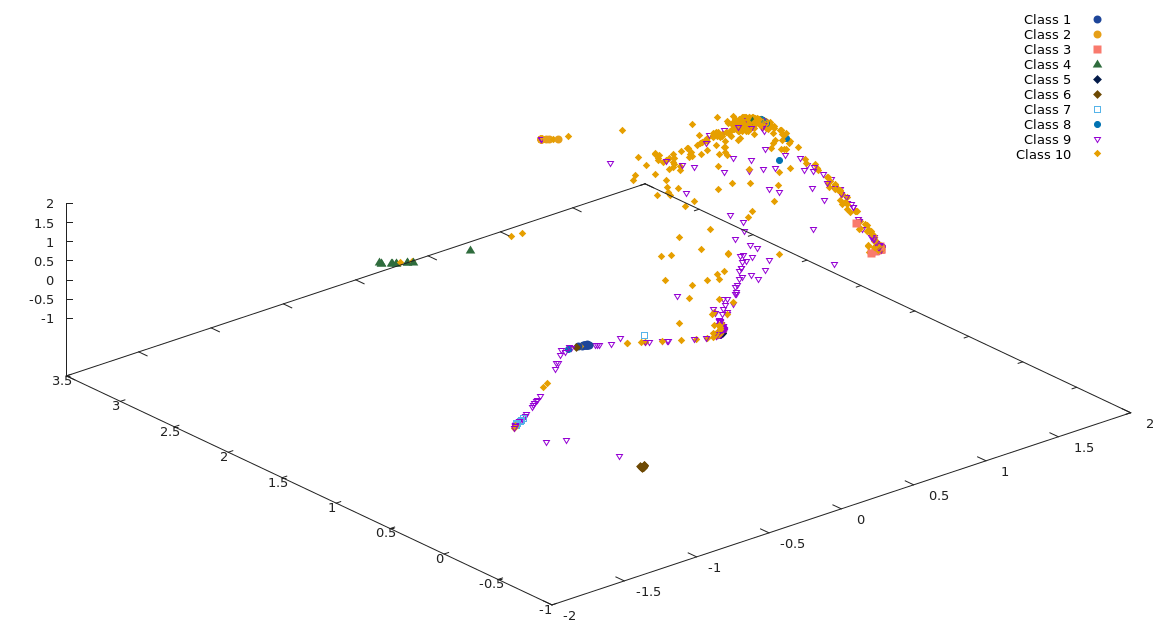 It looks quite promising that the images for 3 (purple triangle) are largely separated from those for 7 (orange diamond). Unfortunately, they are not localized in a spherical cluster, but spread out touching other clusters. Training on more clusters may help by crowding the 3D space, as well as training the network on inputs that do not need to be collected into a cluster, but moved away from existing clusters. While this experiment uses images, the same clustering idea could be used with other types of data, including text, with an LSTM/GRU embedding network.