An implementation of "superloops" around recurrent neural networks (RNNs).

A "superloop" is an extra loop that connects the output of the RNN to its input in the next timestep via one or more external systems ("X"). 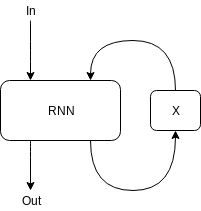 The external system can implement a special type of memory (derivable stack memory, addressable memory, etc.), an attention system, or other enhancement.

The framework implements the RNN and the superloop by unrolling both. The diagram below illustrates one RNN unit (LSTM, GRU, etc.) and how it is unrolled in time.

With two units (or, which is equivalent, layers of units) one after the other, unrolling looks like this: 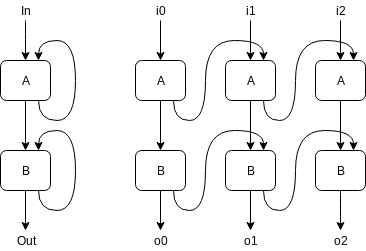 It is easy to see that the internal loops of the RNN and the superloop need to be unrolled at the same time: 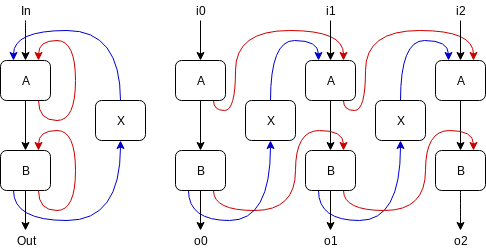 Builder is a base class that allows building the same connections between layers again and again, while reusing the layers themselves. This makes it possible to build an unrolled model easily. See builder.py.

The Model class is used by client code. It implements the (configurable) recipe for building the full model. See model.py.

We use SGU cells in the RNN part of the model. The SGU is implemented by a linear combination between the hidden state (internal input) and the (external) input, controlled by both inputs. 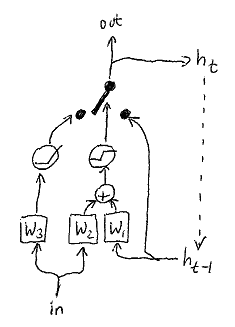 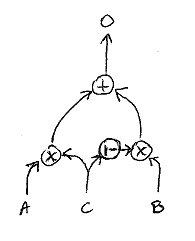 A superloop extension that allows the system to focus on different parts of the input.

The data the model operates on has N data locations, each of which is a 1D tensor. The model maintains an index that can be modified by at most -1. or 1. in each step. Its output is the same size as the data at one datapoint, and it combines the datapoint the index selects with the neighboring ones with a factor of 1/(1+d^2) where d is the distance between the index and the location of the datapoint.

A memory of multiple registers that can be used as an external system in a superloop.

There are D ("depth") registers, each W ("width") wide. The RNN part of the model can control writing and reading the registers, and receives the data read in the next timestep.