AMP has a well-developed permissions system that allows fine-grained control of what different users can do in AMP.

The permissions given to a particular user are determined by the role (or roles) that user is assigned to.

Users and roles can be created and configured at two levels:

Users and roles created at a particular application instance level can only be configured at that level.

Logically, the types of permissions available to be configured depend on the level being configured.

This means that, depending on what a particular user should be able to do, configuration may be required at both the ADS level and the application instance level.

By default, AMP creates a user (usually called admin) that is assigned the role of Super Admins. This user can control everything in AMP, at both the ADS level and each other instance level.

The Super Admins role should not be changed or deleted. Its function is also used by the instance manager itself to manage AMP.

In the Role Management submenus, you will see a number of expandable lists of particular functions that are available to assign permissions for.

At the right of each is one of three symbols, as shown in the screenshot below. 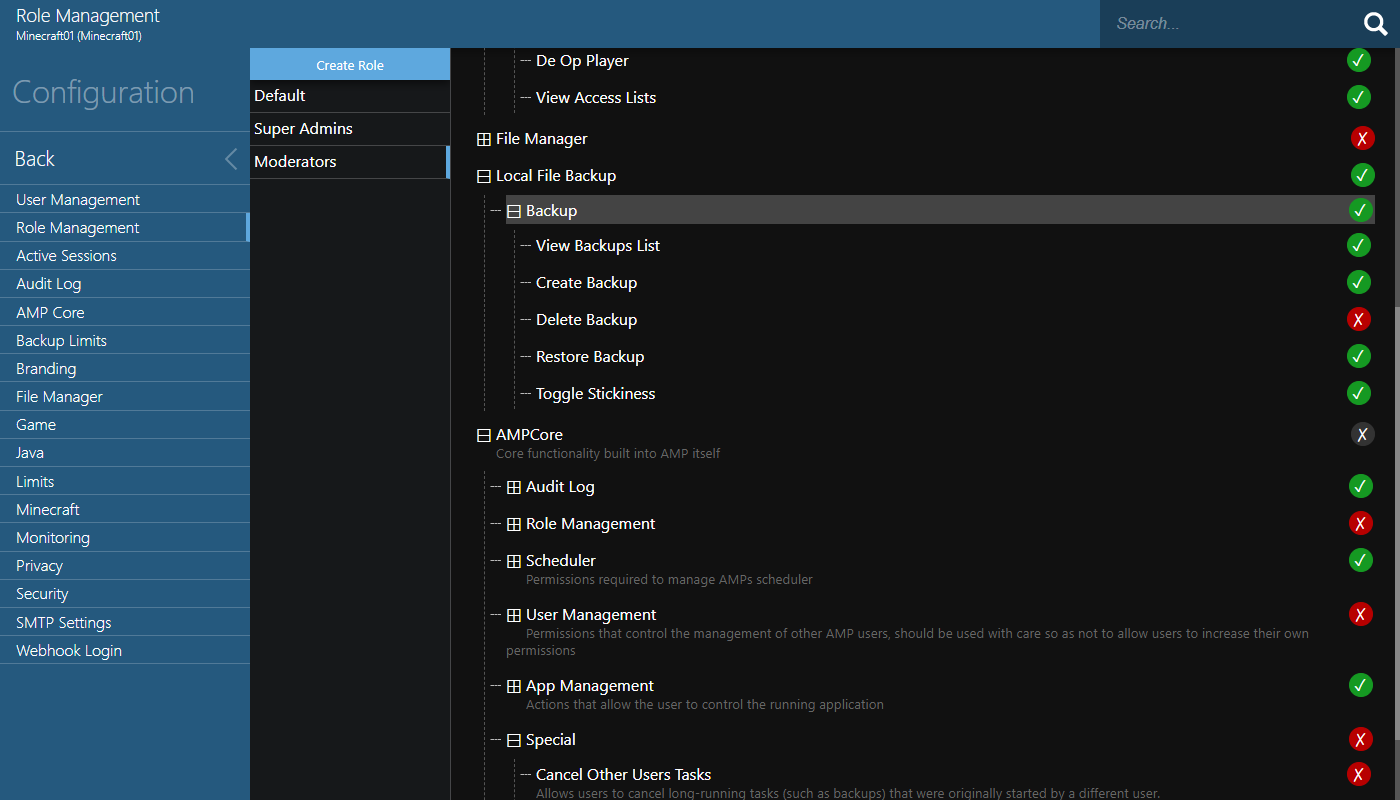 These symbols and their meanings are as follows:

Toggle between each option by clicking on the symbol.

Example - configure a user to manage an application instance

Say you have created a Minecraft instance and want a particular user to be able to manage some or all aspects of that instance.

You have a two main options:

If you create the user at the ADS level, you have a couple of options for how that user logs in to AMP:

This approach could be desired, for example, if the user is intended to manage several instances, or if you want the user to be able to do other things at the ADS level (such as upgrade or restart instances).

At the ADS level, at a minimum you need to allow the role to 'manage' the Minecraft instance - you can find this under the All Instances list.

Then, to allow the user to log in, you have two options. The easiest option is to provide the user with a specific URL for that instance. You can get this URL by right clicking on the instance, and selecting 'Manage in a new tab'. You will see in the new tab's broswer bar the URL for your AMP installation, followed by /?instance=xxxxxxx (with xxxxxxx being a sequence of numbers and letters). This is the URL for the Minecraft instance. The user can use that URL to log in.